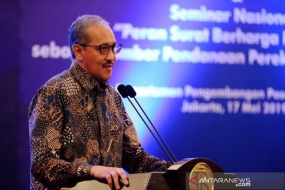 Bank Indonesia has sped up the issuances and transactions of commercial securities (SBK) as an alternative short-term nonbank source of funds.

This was achieved through the signing of an administrative agreement to settle SBK transactions between Bank Indonesia and the Indonesian Central Securities Depository (KSEI), on Friday 17th May 2019 in Jakarta. The move is consistent with efforts to stimulate the domestic demand for funds. The agreement signals the operational preparedness of SBK market infrastructure for SBN issuances and transactions, according to a statement from Bank Indonesia here on Monday.

The Deputy Governor of Bank Indonesia, Dody Budi Waluyo, stated his expectations that the various regulations and supporting infrastructure will enable SBK to play an important role as an alternative short-term funding solution for nonbank corporations, and as an attractive money market instrument for investors.

KSEI was approved by Bank Indonesia as the central custodian, in order to improve governance of SBK issuances and transaction settlements, particularly in terms of recording, administrating and settling scripless SBK transactions.

Moving forward, Bank Indonesia will strive to develop the SBK market by educating potential issuers through an outreach program.

Also, Bank Indonesia will coordinate with the Indonesian Financial Services Authority (OJK) to ensure there are no conflicts in enforcing regulations, specifically regulations for financial services institutions that may utilise SBK as short-term funding or an investment vehicle. (ant) 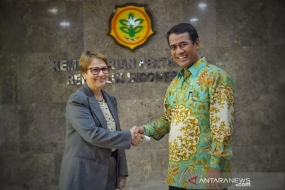 The Indonesian government has invited Brazil to invest in Indonesia's agriculture sector, especially in the development of the sugar industry. Possible investment in sugar has become one point of discussion between Indonesian Agriculture Minister Amran Sulaiman and his Brazilian counterpart, Tereza Cristina, in Jakarta, on Monday. Sulaiman said, as the world's largest sugar producer Brazil could invest and transfer its technology, especially in the field of sugar processing. "We discussed issues about sugar plants. Brazil's Agriculture Minister has said she would be open to sharing experiences in sugar processing and ready to help Indonesia. We know that Brazil is the world's largest sugar producer. They are eager to transfer their knowledge to Indonesia," Sulaiman said. In addition to the sugar industry, the government has also asked Brazil to open its market for Indonesian agriculture products, such as mangosteen and salak (snake fruit). "They have opened the chance for us to export six types of strategic commodities.There is no limitation on which commodities could be exported to Brazil," he added. During the meeting, the two ministers agreed that Brazil would accept exports of Indonesian commodities, such as snake fruit, swallow bird's nests, and pineapple, along with other commodities. "The most important thing is that our agricultural products will be accepted. Up until now, Indonesian exports to Brazil had touched US$0.3 billion per year, most of it contributed by palm oil," he said. Meanwhile, the Brazilian Agriculture Minister has asked Indonesia to open its market to the country's beef exports. Responding to the request, Sulaiman said that the government would have to consider the issue of food security before it decided to import Brazilian beef. (ANTARA) 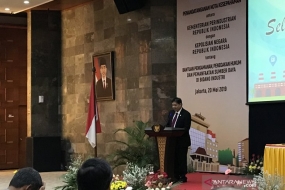 Indonesia's industrial sector is expected to grow more aggressively in the second quarter of 2019 compared to the previous quarter, particularly due to increased demand during the fasting month and the upcoming Eid al-Fitr.

"We are sure that the growth will be higher than the first quarter, which reached 4.5 percent. It is expected to reach 5 percent," Secretary General of the Industry Ministry, Haris Munandar, said here on Monday.

Munandar expressed his optimism that the business climate in the country would return to normal after the General Election Commission announces the election results, along with the coming of Eid al-Fitr.

Some industries, such as food and beverages and the textile industry, have reported a sharp increase since the start of the second quarter.

"With the incoming Eid, people spend their money. The textile industry, and food and beverage, will also enjoy a sharp increase. There is also more money in circulation, as employers have to pay Eid bonuses to their employees," he said.

Also, data from the Central Bureau of Statistics (BPS) showed that production of large and medium scale manufacturing industries in the first quarter of 2019 reached 4.45 percent year-on-year.

This growth was boosted by a sharp increase in production in the garment sector, reaching 29.19 percent with increased demand, especially in the export market. (ant) 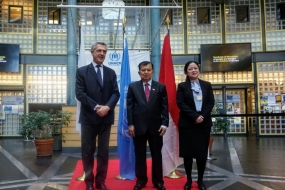 "(We discussed) how to jointly handle the extraordinary issue of refugees today, both in Asia, Europe, the Middle East, and conflict-plagued countries," Kalla said, while in Lausanne, Switzerland, on Thursday.

Kalla noted that Indonesia has experience in managing an influx of refugees, as it did in Galang Island, Riau Islands Province.

"I told him that we are ready to do so through international cooperation, rather than to work alone," he said.

While in Switzerland, Kalla also met with President of the International Committee of the Red Cross (ICRC) Peter Maurer. Kalla said the meeting with Maurer allowed him to discuss cooperation in humanitarian fields, such as disaster mitigation programs.

Kalla arrived in Switzerland on Tuesday to attend an event entitled, "The Christchurch Call to Action”, which included discussions of the latest terror attacks in New Zealand and Sri Lanka.