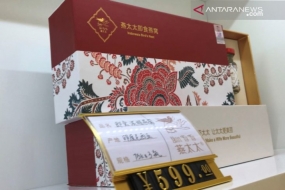 "These swift nest importers have met the standards set by the Chinese authority," Indonesian Ambassador to China Djauhari Oratmangun said, Beijing on Wednesday.

As of July 2018, there were 21 swift nest processing industries from Indonesia that had received CNCA certificates, with 70.6 percent being imported. Indonesia controlled 67.1 percent of total swift nest imports from three Southeast Asian countries, especially Indonesia, Malaysia, and Thailand.

"We are optimistic that Indonesian swift nest products will continue to be one of the leading export products in China," said Ambassador Oratmangun. (ant) 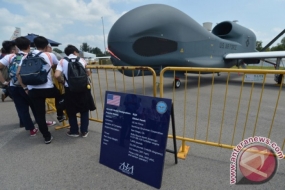 Indonesia and US Strengthen Cooperation on Unmanned Aircraft System

Indonesia and the United States continue working together in the transfer of knowledge and technology related to unmanned aircraft systems (UAS). The cooperation is part of the US-Indonesia Aviation Working Group, called "Strengthening Aviation by Incorporating Innovative Technology in Indonesia".

"I express my gratitude to the US government for their cooperation with the Indonesian government through the Aviation Working Group, which has been carried out since 2016. We really appreciate the close cooperation that was built between the two countries," the Transportation Ministry's director general of air transportation, Polana B Pramesti, said in a statement in Jakarta on Wednesday.

According to Pramesti, the use of drones or unmanned aircraft has been developing quickly, as they offer a variety of capabilities and sophistication, and the industry has promising economic potential.

"This is a challenge for regulators and requires special time to regulate air traffic management," Pramesti said.

"The general challenge lies in integrating manned and unmanned aircraft safely and efficiently, especially when they use the same airspace," she added.

With the Aviation Working Group, she expects this activity to provide a number of solutions to challenges, such as flight regulations related to the two countries, UAS technology updates and sharing related to the US Government in handling UAS operations, as well as discussions regarding Indonesia's infrastructure in facing developments of UAS, along with risks and supervision.

"As we know, the operation of the UAS has provided a number of benefits in various sectors, therefore the Directorate General of Air Transportation needs to support the operation of UAS, as long as it complies with the rules without overriding safety and security," Pramesti said.

US Ambassador to Indonesia Joseph R. Donovan said the working group aimed at strengthening aviation cooperation between the US and Indonesia.

"The aviation industry has an important role in Indonesia's development. Given Indonesia's geography, which has thousands of islands, the airline industry is quite reliable. Just like other economic sectors, the aviation industry must continue to develop, in line with technology. One of these sectors is the New Aviation System, the Unmanned Aircraft System. We, the US, see that UAS technology will have a significant impact on the aviation sector," he pointed out.

Donovan added, this was inseparable from the ability and advantages of UAS, which can send aid in a short time, be used to assist the development of the digital economy and e-commerce, as well as increase the reliability of economic development and infrastructure.

In this case, he continued, America is currently interested and committed to driving the aviation industry in Indonesia, a cooperation which is also supported by private companies and related stakeholders, such as the Federal Aviation Administration, the Transportation Security Administration (TSA), as well as the US Industry and Trade Ministry. (ant) 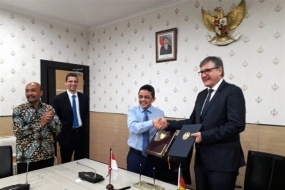 Indonesia and Germany inked a cooperation agreement under which four development projects will receive funding of 37 million euros in areas of effective governance, technical and vocational education and training, and environment and biodiversity protection. Indonesian Finance Ministry's Director General of Finance and Risk Management Luky Alfirman and German Ambassador to Indonesia Peter Schoof were present during the signing ceremony held at the Finance Ministry's office in Jakarta on Wednesday.

The German Federal Ministry for Economic Cooperation and Development (BMZ) will finance the total 37 million euros in grant funding for the four development projects in Indonesia.

"Indonesia, as one of Germany's global development partners, is a key player in tackling global development issues. Germany supports Indonesia's resolve in realizing the Agenda 2030 and its pledge to mitigating the impacts of climate change," Schoof remarked in a statement from the German Embassy in Jakarta on Wednesday.

Striving to promote good governance in Indonesia, both nations are collaborating in a joint project known as "Domestic Resources Mobilisation for Sustainable Development" that prioritizes fiscal and tax policy for financing infrastructure and social programs.

In the meantime, the cooperation project on "TVET System Reform" will back Indonesia's vocational education reform targeted at ascertaining competitiveness of the workforce in future and seeing that their skills are in tune with the labor markets demands by imparting high-quality education and training.

To address environment and climate change issues, Indonesia and Germany have collaborated in a project on "Peatland Rehabilitation and Management" involving the North Kalimantan provincial government for ensuring the sustainable management of the peatland ecosystem in the Kayan Sembakung Delta by getting representatives of the private sector, villages, and the civil societies involved in this endeavor.

The funding will further help in financing the joint collaboration project on "Sustainable Agricultural Value Chains in Indonesia" to recognize alternative sources of income to timber and palm oil for smallholders that are both domestically and internationally profitable and that can avert further deforestation in Indonesia.

Germany's contributions for the four projects will be implemented by the National Development Planning Agency (BAPPENAS) and the relevant
Indonesian ministries and sub-national institutions, supported by GIZ, a major German development agency.

Director General of Finance and Risk Management Luky Alfirman remarked that today's agreement mirrored the close and deep relations between both nations.

"We have a long-standing history of cooperation and are keen to take our successful cooperation to the next level in terms of seeking sustainable solutions to Indonesia's core and global development issues," he remarked. (ant) 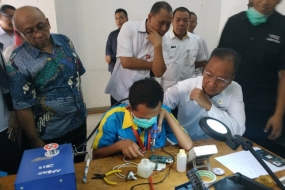 Social Affairs Minister Agus Gumiwang Kartasasmita has minced no words in his pledge to offering working capital to those graduating from the Vocational Rehabilitation Agency for the Disabled looking to build their businesses.

"I am planning to formulate a policy under which we will furnish working capital to people, who graduated (from training) and looking to start their own business," Kartasasmita remarked following an inspection of the Vocational Rehabilitation Agency for the Disabled (BBRVPD) in Cibinong, West Java, on Wednesday.

Kartasasmita has made assurance that working capital, totaling Rp5 million, will be offered for each unit of productive business and Rp20 million per group for group business.

"The fund will not essentially be derived from the state budget. We are keen to witness the emergence of new entrepreneurs here, and I believe that you can compete," he affirmed.

Kartasasmita, in the company of Director General of Social Rehabilitation Edi Suharto, Secretary General of the Social Affairs Ministry Hartono Laras, and other ministry's officials, witnessed up-close the training facility for the disabled in Cibinong.

Kartasasmita remarked that the training will hone the skill sets of people with disabilities to encourage them to become self-reliant. In 2019, the ministry has offered assistance to 22,500 disabled individuals to develop their skills. (ant)