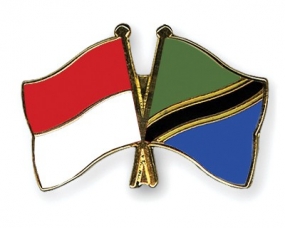 Indonesia is ready to take part in Tanzania`s industrialization efforts to become a middle-income country in the near future. The statement was conveyed by the Indonesian Ambassador to Tanzania, Burundi, Rwanda, and the Comoros Union, Ratlan Pardede, in remarks at the 73rd anniversary of Indonesian Independence in Dar es Salaam on September 14, 2018."Apart from the challenges faced by the international community, Indonesia is ready to work with all partners around the world, including Tanzania, to maintain all the positive economic progress we have enjoyed in the past 10 years," Ambassador Ratlan remarked in a written statement to Antara in Jakarta, on Saturday.In the event, which was attended by about 200 people from the diplomatic community in Dar es Salaam, government officials, businessmen, the Indonesian community in Tanzania, and Zanzibar State Minister, Issa Haji Ussi Gavu, the Indonesian ambassador, conveyed several important matters related to the bilateral relations between the two countries. Several advances in the bilateral relations between Indonesia and Tanzania were demonstrated by the participation of Tanzanian government and business representatives at the Indonesia-Africa Forum in April 2018 and the visit of Zanzibar President Ali Mohamed Shen to Indonesia to explore more economic opportunities for Indonesia and Tanzania."The volume of trade between Indonesia and Tanzania has increased exponentially from $274.3 million in 2016 to $303.4 million in 2017, an increase of 35.2 percent," Ratlan remarked.Furthermore, he also explained the ongoing cooperation in the development of human resources and the agricultural sector between Indonesia and Tanzania, especially regarding the provision of scholarships to study in Indonesia as well as the establishment of Agriculture and Rural Training Centers (FARTCs) in Mkindo, Morogoro.In Zanzibar, Indonesia also collaborated with the Zanzibar government to present Indonesian seaweed experts in conducting training to bring added value to seaweed."Realizing the importance of the agricultural sector as a basic foundation for economic development since 1980, Indonesia remains committed to support the development of Tanzania`s agricultural sector," Ratlan revealed.In his remarks, Zanzibar State Minister Issa Haji Ussi Gavu emphasized the importance of the two countries to not only share the past but also the future."Along with bilateral political ties, there are also formal economic relations. Thanks to this effort, the two countries have tried to consolidate not only political cooperation but also economic cooperation related to the bilateral relations that have been established," Gavu noted.Further, he added that relationship of giving and receiving between the two countries was also reflected in the people-to-people cooperation whose benefits proved mutually beneficial.The Indonesian Embassy in Dar es Salaam will continue to maintain its commitment to enhance bilateral cooperation in various sectors between Indonesia and accredited countries to a higher level. (ant) 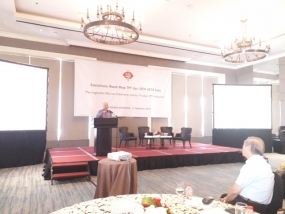 Minister of Trade Enggartiasto Lukita said that textile is the 3rd biggest mainstay foreign exchange after tourism and palm oil.  At the discussion of Indonesian Textile Association-API with the theme “Enhancement of Indonesian foreign exchange” through national product of textile and textile product that took place in Bandung, West Java, on Friday, he said that textile and textile product keep growing and developing coinciding with fashion growth and digital era. He also said the product is Indonesian mainstay export product which grows continuously without relying on material and import product, and it has the biggest market in Indonesia.

“One of the most effective ways is by enlivening national market. On one side, export has big opportunity. So, we see that they have a huge opportunity. Therefore, they are setting road map, including investment. Then, they will explain what is requested from the government of Indonesia. What facility, regulation and business situation are needed to attain our export target  to be US $30 billion dollars and domestic need,” said Minister of Trade Enggartiasto Lukita 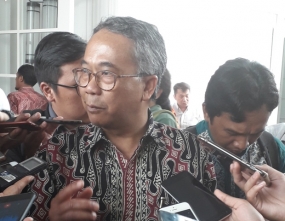 Businesspeople Target Textile Export Worth 30 Billion US Dollars in 2025

General Chairman of Indonesian Textile Association -API , Ade Sudrajat said that Indonesian textile export is predicted to reach US $30 billion dollars in 2025. After attending a discussion with the theme “Increase Indonesian foreign exchange through national product of textile and textile product, he said that businesspeople are now analyzing road map to achieve the target. On Friday (14/9), he said, API is optimistic that the target can be achieved because the demand from the international world is getting increased and over the last 2 years, the textile export and textile product of Indonesia have increased.

“Firstly in 2017, it increased 5 percent. Then, in 2018, it increased again to be 8 percent while it never boosted at previous period. If possible, it can increase 100 percent. We also enhance our export to be US $30 billion dollars. So, the investment opportunity is also huge,” said Ade Sudrajat.

Moreover, Ade Sudrajat also said that an important step to encourage textile export is by  widely promoting market access. The innovation of road map for textile industry and textile product is also necessary to respond uncertainty of the global trade. He also explained that the road map will answer the challenge in national industry and also foreign market access. (Skr/Trans by AF/RHM) 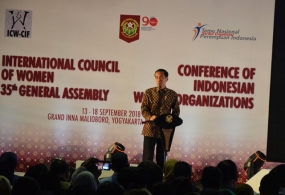 President Joko Widodo officially opened 2 women's meetings in Yogyakarta on Friday. The meetings are the 35th General assembly of the International Council of Women -ICW and the first national meeting of a thousand leaders of women's organizations from all over Indonesia. The President assured Indonesian women that Indonesia is a large country and it has a lot of women with great achievements. The government has 8 women ministers in the cabinet and this proves that the present government is very concerned on Indonesian women. Thus, President Joko Widodo calls for them to sincerely contribute for Indonesian nation.

Meanwhile, Chairwoman of Kowani, Giwo Rubianto Wiyogo said that actually, the task of being a mother of the nation is an honor because the mission is to prepare a superior, characteristic and competitive generation of the nation. The concept of the nation’s mother has been proclaimed by women fighters before Indonesian independence.

“Indeed, the role of the mother of the nation is not a burden, but it’s something honorable by preparing young generation with character, excellence, competitiveness, innovation, creativity and having a militant national insight. And we do not want Indonesian women who have had the concept of the mother of the nation since 1935, before independence, if they are called ‘emak-emak’ or housewives,"said Giwo Rubianto Wiyogo.

The one thousand leaders meeting of women's organizations throughout Indonesia was first held by Kowani and supported by 15 state-owned enterprises. The meeting was held in conjunction with the 35th general assembly of the International Council of Women -ICW, the world women's organization whose age is now 130 years. (RRI Jogjakarta/Munarsih/Trans by Rhm)