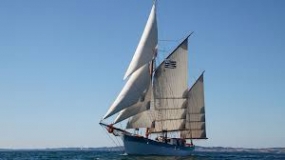 " Of course, the high sea ship fleet of Switzerland is now competence whatsoever, to Indonesia, the great archipelago with the second largest coastline in the world and which is going to be global maritime fulcrum", Yvonne said.

She added, "Of course, this is a fleet of highly capable Swiss ships, present in Indonesia, a large archipelagic country with the largest coastline in the world and a country that will become a global maritime axis".

In addition, Ambassador Yvonne Bauman said that the Port of Sunda Kelapa, Jakarta was chosen as the Fleur de Passion aboard location, because it has a long maritime history, both in Indonesia and the world as a whole. Before stopping in Jakarta, Fleur de Passion aboard first stop in Ternate, North Maluku, November 2017 // Ternate is one of the ports that Ferdinand Magellan visited on its voyage in 1521. The entire Fleur de Passion voyage mission is carried out by the personnel of The Ocean Mapping Expedition program initiated by The Foundation Pacifique, a non-profit organization based in Geneva, Switzerland, engaged in social-humanities, environmental, and scientific research. (VOI-Rezha) 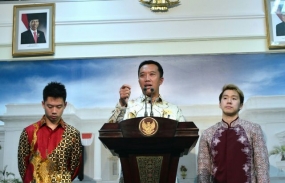 President Joko Widodo hoped Indonesia's doubles pair of the world's number one Badminton players, Kevin Sanjaya and Marcus Gideon can maintain their best performance in Asian Games 2018. This was stated by Minister of Youth and Sports, Imam Nachrowi after accompanying Kevin/Marcus to meet President Joko Widodo at Merdeka palace, in Jakarta, on Monday (2/4). Imam Nachrowi said that the best achievement of Marcus Gideon and Kevin Sanjaya, Indonesia's doubles pair of the world's number one in All England in March 2018, received high appreciation from President Joko Widodo. The President also pays attention to the preparation of the two players.

Meanwhile, Kevin Sanjaya mentioned that the meeting with President Jokowi has given motivation to them so that they can give their best in the next Asian Games. On the occasion, Marcus also stated that preparation will continue to be conducted not only for Asian Games 2018,  but also for other competitions, such as Thomas Cup 2018. Indonesia's doubles pair Kevin Sanjaya and Marcus Gideon have recently become the champion in the prestigious world badminton competition, All England 2018. Marcus and Kevin are Indonesia’s top athletes for gold medal in Asian Games 2018. (KBRN/Pradipta/Trans Yati/NITA) 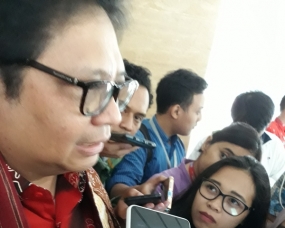 The Ministry of Industry to Promote Prisoner’s Products Through "Marketplace"

“Almost everything, as well as the ministry has done training for e-commerce. Of course, it is connected with prisoners products which have been produced sustainably. Well, one of them was delivered earlier, the gel pen. So, they will produce continuously. Of course, with the e-commerce they just sell their product and list it in the marketplace,” Airlangga Hartarto said.

In addition to marketing the products of prisoners' work through the "marketplace", according to Airlangga Hartarto, the Indonesian Ministry of Industry continues to develop a coaching pattern, whether related to technical guidance, equipment assistance, and business management assistance. Some of the technical guidance are conducted to the targeted prisoners in Women's Penitentiaries in Tangerang, Banten and Pondok Bambu, Jakarta. (VOI/Rezha/AHM)

Director of Strategy and Portfolio of the Finance Ministry Scenaider Siahaan said debts are needed by the government to finance priority projects such as infrastructure projects and human recourse development. In a discussion held by Indonesian Association of Alumnus of Indonesian University (Iluni) in Jakarta, on Tuesday, Scenaider delay of priority projects could result in higher cost of implementation in the future. He said the government spending is for improvement in productivity and quality of the people through investment in human resources, health facility and education."Now many people have been free from illiteracy that the quality of human resources has improved," Scenaider said.He said improved quality of the people would be result in higher productivity that contribute to economic growth."In turn it would increase tax revenues that could be used to repay the debts. We think the present tax revenues are safe and would be healthier ahead," Scenaider said.Based on official record of the Finance Ministry, the government debts by the end of February 2018 reached Rp4,034.8 trillion or 29.2 percent of the country`s GDP. The debts included Rp3,257.26 trillion in state bonds (80.73 percent) and Rp777.54 trillion in loans (19 percent)."In the past, the main sources were loan, now is state securities as loans have limitations that could not meet our requirements in development," Scenaider added. ( antara )