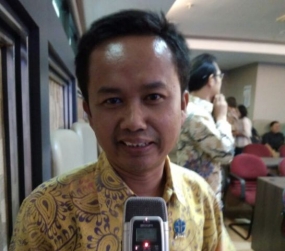 The acts of terrorism occurred recently in Surabaya, East Java, makes Indonesian government improve concrete efforts to overcome the deadly acts. This was said by Researcher of  Center for Regional Resources Research of the Indonesian Institute of Sciences (LIPI), Cahyo Pamungkas to RRI World Service -VOI after Public Discussion themed Eradicating Terrorism Network at LIPI's Building in Jakarta on Thursday   (17/05). He hoped that Indonesian government can improve observation toward social media which has been one of roots of problem from radical acts. He also said that the government has not been optimal in handling the dissemination of ideology with violence  narration through social media.

Cahyo Pamungkas further explained that the prevention of terrorism ideology growth can be done through de-radicalization strategy to the family of terrorists. He also said that this can be implemented through many approaches psychologically and socially or by empowering approach through special education. (VOI/AF/RHM)

Al-Azhar University in Cairo, Egypt again declared its commitment to the government and people of Indonesia in developing a moderate and open-minded Islam. It was conveyed by Grand Sheikh Al-Azhar, Ahmad Mohamed Tayeb in his meeting with Indonesian Ambassador to Egypt, Helmy Fauzi, Vice Chairman of Indonesian Mosque Council, Police Commissioner Syafrudin, and Indonesian Muslim Intellectualist Komarudin Hidayat in Cairo on Sunday, May 13th. Helmy Fauzi recently said to Radio Republik Indonesia (RRI) in Cairo that Al-Azhar had agreed to help Indonesia in the form of training for mosque management, clerics, and curriculum development and placement of Al-Azhar lecturer at International Islamic University of Indonesia. The Indonesian mosque administrators will be trained in Al-Azhar Cairo for 1-2 months. During the training, Al-Azhar will provide actual materials, such as terrorism, women's issues, and fanatical groups.

“The strengthening of Indonesian Mosque Council, training of mosque officials is focusing on mosque management, capacity building to improve the priest's ability in the mosque. Because  mosque is a place where people ask about various issues about Islam. Well, Al-Azhar will assist the training of clerics and mosque administrator,” Helmy Fauzi said.

Meanwhile, Grand Sheikh Mohamed Tayeb revealed that Al-Azhar currently is needed to intervene and help Indonesian Muslims to ward off the infiltration of new groups. 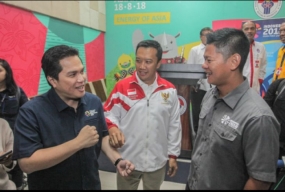 Asian Games 2018 is a Tool to Unify the Nation

The 2018 Asian Games which will be held in Jakarta and Palembang, South Sumatra in August and September are expected to be a momentum to show the world the role of sport as a unifying and peacemaking tool for the nation.  Especially, in a few days ago some areas in Indonesia became the target of terrorist’s acts. The General Chairman of Asian Games 2018 Organizing Committee (INASGOC), Erick Thohir told media in Jakarta recently that the role of sports, especially the Asian Games as a unifying tool of the nation has been proven when Indonesia became host of the fourth Asian Games in 1962.

“Sport is a unifier and it has been proven in 1962 by our first president, Pak Soekarno. At that time, we were just celebrating 17 years of independence and recognized as independent country. Well, now are celebrating our 73th  independence, we are older than before.  We hope this Asian Games will be successful. But, without people’s participation it cannot run well,” Erick Tohir said.

Meanwhile, Chairman of the Indonesia Asian Para Games 2018 Organizing Committee (INAPGOC) Raja Sapta Oktohari on the same occasion stated that the committee along with the government and society is ready to make Indonesia a good host for the athletes with disabilities. Through Asian Para Games 2018, Indonesia wants to show itself as a friendly country for disabled people. He said  Asian Para Games is not just a match with win or lose result.  It shows how to embroider the values of humanity, peace, and unity. The 2018 Asian Games will be held on August 18th to September 2nd, while the 2018 Asian Para Games takes place from 8-16 October. (VOI/Rezha/DP) 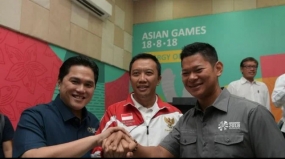 A series terrorist attacks in Surabaya and Sidoarjo, East Java some time ago certainly will not disturb the preparation of Asian Games and Asian Paragames 2018 which will be held in Jakarta and Palembang, South Sumatra soon. In relation to security issues, the Indonesia Asian Games 2018 Organizing Committee (INASGOC) and the Indonesia Asian Para Games 2018 Organizing Committee (INAPGOC) will continue to coordinate with the government and the security agency so, the four-year grand event can run well.

“We, the government of Indonesia, INASGOC, INAPGOC and the people remain confident and optimistic, with the preparations already undertaken by Mr. Erick, Mr. Okto and the entire Asian Games and Asian Paragames organizing committee. Of course, in terms of security and comfort we will continue to coordinate with the relevant parties and we also request the support of all Indonesian people so that Indonesia gets success, and can give confidence to  international community that Indonesia is a country that deserves to be a good host for big multievent such as Asian Games and Asian Paragames. Indonesian Minister of Youth and Sports Imam Nahrowi to the media in Jakarta, recently.

Meanwhile, Chairman of INASGOC, Erick Thohir stated that security during the Asian Games and Asian Paragames 2018 will be managed in accordance with international standards. In addition, he affirmed that all parties involved in the implementation of the event must have an accredited identification. This will be applied to people who want to watch live in the venue of the match. (VOI/Rezha/DP)