Indonesia's rowing team grabbed the gold medal in the men's eight lightweight final at the Jakabaring Sport City in Palembang, South Sumatra, on Friday. The Indonesia men's rowing team finished first in the 2,000-meter race in 6 minutes and 08.88 seconds. The Uzbekistan team, which clocked 6 minutes and 12.40 seconds, had to settle for the silver medal. Hong Kong, China, won the bronze medal with a time of 6 minutes 14.46 seconds (antara) 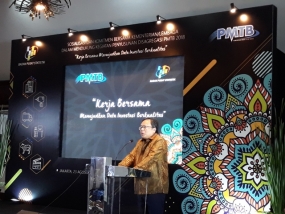 Indonesian Minister of National Development Planning (PPN) / Head of the National Development Planning Agency (Bappenas) Bambang Brodjonegoro said that a country's economic growth should not only be supported by consumption alone. Consumption is considered only to have an economic multiplier effect, but it cannot encourage the economic growth. This was conveyed by Bambang in his presentation at the 2018 Gross Fixed Capital Formation Disaggregation (PMTB) activity held by Indonesian Statistics Agency (BPS) in Jakarta, Thursday (23/8).

"We as a planning institution certainly want to direct Indonesia so that Indonesia has high quality economic growth. And the most important thing is that Indonesia can jump, get out of the middle income trap. And that needs high growth. This high growth can not only rely on the consumption. Because if we rely on the consumption, we must be honest, the data submitted by Pak Kecuk when we are in the second quarter seems to be somewhat relieved because of 5.27 percent economic growth. But we must be honest that there are efforts to increase consumption both naturally because of the holidays and fasting and second because there are annual bonuses. The only problem is we don't want the economic growth to be high when the government disbursed the annual bonuses," Bambang said.

Bambang continued, one of the sources of the economic growth that Indonesia could rely on besides consumption was investment. The incoming investment will later create jobs, so that it will encourage public consumption. Not only that, investment also encourages productivity, so that there is a possibility that net exports will also be boosted. If both things improve, it is guaranteed that the economic growth is getting better. However, Bambang said investment growth needs to be supported by an adequate strategy. One of these strategies can be achieved through the preparation of comprehensive or comprehensive Fixed Capital Formation Disaggregation (PMTB) data. (VOI / Rezha/AHM) 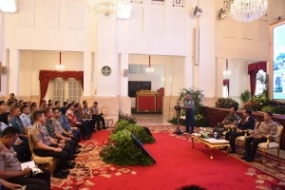 The President Reminds the Importance of Maintaining Political and Security Stability

President Joko Widodo reminded the importance of maintaining political stability in the country to guarantee the investment security. This was conveyed by President Joko Widodo when giving directions to Indonesian National Army Staff and Command School Students and Participants in the 2018 National Police Staff and Leadership School, Thursday at the State Palace, Jakarta. On the occasion, the President said that Indonesia as a large country is rich with ethnic, culture and language diversity. According to him, this strength must be utilized as a force in promoting national development and should not be regarded as a threat because of mismanagement.

Furthermore, President Joko Widodo said that Indonesian security forces also have a responsibility to safeguard the investments spread throughout Indonesia until the remote areas. According to him, efforts to maintain the security of these investments will have an impact on increasing national economic growth. In addition, the President also reminded the Indonesian people to be developed according to the times. This is due to the rapid technological development that must be caught up if the Indonesian people do not want to be left behind by other nations in the world. (VOI/NDY/AHM)

The government would start the post-earthquake reconstruction of damaged buildings in Lombok Island in West Nusa Tenggara in early September, Indonesia`s Public Works and Public Housing Minister Basuki Hadimuljono said."We will start it in September. We only have two weeks left to prepare," Basuki noted, after his scientific oration at the Indonesian Institute of Science (LIPI) in Jakarta, on Thursday.On Monday (Aug 27), a group of 150 students from the Faculty of Engineering of Mataram University and Gadjah Mada University would be sent to the island to give training on the Simple Healthy Instant House (RISHA) construction. Basuki elaborated that the government would not build temporary settlement, but it would provide tents for victims of the earthquake. It would also speed up the building reconstruction process."Development of the houses would be accelerated. We will try to finish it within six months. People would build their own house under our mentoring," Basuki remarked.The government has asked the Indonesian Chamber of Trade and Industry (Kadin) to open building material kiosks in each subdistricts in Lombok Island and its neighboring province of East Java."The logistical supply could be taken from Surabaya (in East Java). They have Semen Gresik (cement factory) and steel manufacturer," he revealed, adding that development of one RISHA would take a month.Previously, President Joko Widodo noted that the government has provided Rp50 million and Rp25 million of aid for rehabilitation of severely damaged and light damaged houses, respectively. Eight state-owned enterprises have begun the reconstruction of hospitals, markets, and schools in the region."We have dispatched some equipment for reconstruction. We have set the target to finish the reconstruction process in December," Basuki pointed out. ( ant )