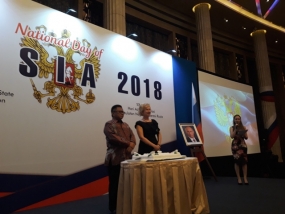 Indonesia is an Important Partner for Russia

“Russia in Indonesia have a long history of relationship, through this strictly based on friendship, mutual understanding and the dialogue. As the natural demonstration about perfect political relationship was Russia support to Indonesia to be elected as non permanent member of UN Security Council for the period of 2019-2020. We councily congratulate Indonesia on this victory and wish all success in implementing its political agenda in the framework of international manifestion. Indonesia is one of main partner in the Asia Pacific region and among ASEAN Countries,” Lyudmila Vorobieva said.

On the same occasion Ambassador Vorobieva also congratulated Indonesia that will host the 2018 Asian Games in August. According to her, the 2018 Asian Games has significance for Russia because the main activities will be performed at Gelora Bung Karno (GBK) Stadium, Jakarta which was built by the Soviet Union from the special request of First President Sukarno in 1962. Ambassador Vorobieva also thanked the presence of one of President Soekarno's daughter, Rachmawati Soekarnoputri in the event. (VOI/Rezha/DP)

"Finally, after a long time in Istora we can win, I was tense first because there were a lot of spectators, but in my heart there is confidence to win, because we can apply our game pattern," said Tontowi.

"Actually I am happy at the same time sad because this possibility last time I compete in Indonesia Open We are glad to be able to give title, Istora mythology haunted for Owi / Butet have no need to be discussed again, paid in full," said Liliyana.

"The meaning is great for us, honestly even though I say do not want to think, but still think I can not win in Istora?" he added.

Liliyana revealed that although they are ahead 9-1 in the meeting record, but they do not want to be careless and keep preparing themselves by studying the opposing game video.

"They must be disturbed by the crowd of supporters, especially I read Goh's statement about fighting a stadium, maybe he's also shaking against that much supporter," said Liliyana.

Meanwhile, Chan / Goh wishes they had another chance to meet Liliyana before he retires. Chan / Goh hopes to win the game and improve their meeting record to 2-10.

"I was having trouble talking to Chan, the crowds put a lot of pressure on us, we did not play well, we were not satisfied with our performance, and the short and long service they combined made us confused," Goh said.

"Actually we want to try to play one hundred percent but we have already lost, but the opponent is heavier, after the Olympics, Tontowi / Liliyana still look consistent while we are still unstable," Chan added. 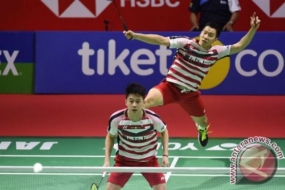 The first-ranked pair came out as the champion after defeating Japanese pair Yuki Kaneko/takiti Inoue 21-13,21-16 in the final round and ran away with a total cash prize worth US$1.26 million.

This was the first champion title won by Kevn/Marcus at Indonesia Open ending a four-year absence of champion title from the men`s double event since 2013 after Hendra Setiawan/Mohammaf Ahsan`s.

The victory was the fourth against the Japanese pair after the last meet at Japan Open in 2017. (antara) 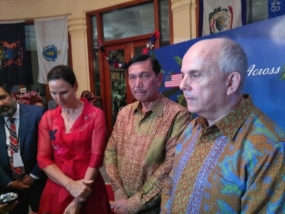 United States Ambassador to Indonesia Joseph Donovan in Jakarta on Wednesday stated that the 4 of July celebration also aimed to celebrate relationship between the United States and Indonesia. According to him, cooperation between the two countries was built on the basis of basic values, tolerance, mutual respect, and upholding the rights of its citizens. Joseph said that, the United States also expected an increase in relations with Indonesia, especially in marking the 70 years of bilateral relation of the two countries in 2019.

"I hope the United States and Indonesia will be cooperating on our 70th year of anniversary. And I think the great way to begin that cooperation and that celebration is when we moving to our Embassy building later on this year," said Joseph Donovan .

Meanwhile the Indonesian Coordinating Minister of Maritime Affairs Luhut Binsar Panjaitan stated that both countries should be able to increase cooperation in the maritime and environment sector. He believed that both Indonesia and the United States has plenty of rooms to enhance cooperation in that sector, for instance related to plastic and marine debris. (KBRN/Retno/Trans/Ndy/AHM)