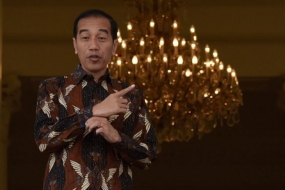 President Joko Widodo pointed to uncertainty in the current global economy conditions, thereby making it difficult to predict and compute.

"I think all regents here also sense the uncertainty in the global economy that is really difficult to compute," Widodo remarked at the Presidential Palace of Bogor on Thursday.

Widodo, who was accompanied by Minister of State Secretary Pratikno, stated that the government should deliver information related to economic growth.

"In terms of economic growth, we have to highlight the fact that the current global economy situation is still in a precarious position," he added.

However, the head of state believes Indonesia should be grateful, as economic growth is still reaching some five percent.

Other countries and also developed nations have experienced a drastic fall in economic growth.

"For instance, China's economic growth fell from 11 or 10 percent to 6.5 percent," he pointed out.

The head of state noted that the condition is a burden on the country.

"However, we want our economic growth to be good, so that our economic fundamentals and foundations become strong, whatever will be," he conveyed. (ANTARA) 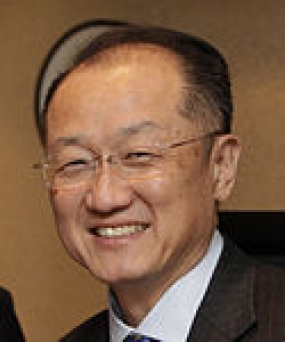 Kalla and Kim are scheduled to visit the village of Dakung in sub-district of Praya Tengah, Central Lombok to see healthcare facility and meet the villagers to discuss ways of coping with stunted growth of children.

On Wednesday, Kim and President Joko Widodo visited the village of Caringin, in West Java for similar purpose. (ANTARA) 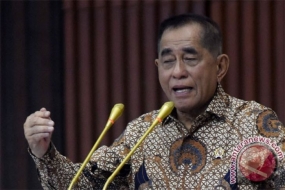 Defense Minister Ryamizard Ryacudu expressed hope that the 2019 presidential election would run in a safe and orderly manner.

"Thank God. The simultaneous regional head elections on June 27, 2018, has been implemented in a safe and orderly manner. It demonstrates that our society can be obedient and orderly. I hope such a conducive situation would also be maintained in the presidential election," he noted during a briefing to some one thousand soldiers of the military command of Iskandar Muda in Banda Aceh, Aceh Province, on Wednesday.

Ryacudu, who is also the former Army chief of staff, noted that as long as there is no provocateur, the Indonesian people can act in an obedient and orderly manner.

The preparation stage of the 2019 presidential election will begin, with the registration for presidential and vice-presidential candidates on Aug 8-14.

"We need to closely monitor various developments in the situation, so that we can take precautionary measures against all possibilities that could affect the stability and security of the nation," he stated.

He affirmed that the Indonesian Defense Forces (TNI) should remain neutral during the election.

"The TNI must be neutral and maintain loyalty and professionalism," he noted.

He emphasized that the Indonesian people should be mindful of the fact that the final goal of the political year is essentially to elect a leader.

"As devout religious people, we should perform Istikharah Prayer to get a trustworthy leader to serve the people. Do not choose someone just since you got money from the person," he stated. (ANTARA) 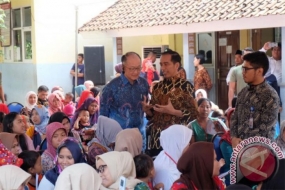 "President Kim, our focus today is to tackle the problem of stunting in children," Jokowi stated while paying a courtesy call on Kim at the Bogor Presidential Palace on Tuesday.

"This issue is very important to me personally and also for you and the public. I hope that a breakthrough is achieved to overcome this problem. We all know what to do but how can it last forever?" he reiterated.

Jokowi suggested several possible ways to tackle the stunting problem through the use of technology and the involvement of the private sector and civil society.

"We live in the 21st century, which is the era of rampant usage of smartphones and social media as well as the widespread use of unmanned aerial vehicles and artificial intelligence. I believe that such current developments can be utilized to build a mechanism for finding solutions to the issue of stunting, as sophisticated technology is already available," he stated.

"I am afraid that if we are too dependent on the government, the development process will be very slow. There is no other way than to involve the private sector to make sustainable efforts with initiatives from the community," he emphasized.

In addition to discussing social issues, Jokowi extended his congratulations over the Independence Day of the United States that falls on July 4.

"I would like to convey Happy 4th July to President Kim. We are honored that you celebrate Independence Day of the United States in Jakarta this week," he stated.

The World Health Organization (WHO) has estimated that a total of 178 million toddlers experienced stunting in the world.

Stunting is a chronic nutritional problem caused by poor nutrient intake for long periods, generally due to poor dietary intake. Stunting takes place in the womb and is only visible when the child is two years of age.