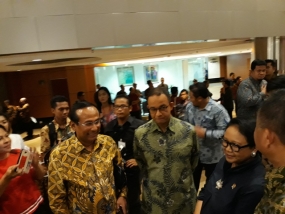 Minister of Foreign Affairs Republic of Indonesia, Retno Marsudi opened the Indonesia Channel 2018 show entitled "The Colors of Beautiful Indonesia" at Taman Ismail Marzuki Grand Theater, Jakarta, Wednesday, July 4th. Indonesia Channel 2018 is a colossal cultural performance of 72 Indonesian friends from 44 countries participating in the Indonesian Art and Culture Scholarship Program (BSBI) 2018. The event was simultaneously held to close the scholarship program which has lasted for three months. In his speech, Minister Retno Marsudi said the program is a form of Indonesian soft diplomacy to promote world peace, tolerance and harmony.

"This is the power of soft diplomacy, remember always, soft power charms and disarm, as advances humanity and its potential for a saver, peaceful and more pleasant life. This is the type that Indonesia wants to promote in the midst of the evolving and dynamic challenges that the world is facing today. Hence, this program has become more relevant as one of Indonesian contribution to the world and promoting peace, tolerance, and harmony," Retno Marsudi said.

Minister Retno Marsudi added that out of a total of 72 Indonesian Art and Culture Scholarship Program (BSBI) 2018participants, 13 of them chose to remain in Indonesia and learn more about Indonesian art and culture. They plan to learn bamboo musical instruments and Balinese dance art. In addition, one of them will also write a book about his experience during the BSBI 2018 program. The performance of Indonesia Channel 2018 is an artistic and cultural performance of the study participants of BSBI 2018 program who have different language and cultural backgrounds. For three months BSBI 2018 program participants practiced in Sanggar Semaradana Denpasar, Bali; Rumata Cultural House, Makassar, South Sulawesi; Sayu Sayu Gringsing Studio, Banyuwangi, East Java; Yayasan Seni Gubang, Kutai Kartanegara, East Kalimantan; and Art Studio, Music, and Dance Syofyani, Padang, West Sumatra. In addition, the National Development University (UPN) Veteran Yogyakarta is also involved in the training of BSBI 2018 program participants. (VOI/REZHA/AHM) 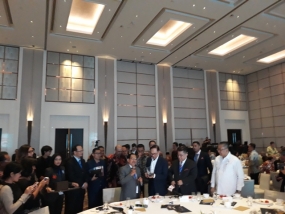 Former Prime Minister of Malaysia, Datuk Seri Anwar Ibrahim who is also the leader of the Malaysian government coalition ‘Pakatan Harapan’ visited Indonesia. On his visit, Anwar was invited to attend the Executive Center for Global Leadership (ECGL) in Jakarta on Wednesday, July 4 as a keynote speaker on political leadership. On the occasion, he mentioned about the first state visit of Malaysian Prime Minister, Mahathir Mohamad to Indonesia some time ago. He said that the visit will further strengthen the relationship between Indonesia and Malaysia and has a positive impact on cooperation in various fields, especially economy that is the main focus of Prime Minister Mahathir.

“This Doctor Mahathir came to Jakarta and his focus is to tie up economic cooperation between Malaysia and Indonesia. Besides investment and import-export,  I also develop cultural, and educational sectors, and these sectors are beneficial to both sides. And the spirit of friendship is that Mahathir showed in his last visit last week. And some of his speeches and his joint resolve with President Joko Widodo for me give  positive and stronger developments,” Anwar Ibrahim said.

Earlier, Anwar Ibrahim first held a special meeting with the 5th President of the Republic of Indonesia Megawati Soekarno Putri. He also met a number of businesspeople from Serantau Business Council and Indonesian political figures. Anwar Ibrahim is currently projected to become the 8th Prime Minister of Malaysia in 2020 to replace PM Mahathir who is now 92 years old. (Rezha/Trans/Ndy) 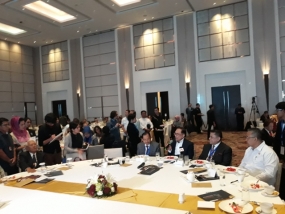 Malaysian politician and former Malaysian Deputy Prime Minister Datuk Seri Anwar Ibrahim expressed his views on business relations between Indonesia and Malaysia in a leadership forum organized by the Executive Center for Global Leadership (ECGL) in Jakarta on Wednesday. On the occasion Anwar stated that cooperation between the two countries could be strengthened, as long as the two countries could walk on same basis, especially in terms of leadership.

Anwar Ibrahim further said that the relationship between Indonesia and Malaysia has been running well. Relations between the two countries continue to show a positive value. Both countries are still supporting each other for mutual progress. The similarity between existing cultures is also one of the potentials that can be developed by both countries in the future. One of these potentials is cooperation between halal industry of the two countries. (Rezha/Trans/Ndy/AHM) 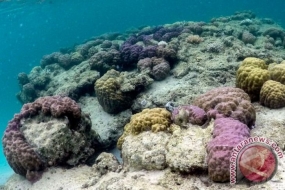 The Ministry of Foreign Affairs of Indonesia, in cooperation with related ministries and partners, organized a small island development initiative program (SIDI), including for Natuna, to explore Indonesia`s potential as a global geopark.

The program, which began in 2016, has become a reference for the cooperation of the Association of States in the Indian Ocean Circle and South China Sea workshop. It was revealed at the press conference of the Ministry of Foreign Affairs and Multilateral Policy and Development Center noted in a statement in Kuta, Bali, on Thursday.

The Ministry of Foreign Affairs has engaged a team of the Ministry of Energy and Mineral Resources, supported by experts from the University of Padjadjaran of Bandung, West Java Province, to conduct a preliminary assessment of Natuna`s potential as a geopark of the nation and to make Natuna part of the "Global Geopark Network of UNESCO" in future.

Indonesia has successfully championed several national geoparks, such as Lake Batur, Mount Sewu, Mount Rinjani, and Ciletuh, to be part of the "Global Geopark Network of UNESCO."

Currently, Indonesia is also striving for the inclusion of the geopark of Lake Toba in the world'`s geopark network.

Several sites in Natuna, including granite stones over 100 million years old, and other marine sites could become maritime geoparks. The benefits of a site being included in the UNESCO`s geopark network are the preservation of the site and the increasing number of tourist visits to it.

In addition, the cultural and historical aspects of Natuna should also be explored and preserved on an ongoing basis, for instance, poetry of the Riau Islands region, which is in the process of being proposed to be one of the world cultural heritages through the UNESCO.

The world needs to become aware of a maritime trade route known as Kayu Manis Path and Rempah routes built by the great empires of Indonesia where Natuna is one of the international ports in the golden age of the archipelago.

Efforts to make Natuna as a maritime geopark are also supported by the Provincial Government of Riau Islands and Natuna District keen on conducting exploration activities in Natuna and its waters as an integral part of Indonesian history.

According to Syamsu Bahrun, assistant for economic development of the Riau Islands Province, Natuna can follow the Hawaii model.

Hawaii is a US naval base in the Pacific Region. However, at the same time, the US Federal Government and local authorities in Hawaii have succeeded in expanding Hawaii into a global tourism hub and even a fast-growing economic center.

"This is a good example, where defense and socio-economic development of the community go together and mutually reinforce the area. Natuna can follow this pattern of development," he stated. (ANTARA)