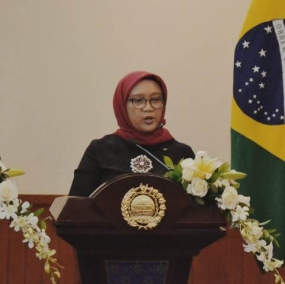 Minister of Indonesian Foreign Affairs, Retno LP Marsudi held a bilateral meeting with her Brazilian counterpart, Minister Aloysio Nunes Ferreira at Novotel Hotel in Bogor, West Java on Friday (May 11th).  In this bilateral meeting, both ministers agreed to strengthen bilateral relations by intensifying the implementation of the Strategic Partnership that has been established since 2008. 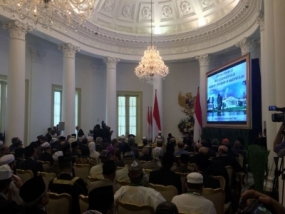 “We are holding the trilateral clerical meeting amidst the world’s concern, especially the Islamic world related to the transfer of the US embassy to Jerusalem. Indonesia strongly condemns this decision. This transfer decision violates the resolution of the UN Security Council and the UN General Assembly. Therefore, I urge the UN Security Council and the UN General Assembly to discuss the issue and take the next step. I also ask other countries not to follow the transfer of their embassies to Jerusalem. The move also disrupted the peace process and also threatened the peace itself. We with the people of Indonesia will fight with the Palestinian people and Palestine will always be in the breath of diplomacy Indonesia,” the President said. 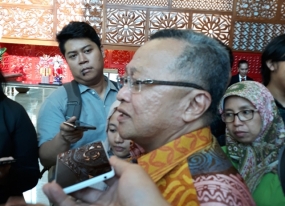 The weakening of the rupiah against the US dollar which has penetrated the level of Rp 14,000 per US dollar must be carefully monitored by the government of Indonesia and Bank Indonesia -BI. The pressure is predicted to continue and will have a negative impact on the economic sector in Indonesia. Therefore, BI has set up some second line defense options for rupiah. One of the options that can be used is the Chiang Mai Initiative Multi-lateralization (CMIM), which is a multilateral currency exchange arrangement between ASEAN + 3 members. This was stated by Head of Center for Economics and Public Policy Studies of Gadjah Mada University  (UGM), Yogyakarta, Tony Prasetiantono in a recent discussion held by a private radio in Jakarta.

“BI still has a second line defense; we have right to withdraw by three countries of East Asia, namely China plus Hongkong, Japan, and South Korea.  But, we have a question.  They are countries with a large foreign exchange reserve and Chiang Mai Initiative has been established since 2000. But, the initiative has never been activated. Because for 18 years, the ASEAN countries are fine, including in the 2008 crisis,” Tony Prasetiantono said.

However, Tony Prasetiantono also remarked that the injection of funds through the CMIM scheme to Indonesia will not necessarily have a positive impact on the Indonesian economy. He is worried that the market response will get worse after the funds totaling 240 billion US dollars are injected into Indonesia. Because, probably the market will assume that the funds are only entrusted to Indonesia in a short time. (VOI/Rezha/RHM) 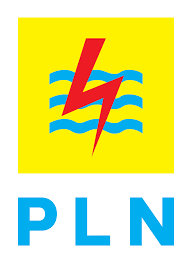 Indonesian state-owned Electricity Company, PT PLN will complete the construction of Java 2 gas steam power plant (PLTGU) immediately. The power plant is located inside the complex of PT Indonesia Power in Tanjung Priok, North Jakarta. It is planned to start its commercial operation or Commercial Operation Date (COD) on June 10th and to support the supply of electrical energy in Java and Bali, especially Jakarta. This was stated by Director of West Java Regional Business of PT PLN, Haryanto W.S to the media in Jakarta more recently.

“So, we expect on June 10th, the first unit will start the operation or COD, and then the second unit will start COD on July 20th. Those two power plants will enter the system and support the electrical system of Jakarta and Java-Bali,” Haryanto W.S said.

Haryanto further said that the power plant was built by Mitsubishi Corporation and PT Wasa Mitra Engineering. It will produce 800 megawatt (MW) energy. The energy comes from gas turbine (2 x 300 MW) and steam turbine (1 x 200 MW). The development of this power plant is under supervision of PT PLN West Java Development Main Unit and implemented by PLN Implementing Unit of West Java Power Plant Project 2. The project development contract has been effective since November 23, 2016 with a value of Rp 6.1 trillion. This project is a manifestation of a 35 thousand MW electricity infrastructure development program with a new transmission line with 46 thousand kilometers of circuits (kms). (VOI/Rezha/RHM)