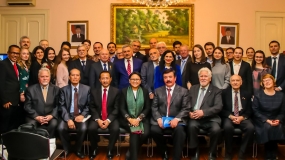 Minister of Foreign Affairs, Retno Marsudi, hoped for strengthening people-to-people contact between Indonesian and Russian communities, in a bid to intensify the cooperation between the two countries. In a press statement, received by ANTARA on Wednesday, the minister stated that during her visit to Moscow, Russia, she had expressed hoped that Russian nationals, who are rather fond of Indonesia, would continue to be friends with the country, in order to ultimately strengthen the relationship between Russia and Indonesia."The Indonesian enthusiasts acted as ambassadors for both countries," she noted.The minister met approximately 30 Russian nationals, who were keen on everything about Indonesia, at the Indonesian Embassy in Moscow. He was accompanied by Indonesian Ambassador to Russia and Belarus, M Wahid Supriyadi. These friends of Indonesia were not only elderly Russian citizens, who have known Indonesia since the 1950s, but also the young Russian generation, who can play Javanese gamelan and sing traditional folk songs. Many of them are even fluent in Indonesian.Furthermore, Marsudi admired Russians deep love for Indonesia and appreciated their contribution towards the development of the relations between the two nations. She believed that there was an immense opportunity for cooperation between Indonesia and Russia, including in the economic field. The value of bilateral trade between Indonesia and Russia, which only reached US$2.5 billion, is still considered to be too small when compared to the population of both the countries."The total population of Indonesia and Russia, which has reached 406 million, is not comparable to the current trade value between the two countries," she remarked.Chairman of the Board of Cooperation and Friendship with Indonesia (LKPI), Sergei Shakhrai, who attended the meeting, remarked that the board will continue to encourage, seek, and develop cooperation between both the countries, including in innovative fields."LKPI has coordinated friendly relations and cooperation with Indonesia and is always ready to welcome efforts to establish cooperation with the country," Shakhrai revealed.He is one of the founders of the Constitution of the Russian Federation and Vice-Chancellor of one of Russia`s leading universities, Moscow State University. Shakhrai then noted that there are a number of Russian and Indonesian cooperation, which have been pioneered and can be developed further, including in the field of law, history, and sports, especially badminton. He also believed that Indonesia and Russia could develop Islamic cooperation, including in the sectors of education and halal tourism.Marsudi was in Moscow for a bilateral visit and had organized a meeting with Russian Foreign Minister Sergey Lavrov on March 13. (antara )

Korea Interested to Invest in Transportation Sector in North Sumatra

The Korea Rail Network Authority (KRNA) stated their interest to invest in mass transportation sector in North Sumatra."Our management is ready to conduct cooperation with the North Sumatra provincial administration in building the mass transportation," the General Manager of Overseas Cooperation of Korea Rail Network Authority, Dae-Geun Park, said here on Wednesday.Park said the company interested to invest in North Sumatra as the province has potential economic resources to be developed further. He has met the executive of N Sumatra Regional Secretary, Ibnu Hutomo.

The KRNA is a Korean company that construct Light Rapid Transportation and Bus Rapid Transportation. The Korean company interest is inline with the Indonesian government`s plan that invites the private sector to invest in the transportation facility.Hutomo said the N Sumatra Administration also interested to the proposal of KRNA, particularly the construction of railway."The provincial administration wants to have a railway that connect Medan or several regions such as Pematangsiantar-Parapat, Toba Lake-Pematang Siantar-Parapat-Silangit Airport of North Tapanuli," Hutomo added.The adequate transportation facility can support to increase tourist visits to Lake Toba, he said. The provincial administration also wants to connect several cities such as Medan-Binjai-Deli Serdang-Karo. (antara) 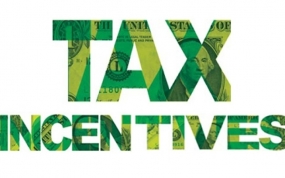 The Indonesian government will offer more interesting tax incentives than other ASEAN countries, to lure more investment inflow, Finance Minister Sri Mulyani Indrawati stated. The incentives are made to finalize all investment`s regulation in Indonesia that had been ordered by President Joko Widodo (Jokowi)."We have done a benchmarking and in terms of allowance and holiday, our offers will be much better than Thailand, Malaysia, Vietnam, and Philippines," she noted in Jakarta on Tuesday.The Finance Minister noted the incentive package will be announced by President Jokowi in April this year, in order to give global`s confidence towards economic growth, emerging market, and conducive investment`s climate in Indonesia."The government has undeniable commitment to reform investment policy. We will provide ease of doing business, simplification, service, and certainty," she said.Indrawati revealed that there would be some radical changes in the incentives` package on tax holiday and tax allowance. Indonesia will give a certainty of 100 percent tax holiday to replace existing 1 percent rate."Every qualified business that gets facility will be receiving a 100 percent tax holiday in a certain of period, which depends on its investment`s values. The bigger, the longer it will get a tax holiday," she noted.Indonesia would also offer tax allowance for pioneers category in order to expand its business capacity. This category could also choose to receive tax holiday or tax allowance."For small-medium enterprises with under Rp4.8 billion (turnover), we will cut their income tax from 1 percent to 0.5 recent," said Indrawati.The low income tax incentives would also be given to research and development investments in order to encourage product innovation. ( antara ) 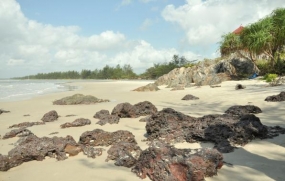 The administration of East Belitung District, Province of Bangka Belitung, has proposed a geopark in the area to be included in the UNESCO Global Geopark ( UGG ) list in order to enhance tourism development and increase the number of tourist visits.

"Hopefully in September this year East Belitung Geopark will be on the UGG list," the Head of Kelapa Kampit Sub-district Administration, Yuspian, said in East Belitung, on Wednesday.

He added that East Belitung Geopark is different from other areas in the district as it has a combination of biological, geological, and cultural aspects.

"If it is approved by UNESCO, East Belitung Geopark will be Indonesia`s third UGG," he said.

Yuspian explained that the geological sites in East Belitung are quite large, including open pits, Keran Island, mangroves, and Mount Lumut.

On its website UNESCO defines Global Geoparks are single, unified geographical areas where sites and landscapes of international geological significance are managed with a holistic concept of protection, education and sustainable development. Their bottom-up approach of combining conservation with sustainable development while engaging local communities is becoming increasingly popular.

At present, there are 127 UNESCO Global Geoparks in 35 countries, including two areas in Indonesia, namely, Batur in Bali and Gunung (Mount) Sewu in the Southern Mountains of East Java.

Batur UNESCO Global Geopark covers an area of 370.5 square kilometers. It has outer-caldera wall which surrounds the inner-caldera wall, Mt. Batur and the lake. Meanwhile, Gunung Sewu which extends east-west along 120 kilometers is a depression zone occupied by Merapi and Lawu active volcanoes. ( antara )
Read full article
Page 590 of 700
Home