The General Election Commission (KPU) has stated that the implementation of the simultaneous elections in 171 regions in the country on Wednesday had been carried out smoothly, and no disruption was reported.

KPU Chairman, Arief Budiman, stated at a press conference during the "Election Visit Program" here on Wednesday that based on his direct monitoring of several regions, implementation of the elections had been carried out smoothly, and regulations had been followed, although not perfectly.

He admitted that some problems had occurred in several places, which were small, but they had not affected the implementation of the elections.

Sharing his view, the chairman of the East Java chapter of the Election Supervisory Agency, Muhammaf Amin, remarked that based on monitoring of the fields by his staff, no report had been received on the failure of the democratic process in the region.

"There has also been no report on anyone being rejected or hindered from exercising his right," he revealed. (ANTARA) 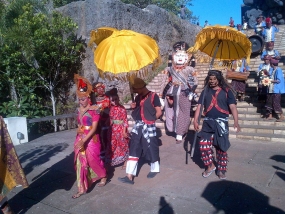 The Ministry of Tourism welcomed 254 foreign tourists from Poland, who arrived at I Gusti Ngurah Rai Airport, Denpasar, Bali, on a LOT Polish Airline charter plane on Monday (June 25).

"The group that arrived today is the first group of the total 10 groups to come to Indonesia for vacation. The total number of Polish tourists who landed in Bali on a LOT Polish Airline until October 2018 is predicted to reach 2,540 tourists," Rahayu noted in a statement in Jakarta on Wednesday.

The welcoming ceremony was also attended by Deputy Minister of Foreign Affairs of the Republic of Indonesia, A.M Fachir; Indonesian Ambassador to Poland, H.E. Peter F Gontha; as well as the Polish Ambassador to Indonesia, H. E. Beata Stoczyska.

The arrival of the foreign tourists from Poland is a form of cooperation of the direct charter flight program connecting Warsaw and Denpasar, which had been established since 2016.

Each group of Polish tourists will be on vacation in Indonesia for 14 days. It will certainly have a positive impact towards the effort to achieve the target of foreign tourists visiting Indonesia, and the Ministry of Tourism truly appreciates this form of cooperation, Agustini remarked.

According to the Minister of Tourism, Arief Yahya, a plus point of European tourists is their spending. A tourist spends an average of US$1,538 per visit.

The Ministry of Tourism earlier targeted the arrival of 17 million foreign tourists and 270 million domestic visitors in 2018.

In the meantime, the Central Bureau of Statistics (BPS) noted that the number of foreign tourist arrivals in Indonesia in 2017 had reached 14.04 million, up 21.88 percent compared to 11.52 million in 2016.

Head of BPS Suhariyanto noted at a press conference in Jakarta recently that of the 14.04 million foreign tourists, 11.79 million had entered through 19 main entry gates, and 2.25 million visited the country through the entry gates other than the 19 main entrances. Based on BPS` records, the number of foreign tourist arrivals in 2014 had reached 9.43 million and rose to 10.23 million visits in 2015, while in 2016, the country had received 14.04 million visitors.

Meanwhile, the room occupancy rate of star-rated hotels in Indonesia in December 2017 had reached an average of 59.53 points, or an increase of 3.03 percent compared to 56.50 percent in December 2016.

Similarly, as compared to the occupancy rate of star-rated hotels in December 2017, the figure increased by 1.65 points compared to November 2017.

The average length of stay of foreign and Indonesian guests in star-rated hotels in December 2017 was recorded to be 1.72 days, an increase of 0.02 points compared to December 2016. (ANTARA) 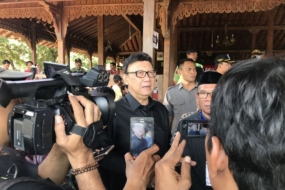 The Ministry of Home Affairs monitored the 2018 regional head elections (pilkada) in five districts and a city in North Sulawesi Province.

"Based on the reports of our team in some districts and a city, the implementation of pilkada has gone safely," he noted.

He stated that his side also conducted special monitoring in the archipelagic areas since communication network problems were encountered in the distribution of logistics.

Furthermore, the ministry expressed hope that the elections in North Sulawesi Province and other areas of Indonesia would be implemented smoothly and safely. Over 152 million Indonesians were expected to go to polls to elect 17 governors, 39 mayors, and 115 district heads for the 2018-2023 term during the simultaneous pilkada to be held in 171 regions across the country on Wednesday (June 27).

Based on the data of the General Elections Commission, the total number of eligible voters for the 2018 pilkada was 152,067,680, comprising some 76 million female and 75 million male voters.

Indonesia had organized simultaneous pilkada peacefully in 2015 and 2017 respectively. (ANTARA) 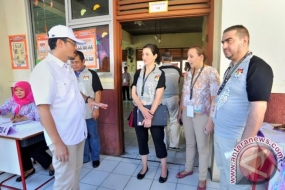 Several foreign observers from 12 countries have visited Indonesia to monitor the implementation of the ongoing regional head elections (pilkada) being held simultaneously in 171 regions across the country on Wednesday.

The foreign observers came from Australia, Switzerland, and several Asian countries, among others.

Several foreign embassies and three international election monitoring organizations have also sent their representatives to observe the third simultaneous pilkada ever organized by the Indonesian government so far.

At least 20 civil organizations of Indonesia have also sent observers to monitor the implementation of pilkada at various polling stations.

Meanwhile, some 150 foreigners from 24 countries participated in an election visit program in Surabaya, East Java, to observe the pilkada 2018.

The foreigners were from Fiji, Egypt, South Korea, the United States, and the United Kingdom, among others.

The government declared the local election day as a national holiday.

Based on data of the General Elections Commission, the total number of eligible voters for the pilkada 2018 reached 152,067,680 comprising some 76 million female voters and 75 million male voters.

The Commission estimated that the total turnout will reach more than 70 percent.

Indonesia had organized simultaneous pilkada peacefully in 2015 and 2017 respectively.

A total of 171,507 police personnel; 36,968 TNI or military forces; and 756,470 community guards were deployed to ensure security during elections.

Brigadier General Rikwanto, head of the multimedia bureau of the Indonesia Police`s Public Relations Division, said recently that security forces stood guard to ensure security in 392,226 precincts set up for the elections. (ANTARA)