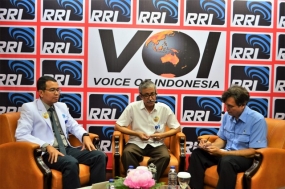 President Director of Persahabatan General Hospital, Mohammad Ali Toha, hopes that the success of Indonesian doctor team in running Megaprosthesis Reconstruction Operation in Indonesia can serve as a world model for healing patients with similar symptoms. Mohammad Ali Toha in a special interview with Voice of Indonesia in Jakarta on Wednesday (25/7) explained, a team of doctors led by dr. Sigit Daru Cahayadi has successfully performed the first limb rescue operation in the world. The surgery was done to cure 15 year-old patient who suffers from malignant bone cancer.

“This is one of our ways to show what we can do for Indonesia. It means for Indonesia that at the time there is the courage to start doing that. The Board of Directors also supports this operation, giving benefit to outside doctors to watch and see the work process. So they can also develop later someday in other places,” said Mohammad Ali Toha..

Meanwhile, Sigit Daru Cahayadi, explained that this operation involves a number of specialist doctors from the Clinicopathology conference. According to him, the specialists are from various skills, including Orthopedics, Radiology, Anatomy Pathology, Pediatric Consultant Hematology-Oncology, and Radiotherapy, in determining the course of therapy which is appropriate for patients with bone malignancy. The Indonesian doctor team at Persahabatan General Hospital, Jakarta, on Wednesday (18/7) has successfully performed surgery without amputation on Osteosarcoma or bone cancer patient. This surgery is an act of rescuing limb as well as installing artificial bone in the patient (VOI/Ndy/AHM) 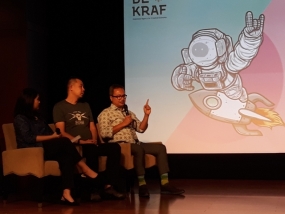 The Creative Economic Agency -Bekraf continues to collaborate and organize various programs for the advancement of creative economy industries in Indonesia. One of these programs is to present Pavilion Archipelageek featuring various innovative products of Indonesian start-ups at the South by Southwest (SXSW) largest creative and technological festival, held in Austin, Texas, US) every year. Currently, the agency is preparing to prepare Archipelageek Pavilion at SXSW 2019 on 8 to 17 March 2019 with a different touch. Deputy of Marketing of Bekraf, Joshua Pudji Mulia Simanjuntak, said in his press conference in Jakarta on Thursday (July 26, 2018) that the agency plans to introduce Dangdut music as Indonesian original music to SXSW 2019 through Hello Dangdut program. Through the program, it is expected that the visitors of the SXSW 2019 can get more familiar with Dangdut music as Indonesia's original music and feel the euphoria of Dangdut music.

“We want to listen to Dangdut music to get the same experience. Here, Dangdut is very popular and become the hits, isn’t it! We want that to happen as well. Because we can see that Dangdut is very potential to get a place in the world music genre such as Reggae from Jamaica. Surely, Reggae also entered the United States, as an unpopular music and then entered the market. Then, the musicians eventually became known by the American market and then known by the world market,”

In regard to the concept that will be brought by the program ‘Hello Dangdut’ in SXSW 2019, Joshua explained that his agency will show Dangdut music through the concept of mobile Dangdut which has been modified. The mobile Dangdut uses a wagon that carries musical equipment and loudspeakers. This is commonly found in some regions in Indonesia, including in big cities. According to Deputy of Marketing of Indonesia’s Creative Agency-Bekraf, Joshua Pudji Mulia Simanjuntak, the mobile Dangdut is an interesting and unique concept. He himself got the idea to use the concept of the mobile Dangdut of hip-hop music performances in the 1980s era that also moved from one place to another, carrying equipment in the form of a music player. (VOI/Rezha/AHM 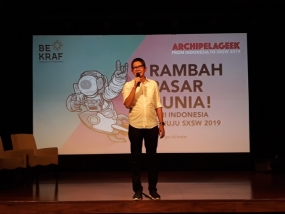 After successfully presenting Archipelageek Pavilion at South by Southwest -SXSW 2017 and 2018 held in Austin, Texas, USA,  Creative Economy Agency -Bekraf is now preparing to be present at SXSW 2019 which will be held on 8-17 March 2019. With the same preparation as previous SXSW, the agency will open registration for the start-up companies which have innovative products and ready to penetrate global market. Registration for the SXSW 2019 will be open on the agency's official website on Monday, July 30th 2018. After the press conference held in Jakarta on Thursday (July 26, 2018), Vice Chairman of Creative Economy Agency -Bekraf, Ricky Joseph Pesik said that SXSW is a very important and prestigious event for startups around the world. Thus, the agency tries to increase the participation of start-up companies in Indonesia every year.

“One of the tipping points of the creative economy sector is the international market hub. One of which, for example, is South by Southwest. We are seriously showing Indonesia. In 2016, we held a survey and then in 2017 we presented it; in 2018, we expand our presence. So, in 2019, we hope that we can present Indonesia greater. Because there are many great opportunities to showcase innovations, and breakthroughs to the world. What can be offered from Indonesia to the world is in line with Indonesia's increasing entry into the world's radar. We repeatedly see in the global media that Indonesia is projected to be one of the leading economy countries in the world,” said Ricky Joseph Pesik.

In relation to innovation products from startups, Ricky Joseph hopes more startup companies in Indonesia to participate in SXSW 2019 to penetrate their products to the global market. In SXSW 2018, Indonesian representatives consisting of five startup companies, namely: Kata.ai, Mycotech, Saft7Robotics, Seruniaudio, Squline, Digital Happiness, Minikino and Vestifarm and also supported by Telkomsel NextDev are well received by visitors from all over the world. The visitors are very enthusiastic with the products on display, giving appreciation to the offer of cooperation. Creative Economy Agency -Bekraf is still carrying the same theme in SXSW 2019, namely Archipelageek inspired by the philosophy of Indonesia as the largest archipelago country in the world. (VOI / Rezha/AHM) 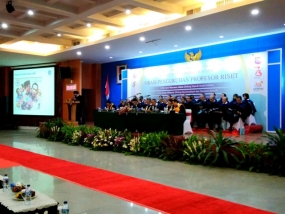 An Economic Research Professor of the Indonesian Institue of Sciences (LIPI),    Sarip Hidayat at the Inauguration of Research Professor at Indonesian Institute of Sciences (LIPI) Auditorium Jakarta on Thursday  (26/07) said the Regulation of number 22 Year 1999 on Regional Government has given authority for the regional government to organize resources by looking at the potential and regional diversity. Regional Autonomy  is expected to provide holistic authority and responsibility for development and equity. However, he said it needs conceptual reformation so that the policy can answer the existing challenges.

“Conceptual reformation and decentralization policy and Regional Autonomy is pragmatic-parcialistic and it is built based on a series of events. It is assumed that it is difficult to answer the national problems.  The solution of both concepts and decentralization policy and the right Regional Autonomy  is for the sake of the nation and it is not for the government. It is holistic and must be built based on a series of event,” Sarip Hidayat said.