Chairman of the Organizing Committee of Asian Games Indonesia - Inasgoc, Erick Thohir in Jakarta on Friday reported to the Chief of the Asian Games Steering Committee, who is also concurrently Vice President of Indonesia, Jusuf Kalla on various preparations that have already been carried out ahead of the 2018 Asian Games. The preparations include the athletes, the venue as well as a number of supporting facilities. To the press, Erick Tohir said that the whole preparations have run well. The cooperation with the regional governments has also taken place well.

“The regional governments give full support. For example, the Torch Relay where the regional leaders are really very helpful with the activity. Because, we as the organizing committee of the Asian Games cannot be successful if we are not united,” Erick Tohor said.

Erick Tohir further said that the timely arrangement of mobility of Asian Games athletes has been attempted through traffic engineering, the application of odd-and-even vehicle numbers and temporary holidays for school children in Jakarta. (KBRN/Rizki/RHM) 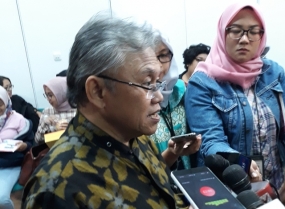 The Importance of Limiting Gadgets Use to children

The phenomenon of gadget addiction or gameplay among children is one of the concerns at the National Children's Day Celebration in 2018. Though the use of the devices potentially dangerous to children's growth. This was conveyed by Professor of the Faculty of Medicine University of Indonesia (UI) Soedjatmiko to the reporters at Indonesian Ministry of Health Jakarta, on Tuesday (24/7/2018). According to Soedjatmiko, the device can be a tool that directs children to negative things, such as negative information like pornography and hoaxes, violent content that is inconsistent with their age, commercial information or advertising that can harm children and their parents, and the last is a game that often makes them addicted. He said the addiction of children to gadget is influenced by many things, including the influence of their own parents.

“Regarding the addiction to the gadget, that  is influenced by many things. First, an example from a parent, from the environment, from a friend.Second, the lack of control of parents, restrictions, and also less control of the environment, for example from school. Third is no solution he played what. Play what is more fun or just as fun as a gadget. Those three things can cause children addicted to gadgets,” said Soedjatmiko.

Furthermore, Soedjatmiko explained that parents have a very big role related to the effect of the device on children. Parents are expected not only to forbid their children from using the devices alone, they are also expected to reduce the use of the devices in the presence of their children. In addition, parents are also expected to increase the interaction directly with children through various activities that can stimulate child growth. Soedjatmiko said, related to the addiction of children's devices, the current awareness of the negative effects of the device has begun to increase among educators and parents. Gawai is now a prohibited item in a number of schools in Indonesia. Indonesian Ministry of Women Empowerment and Child Protection is currently doing a joint study with Indonesian Ministry of Communications and Information Technology to prohibit the use of devices in children. (VOI / Rezha/AHM) 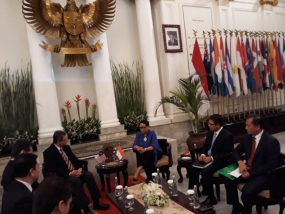 Indonesia and Malaysia has agreed to accelerate negotiation on boundary issue between the two countries. The negotiation which is conducted by the two countries, is hoped to be able to produce an agreement, namely Border Crossing Agreement (BCA) within two months. Because border trade will not begin if the BCA is not resolved. This was stated by Indonesian Foreign Affairs Minister, Retno Marsudi in a joint press statement with Malaysian Foreign Affairs Minister, Saifuddin Abdullah at Gedung Pancasila, in Jakarta, on Monday (23/7).

Furthermore, Minister Retno Marsudi explained for border point at sea area, Malacca Straits and Sulawesi Sea will become the priority to be negotiated in a short time. After the two points of the border are agreed and formalized,the negotiation will be continued to other border points. In addition, the two countries also have given full mandate to the technical team and from the stakeholders related to the border of the two countries. The team will report to the Ministry of Foreign Affairs which later determines the thing which should be finished. Malaysia is neighboring country with the longest border area with Indonesia, both land and maritime border. (VOI/REZHA/Trans Yati/AHM) 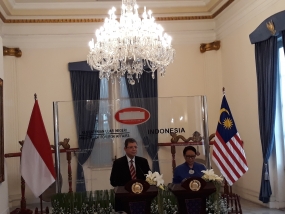 "For the palm oil, the trialog process has been done but we still need to continue cooperating for the post-trialog. I said that I have sent the letter to Ministry of Foreign Affairs of the European Union and he said that he would send his letter to respond this trialog process. Therefore, he also conveys to the President that Indonesia and Malaysia do not have other choice besides cooperating firmly to respond the negative campaign of the palm oil," said Retno Marsudi.

Formerly, Malaysian Prime Minister, Mahathir Mohammad said to President of Indonesia, Joko Widodo, that Malaysia and Indonesia needed to cooperate to fight for the palm oil because the European accusation that the production has damaged the environment was not true. Prime Minister Mahathir Mohamad believes that the reason why Europe commits the negative campaign towards the palm oil from Indonesia and Malaysia  tends to business motive only. However, all the reason that is conveyed is always about the problem of environment which has been contradicted by various researches done by Indonesia and Malaysia. Related to the environment issue and the palm oil, Indonesia is one of the members of Roundtable on Sustainable Palm Oil (RSPO) that is formed in 2004. RSPO contributes to inform the eternal palm oil and cercitication system of the palm oil. Indonesia is committed to European Union through the European sustainable palm oil project in 2015. The project was held to help increasing the obedience towards certification standard which is suitable with RSPO definition (VOI/Rezha/AHM)