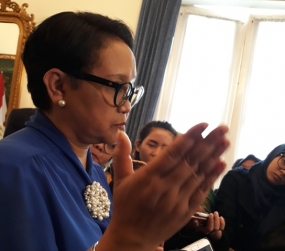 Israel has formally passed the Jewish Nation-State Law which is perceived to further marginalize the Palestinians in the country. The ratification of the law, according to Indonesian Minister of Foreign Affairs, Retno Marsudi, in addition to denying the rights of the Palestinians, it will also threaten efforts to resolve the conflict based on the two state solutions. This was stated by Indonesian Minister of Foreign Affairs in a joint press statement with Malaysian Foreign Affairs Minister, Saifuddin Abdullah in Jakarta, Monday (23/7).

“I want to convey one thing, namely on the legalized Jewish Nation-State Law on July 19 by Israel parliament. The legalization of the law has denied the rights of the Palestinians in Israel and threaten the conflict solution based on the two state solutions”she said.

The Israeli Parliament, the Knesset has passed a new law defining the Israel as the country of the Jewish. The law is controversial as it is increasingly marginalizing the Palestinians or ethnic Arabs who have long complained of being treated as the second class citizens. As a result of the enactment of the law, the Palestinians will lose five rights, including the right to acquire and lease land, the right to return, the right to stay, the right to have a family, and the right to commemorate the Birthday of the State of Israel as a day of mourning or Nakba Day. (VOI/Rezha/Trans-Yati/AHM) 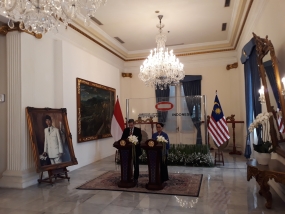 Indonesian Minister of Foreign Affairs, Retno Marsudi conducted a bilateral meeting with Malaysian Foreign Affairs Minister, Saifuddin Abdullah at Gedung Pancasila, Ministry of Foreign Affairs in Jakarta, on Monday (23/7). On the occasion, the government ofMalaysia directly declared its preparedness to assist educational access to the children of Indonesian migrant workers in Malaysia. According to Minister Saifuddin Abdullah in a press conference along with minister Retno Marsudi, Malaysian government will facilitate  development of Indonesia’s school in Sabah to complete Indonesia’s school in Kuala Lumpur and Johor which have been built before.

“We conveyed that Malaysian kingdom is ready to facilitate the requirement of building Indonesia’s school which has existed in Kuala Lumpur andin Johor. But Indonesia’s request is school in Sabah. So, we will facilitate it” he said. 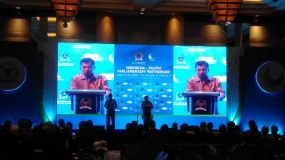 Indonesian Vice president, Jusuf Kalla attended Indonesia-Pacific Parliamentary Partnership in Jakarta, on Monday (23/7). The event which was held by the House of Representatives was attended by 13 delegations from 14 countries in Pacific region. The meeting has a theme "Human Development and Maritime Sustainability" which focuses on encouraging human resources and sustainable development of maritime country in the Pacific. In his speech, Vice President Jusuf Kalla encouraged the increasing of multilateral connectivity in blue economy because Pacific countries are maritime countries in Pacific Ocean.

“Blue Growth concept is a concept where we have three things which should be noticed, namely the income which is obtained from the maritime activity. Secondly, conservation and protection of marine ecosystem. And social culture, characteristic community which connect all of us. Basically, we have social cultural relations” he stated.

Meanwhile, chairman of the House of Representatives, Bambang Soesatyo as the host also expressed his gratitude for the participation of Pacific countries in improving multilateral cooperation in maritime. Bambang also said that Indonesia as a maritime country with the most and widest islands has a potential as a great country as it is the fourth most influential country in the world. Indonesia also contributes in various forum and events of world maritime cooperation.  Countries participating in Indonesia-Pacific Parliamentary Partnership were Micronesia, Fiji, Kiribati, Nauru, Palau, Papua New Guinea, Marshall Island, Solomon Island, Tonga, Tuvalu, Polynesia dan New Caledonia. (KBRN/RIZKI/TRANS YATI/AHM) 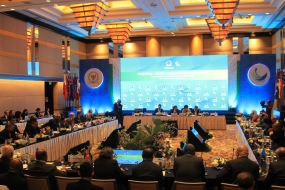 “As we aware the objective of this meeting is to promote better linkage, therefore we must embrace topics that are of the interest of our mandate as a representative of our people. After carried considerations, the committee under my leadership has decided on three topics under the umbrella of primary theme: Human Development and Marine Sustainability” she stated.

Nurhayati further explained that the session discussed on development of natural and Human resources in Pacific region, blue economic issue and development of capacity. The discussion focused on the context of parliament's involvement and mandate to deeply follow up on those issues. Through the event, the House of Representativessupported the implementation of Indonesia’s foreign politic which based on principle of free active and pro-active in creating world which is safe, prosperous and fair. The opening of Indonesia-Pacific Parliamentary Partnership was also attended by vice president Jusuf Kalla, chairman of the House of Representatives, Bambang Soesatyo and vice of foreign affairs minister, AM Fachir.//TRANS-YATI// (voi/sekar)