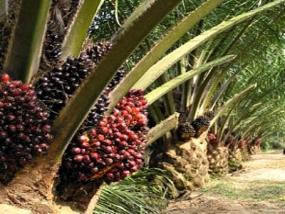 Indonesia needs to expand the market for its crude palm oil (CPO) at home and abroad and resolve the problems being faced by palm oil industry in the production of the commodity. While facing a threat due to the European Union`s plan to phase out its palm oil-based biofuel, Indonesia has to seek new markets, while maintaining its conventional markets overseas, such as India, China, and Pakistan, which are the largest markets for Indonesian CPO.

Thus, the Indonesian and Australian governments have held negotiations on CPO trade. "We are currently carrying out the process with Australia, and we have agreed to come out with the final agreement this August," Trade Minister Enggartiasto Lukita stated in Jakarta on Monday (April 9).

The Minister of Trade continued to communicate intensively with the Australian parliament regarding the drafting of policies on the use of oil palm and its derivative products in Australia.

"There are still some things that are under negotiations..Along with member of the Australian parliament, Steven Ciobo, we have agreed that the next round of negotiation processes between the set teams will take place soon. They will leave out some items, and later, the two ministers will take the final steps," he explained.

The Indonesian government also needs to consider selling CPO to Mexico in an effort to boost cooperation between the two countries. "We should consider selling CPO, because we have a lot of CPO production," Chairman of the Indonesia-Mexico Bilateral Cooperation Group (GKSB) of the House of Representatives (DPR), Djoko Udjianto, stated in a release in Jakarta on Tuesday (April 10). Udjianto noted that although Mexico is supported by sunflower oil and soybean commodities from the US, CPO can still become one of its alternative imports.

Apart from that, the Indonesian government has also looked at Ghana. The governments of the two countries have agreed to cooperate to fight the negative campaign against the palm oil commodity.

"I have met the vice minister of agriculture and food of Ghana. We discussed about several negative campaigns against palm oil. Palm oil-producing countries should unite against these negative campaigns," Minister of Foreign Affairs Retno Marsudi had noted in Bali last week (April 11).

While intensifying the efforts to expand its market abroad, Indonesia, as the world?s largest CPO producer should, therefore, continue to improve production at home. It is admittedly true that Indonesia`s CPO industry still faces three main problems.

"If these issues are not solved soon, the impact will reduce the competitiveness of Indonesia`s palm oil," Gapki Chairman, Joko Supriyono, noted during the inauguration of the executive and supervisory board members of the Gapki for the 2018-2023 period in Jakarta on Saturday (April 21).

To this end, Supriyono, Chairman of Gapki for the 2013-2018 period, stated that the association must partner with the government, especially for formulating policies or regulations that will not harm the domestic oil industry.

"This issue was also raised by President Joko Widodo (Jokowi), who has carried out extensive deregulation, but investment is still slow," he pointed out.

Jokowi suggested that the industry needs a regulation that creates a conducive climate to tackle issues related to government policies of both the central government and the local government. According to Jokowi, the policy or regulation is not only from within the country but also from the government of Indonesia`s palm oil export destination, such as India, which applies increased import tariff, or the United States, which always imposes tariff and non-tariff barriers on imported products.

Regarding productivity problem, Supriyono remarked that Indonesia`s productivity of palm oil plantations is still below other producing countries, such as Malaysia, Colombia, and Thailand, although Indonesia is the world`s largest producer of the commodity. Meanwhile, the production cost of palm oil plantations in Indonesia is also high, surpassing those of other producer countries.

"In fact, the best palm oil companies in Indonesia are still inferior to the worst firms in Malaysia in terms of production costs," he pointed out.

The Gapki chairman admitted that security and social costs remain contributors of high production costs in Indonesia and are difficult to be avoided by the company. He noted that the current global demand for vegetable oils, including palm oil, continues to grow on an average of five million tons per year.

According to Gapki, the performance of the national palm oil industry is virtually very good throughout 2017. This is evident from the significant increase in production. "In 2017, the performance of palm oil industry was very good and production increased significantly," Secretary General of Gapki, Togar Sitanggang, revealed in a press conference at Gapki Head Office on Tuesday (Jan 30).

In 2016, Indonesia`s palm oil production reached 35.57 million tons. "The stock remained the same from the beginning of the year and slightly increased at the end of the year," Sitanggang was quoted by Kompas.com as saying.

Previous data have indicated that Indonesia is estimated to have 11.6 million hectares of palm oil plantation. Of the total, some eight percent are managed by state companies, 49 percent by private CPO industries, and 43 percent belong to small farmers. The livelihood of about 16-20 million people depends on upstream and downstream palm oil businesses across Indonesia. In 2016, Indonesia produced over 35.57 million tons of crude palm oil, and 25 million tons were exported worldwide, mainly to India, China, Pakistan, and the Netherlands, bringing in US$17.8 billion in revenue, or about an eighth of the country`s total export proceeds. ( antara )

The Association of Southeast Asian Nations (ASEAN) members` senior officials discussed the vision for strategic partnership between China and ASEAN towards 2030 during the Senior Officials Meeting (SOM), Singapore, Thursday, before the 32nd ASEAN Summit. Permanent Representative of the Republic of Indonesia to the ASEAN Ade Padmo Sarwono remarked that the discussion still covered the general scope, as a preparation among the 10 ASEAN member countries to be proposed to the ASEAN Summit and ASEAN-related Summit in Singapore in November 2018.

"This ASEAN-China strategic vision discussion is part of the preparations ahead of the event in November. During the discussion, the ASEAN covered the outcome and the ways to negotiate with China to be proposed in the upcoming event," he noted.

The outcome of the negotiations between both sides is expected to be presented by the leaders of ASEAN and China at the 21st ASEAN-China Summit in Singapore in November 2018 as well as to mark the 15th anniversary of the ASEAN-China Strategic Partnership.

"Currently, our partnership level with China is strategic. The 2030 vision will serve as a beacon to further enhance ASEAN-China relations in various fields," he stated.

The 2030 vision, in principle, will cover the three pillars of ASEAN: politics, law, security; economy; and sociocultural. For the political pillar, he explained that one of the main agendas was to accelerate the completion of the Code of Conduct (COC) in the South China Sea as well as to improve countermeasures against terrorism and transnational crime. For the economic pillar, the ASEAN is keen to increase investment and trade with China as an economic community. In the sociocultural field, the ASEAN is looking to enhance people-to-people contacts, especially among academic.

"The discussion is not yet complete, but the three pillars of ASEAN must be included in the negotiation process," he emphasized.

Discussion of the vision of the 2030 ASEAN-China Strategic Partnership at the ASEAN SOM level is a follow-up of the agreement between the countries` leaders at the ASEAN-China Summit in Manila, the Philippines, in November 2017. During the meeting, ASEAN and China have agreed to improve cooperation that has been going well. Currently, China is ASEAN`s biggest trading partner, while the bloc is the former`s third-largest partner. The two sides have also agreed to work together to achieve the trade target of US$1 trillion and investment of $500 billion by 2020.

The SOM of ASEAN is to be held in Singapore, the chair of the 2018 ASEAN. SOM is the initial meeting before the Ministerial Meeting and the 32nd ASEAN Summit to be also attended by Indonesian President Joko Widodo. ( antara ) 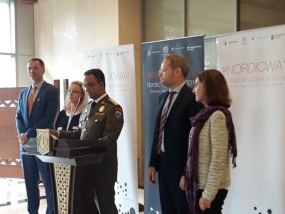 Nordic countries which consist of Denmark, Finland, and Sweden specifically held a Road show themed  ‘Nordic Way’ in Jakarta on Thursday, April 26th. The road show is specifically held to discuss solutions of complex problems in Jakarta such as garbage, traffic congestion, poverty, and people's welfare. Nordic countries are known as pioneers of sustainable urban, environmentally friendly, and livable developments. In his press conference, Governor of Jakarta, Anies Baswedan said that the adaptation of Nordic countries' way of managing urban areas is the right one to solve the existing problems in Jakarta nowadays.

“We want the discussion talking about the problem in Jakarta instead of talking about applications, solutions, in the Nordic countries for Jakarta. So, I said earlier, in English there are adopt and adapt, which we want to do is adapt. With adapting, we will see the problems of Jakarta, which need solutions and search what the solutions are. We learn from what has been done. So, instead of applying, we also solve the problems in Jakarta,” Anies Baswedan said. 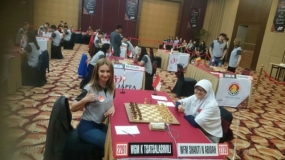 A total of 24 chess players from 11 countries have been taking part in the international chess championship – JAFPA GM & WGM Chess Tournament 2018 at Paragon Hotel Solo, Central Java since Wednesday (25/4/2018). Twelve of them are from Indonesia, while others come from various countries, including the United States, Russia, China, Vietnam, France, Serbia, Singapore, Romania and Georgia. The International Chess Championships was officially opened by Central java Governor, Heru Sujatmoko accompanied by Solo Mayor, FX Hadi Rudiyatmo and Chairman of Indonesian Chess Association (PB Percasi), Utut Adiyanto and Corporate Affairs Director of JAPFA, Rachmat Indrajaya. The General Chairman of PB Percasi, Utut Adiyanto said that the event which takes place until May 1 is aimed to encourage Indonesian chess players to improve their performance and win the grand master title. Solo is chosen as the host city as it is the home of Indonesian Grand Master, Edi Handoko. Utut hopes that the event will be able to raise the spirit of chess players as well as to establish young master seeds.

“This is a Grand Master tournament for men and women from 11 countries. There are from the United States, China, Russia, Vietnam, and France. Solo is chosen as the host city as it has been home to early chess players. There was Edi Handoko from Solo. We are lack of chess player supply from Central Java. Thus, we choose Solo to host the tournament,”  Utut Adianto said.