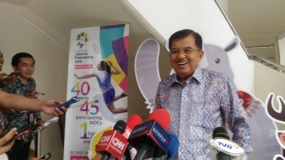 Vice President JK: Article of Insult on President May be Criticized

“Respect the President, Vice President makes something wrong….yes; if someone criticizes correctly, there is no problem. But if he or she is insulting and so forth, yes, everywhere the country has such a rule. Apologizing is the same,” Jusuf Kalla said.

Vice President Jusuf Kalla further remarked that revision of the Criminal Law which mentions an insult article to the president is reasonable. (KBRN/Rizki S/Trans by Rhm)

Indonesia will continue to strengthen the external balance (balance of payments) by stimulating export activity through increased economic competitiveness and productivity."The government will also improve the investment climate and the ease-of-doing business ranking, while accelerating and deepening structural reforms in the real sector to underpin sound and sustainable economic growth," said the Coordinating Minister for Economic Affairs, Darmin Nasution, in a statement in Jakarta on Wednesday.With solid economic fundamentals, Indonesia had a promising domestic economic outlook in the medium term. The main sources of growth were exports and investment. Exports were also key to reducing the structural current account deficit. Structural reforms would be achieved by improving infrastructure, licensing, customs and others.The investment climate would be enhanced by accelerating the business licensing process at the ministerial and local government levels through implementation of Online Single Submission (OSS). In addition, the government would offer investment incentives in the form of tax holidays, tax allowances and super deductions to replace the cost of education and vocational training as well as the cost of R&D development in order to draw investment to the downstream and upstream industries, the minister said. Through the Ministry of Finance, the Government had issued regulations to provide 100 per cent tax holidays to pioneering industries. These structural reforms would catalyse investment and stimulate exports to foster national economic growth in the medium term, the minister said.Bank Indonesia earlier said it would increase supervision and mitigate capital outflow that could reduce the rupiah value ahead of the Federal Open Market Committee (FOMC) meeting on June 14 this year. The central Bank would determine a policy to stabilise the financial market including control of the rupiah exchange rate and steps to forestall the pressure throughout 2018 at a meeting of its Board of Governors on May 30, the new Governor of the central bank, Perry Warjiyo, told reporters in Jakarta on Monday.The additional meeting of the Board of Governors of Bank Indonesia was being held ahead of the meeting of FOMC or only two weeks after the Indonesian central cank raised its benchmark interest rate by 25 basis points to 4.5 per cent on May 17. Global financial market players expected The Federal Reserve would raise its Fund Rate 3-4 times this year, including the second time in June, said Perry. Perry said the pressure of foreign capital outflows that would weaken the rupiah would still shadow the domestic financial market. The pressure of capital outflow would also come with the improvement of the U.S. economic data and from the expansive U.S. fiscal policy, which raised the yield of the U.S. 10-year treasury bill.Perry, who took over as Governor of Bank Indonesia only on May 24, has repeatedly pledged to adopt a preemptive policy and to remain ahead of the curve. "Our short term focus through the monetary policy is to stabilise the exchange rate," he said. (antara) 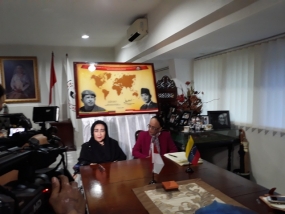 The Sukarno Education Foundation and Bung Karno University have signed a memorandum of understanding (MoU) on education and research with the Embassy of the Bolivarian Republic of Venezuela. Through the memorandum of understanding, it is expected that Venezuela and Indonesia will be able to strengthen relations in various fields including in politics, social, and foreign policy. This was stated by the Ambassador of the Bolivarian Republic of Venezuela to Indonesia Gladys Urbaneja Duran at Bung Karno University Campus, in Jakarta on Monday, May 28th.

“We are signing two agreement, MoU with the University of Bung Karno, with this foundation of University Bung Karno, just to strength a relationship in all issue of education, not only my embassy, representative my embassy, but also from my country we have different possibility to connect this university with university or institution in my country. In technical, social issue, political issue, foreign policy issue I think we can strength our relationship,” Gladys Urbaneja Duran said.

Ambassador Gladys Urbaneja Duran added that the cooperation is a testament to the close ties between Venezuela and Indonesia. This cooperation is the first time done by both parties. Prior to the signing of the MoU, the Chairman of Soekarno Education Foundation RachmawatiSoekarnoputri who is also the daughter of Indonesia’s first President Soekarno also sent a congratulatory letter to Nicolas Maduro who re-elected as President of the Bolivarian Republic of Venezuela. The letter is directly entrusted to Ambassador Gladys Urbaneja Duran and read out in front of the meeting participants. In addition to congratulating Maduro who was re-elected president of Venezuela, Rachma also congratulated all Venezuelans for what she called the highest achievers in determining the social and political landscape, as well as a better future for Venezuela. (VOI/Rezha/DP) 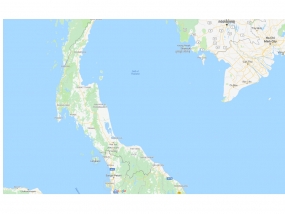 Students from the south of Thailand choose Indonesia as the favorite country to study after Egypt."Indonesia is the second country selected by South Thai students to study after Egypt. Those who study in Indonesia are mostly at Muhammadiyah University (PTM)," said the Secretary-General of the Southern Border Provinces Administrative Centre (SBPAC) of Thailand, Suphanat Sirunthawinati, according to a statement in Jakarta ( 30 May )  on Wednesday.Suphanat was speaking while receiving PTM delegates led by Prof. Edy Suandi Hamid at the SBPAC headquarters in Yala, Thailand. The PTM delegation included Endang Zakaria, Ida Puspita, Yordan Gunawan and Purnama."PTM graduates who are returning to Thailand have been working in government and the private sector here and we are glad they are studying in Indonesia," he stated.Prof. Edy Suandi said: "We will renew the existing memorandum of understanding to increase the opportunity for South Thailand students to study at PTM and we will also provide scholarships to study at PTM, which we are currently offering at PTM 16. The number of students will also increase."During the PTM team's visit, 99 prospective students will be selected through the SBPAC. And 90 will be selected from among those who apply through the Muslim Education Development Association of Thailand (MEDAT) in Songkhla and Bangkok. Suandi said the number of PTM institutions with good accredition spread across Indonesia was a special attraction for students from Thailand. "Not only from Southern Thailand, but also from other regions the selection will be held tomorrow in Bangkok city," he added. ( antara )