"The presence of MRT is expected to be one of the solutions to deal with traffic congestion in line with a change in the lifestyle of residents who would change from private cars to public transportation system in addition to improving air quality," he said.

He further said until the end of February civil and architectural construction of the first phase of the project had reached 91.86 percent while two sets of MRT engines are expected to arrive in Jakarta on March 26. (antara) 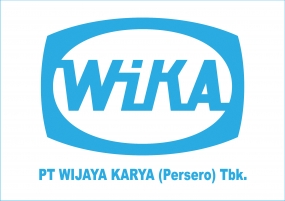 State-owned construction firm PT Wijaya Karya Persero Tbk (Wika) is ready to expand its business to build infrastructure in Afghanistan."In addition to enhancement of bilateral ties between Indonesia and Afghanistan, the firm would benefit from the infrastructure construction project in Afghanistan," Wika`s President Director Bintang Perbowo said in a statement in Jakarta on Tuesday.A business delegation from Afghanistan visited Wika on Monday (March 12), led by the Director General of First Political Division of Afghanistan Foreign Affairs Ministry Musa Arefi. The delegation was accompanied by Indonesian Ambassador to Afghanistan Arief Rachman MD.

At the meeting, Wika and Afghanistan construction firm Haji Khalil Construction Ltd signed a Memorandum of Understanding on infrastructure projects in Afghanistan. The agreement was signed by Wika`s General Manager for Foreign Affairs Yulianto and President Director of the Afghan firm Khalil Samar Gul.Perbowo stated that the meeting has opened the opportunity for Wika to participate in the development in Afghanistan.Wika, he continued, has recorded profit from its foreign construction projects. It has handled some infrastructure projects in Aljier, Dubai (United Arab Emirates), Jeddah (Arab Saudi), Myanmar, Brunei Darussalam, and Timor Leste. The company has learned some potential projects, especially in infrastructure and housing, which would be funded by the Afghan government.Meanwhile, Director General of First Political Division of Afghanistan Foreign Affairs Ministry Musa Arefi revealed that the meeting has become a momentum for both companies to know each other. "Wika has the capacity and experience; thus, it could participate in the development of infrastructure in Afghanistan," Musa explained.In January, President Joko Widodo visited Afghanistan to enhance bilateral cooperation, despite the unfavorable security condition in the country. After this visit, in February, Vice President Jusuf Kalla visited the country on a peace mission. ( antara ) 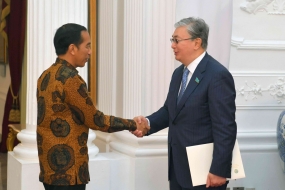 President Joko Widodo received a visit of honor groups of Kazakhstan Parliament Senate, on Tuesday at Istana Merdeka, Jakarta. The group led by the Chairman of the Senate of the Parliament of Kazakhstan Kassym-Jomart. At the meeting, the President said that Indonesia and Kazakhstan is a country with a majority muslim population.  Joko Widodo expects Indonesia's friendship with Kazakhstan voicing peaceful and tolerant Islam.

President Joko Widodo also lamented the conflict that occurred in some muslim countries and the number of refugees who came from muslim countries . The President said: “this is our responsibility, particularly as muslim countries, to maintain peace and prosperity. This is where Indonesia and Kazakhstan can cooperate, to strengthen cooperation in the field of humanitarian”

Indonesia and Kazakhstan this year to commemorate the diplomatic relations that have taken place between the two since 25 years ago. This momentum into a good start in strengthening the relations of the two countries

President and Chairman of the Senate  agreed to realize the good relations of the two countries during this time in the form of concrete bilateral cooperation particularly in the economic field. In addition, the President of would like Kazakhstan to support the candidacy of hope Indonesia as members of the UN Security Council  Non Permanent Member for period 2019-2020. He said : the contributions and efforts of Indonesia in keeping peace God willing will be the modality of Indonesia to contribute more if Indonesia sit as members of the UN Security Council ( sekkab ) 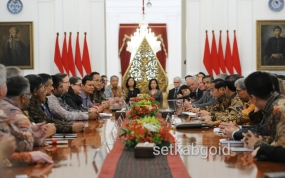 The US-ASEAN Business Council and President Joko Widodo discussed several opportunities to increase US investment in the Southeast Asian region, including Indonesia."Our mission is to facilitate the United States to increase investment in Southeast Asia, mainly Indonesia," the council`s president, Alexander C. Feldman, stated after attending the meeting at the Merdeka Palace in Jakarta, Tuesday. The council will continue to seek available investment opportunities from the United States in Indonesia, Feldman noted.Following the discussion, Feldman lauded the efforts of the Indonesian government, whose ease of doing business ranking issued by the World Bank and other rating agencies, had improved. The chief also pointed out that the local regulation and limited information are still posing a challenge for investors. However, Feldman admitted that the regulations were formulated to protect the interests of local businessmen in Indonesia.Meanwhile, Trade Minister Enggartiasto Lukita remarked that some strategies to attract more investors to the country were also discussed during the meeting. "Our discussions were fruitful. They (the council) have expressed commitment to continue working with the (Indonesian) government," Lukita noted.The minister stated that the president had shared some updates on Indonesia`s economic reforms and deregulation programs to boost investment.Lukita emphasized that the council had confirmed that the US investors harbored a positive view of Indonesia.The US-ASEAN Business Council will organize a three-day, 13-15 March, meeting that will bring together some 41 US companies and stakeholders in Indonesia. During the event the organizer will facilitate a bilateral meeting between the Indonesian government and some leaders of foreign companies. The two parties will share some updates on the country`s economy as well as opportunities to establish partnership in trade and investment. (antara )