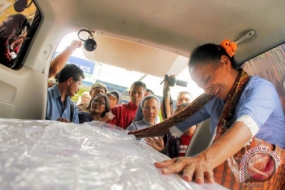 Foreign Ministry Hands Over Adelina's Body to Her family

The Indonesian government through the Indonesian Ministry of Foreign Affairs handed over the body of Adelina Jemira Sau,an Indonesian citizen from Esat Nusa Tenggara (NTT) Province who died on February 11 in Penang, Malaysia, allegedly due to violence by her employer, to her family in East Nusa Tenggara on Saturday. A press release from the Ministry of Foreign Affairs, Saturday, stated that the handover of Adelina's body in her hometown in Abi Village, South Central Timorwas witnessed by a number of South Timor Government officials, NGOs and the media. The corpse was received by the family in a customary ceremony. Tody Baskoro, of the Foreign Ministry said that the handover of Adelina's body and compensation from the sending agent would not stop the efforts of the Foreign Ministry and the Consulate to fight for justice for Adelina. He stated that foreign ministry will be guarding the legal process until justice is obtained. Currently Penang Island police have arrested three Malaysians, two brothers and their biological mother, who aresuspected of being the perpetrators of violence that led to the death of Adelina. Meanwhile Adelina's "post mortem" result has been released. (ant.18.2'18Sg/Alika/ART) 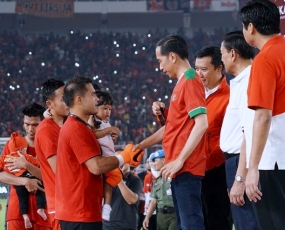 Persija Winner of The President Cup 2018

In the final match witnessed by 70,255 spectators, Persija Jakarta's three goals were created by Marko Simic in the 20th minute and in the first half of injury time, which was 47 minutes. One other goal was scored by Novri Setiawan in the 62nd minute.

With the victory, Persija was the first winner to get cash prize of Rp3.3 billion. Bali United as the second winner received Rp2.2 billion and Sriwijaya FC got Rp1.1 billion after beating PSMS Medan with a score of 4-0 in third place.

In addition to the President's Cup champions, on the same occasion a number of awards were also presented as a form of appreciation during the President Cup tournament. They were for Best Supporters, Best Referees, Top Scorers, Best Young Players of Fairplay Team, and Best Player. (Ndy/( biro pers )

Indonesia and the US Trading Potency is still Widely Open

The trading policy issued by the President of the United State of America. Donald Trump drew the attention because it carries “America First’ agenda which is considered to be a protectionist policy. In addition, the policy is also considered to be detrimental to many countries that have made the United States as the export destination country. Nevertheless, the Indonesian Ambassador to the United States in Washington DC, Budi Bowoleksono believes that the trade potential in the US is still widely open, He said, the potential was still wide open as Indonesia is also an important market for the US trading, especially related to information technology products

“But we believe that trading potency of both countries is still widely open. Besides, Indonesia is an important market for America, especially information technology products because Indonesia has 262 million populations. American market is also very important for Indonesia. Indonesia exports many products such as fishery products, footwear, and chemical products,” Budi Bowoleksono told media at the Foreign Ministry, Jakarta, recently.

Budi Bowoleksono added that currently the United States is focusing on trading policy on surplus and deficit issues. The country is introducing a new concept in trading called fair and reciprocal trade which is different from the previous concept, fair trade. Fair and reciprocal trade is a trade concept that promotes justice and reciprocity with a primary focus on surplus and deficit. This concept has a broad meaning, not just about competitive trade like the concept of fair trade but also mutual beneficial trade. (VOI/Rezha/ALIKA /AHM) 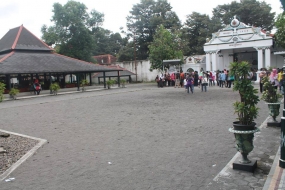