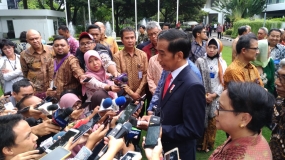 Indonesian President Joko Widodo highlighted the importance of diplomats to pay attention to Indonesia's economic diplomacy efforts. This was conveyed when opening the Work Meeting of the Head of Representative of Indonesia at Gedung Pancasila, Ministry of Foreign Affairs, in Jakarta. In his speech the President said diplomats should be able to develop Indonesia's exports to non-traditional markets rather than relying solely on traditional markets. Related to that, the President stressed the importance of conducting market research efforts or market intellegence to find the appropriate products needed by friendly countries. In addition, in the investment sector, the President also highlighted the importance of increasing investment from friendly countries to Indonesia and vice versa. The President also hopes that diplomats can start promoting Indonesia Expo to be held in October. He wants diplomats to attract as many investors as possible through Indonesia's biggest exhibition.

Indonesia remained unbeaten in the men’s team category as it retained the Badminton Asia Team Championship title after thrashing China 3-1 on Sunday, February 11th. Meanwhile, the Indonesian women’s team were halted in the Saturday semifinals after being beaten 3-0 by Japan. The championship in Malaysia acts as a qualifier for the upcoming world Thomas Cup men’s team and Uber Cup women’s team competitions, which will be held in Bangkok in May. It means that Indonesia has secured both spots in the cup.  Facing archrival China in Sunday's battle, Indonesia’s second-best men’s singles player, Jonatan Christie, played well as he nailed the important winning point as a starter. Jonatan, being world number 13, outshined world number seven Shi Yuqi 21-16, 17-21, 18-21 in the 1 hour and 11 minutes battle. Another winning point came from men’s doubles pair Mohammad Ahsan and Angga Pratama. In appreciation of Jonatan’s success, Ahsan and Angga continued Indonesia’s domination by thrashing world number 41 pair He Jiting and Tan Qiang 21-19, 21-18. Rising star Anthony Sinisuka Ginting nevertheless could not get away from Qiao Bin’s pressure. Ginting, the Indonesian’s nickname, failed to handle Qiao, losing 21-12, 11-21, 21-14 in 1 hour and 12 minutes, which prevented the team from winning the title quickly. In another decisive match, however, senior and junior shuttler pair, Hendra Setiawan and Rian Agung Saputro, outclassed Han Chengkai and Zhou Haodong 21-14, 21-19 in 38 minutes with Indonesia nailing the crown. JP 12.02.2018 Rezha 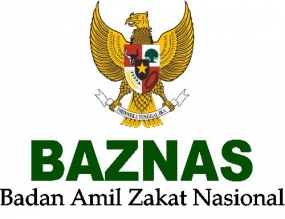 ----  The National Amil Zakat Agency -Baznas was invited by Malaysia's Deputy Prime Minister Datuk Ahmad Zahid Hamidi  to discuss cooperation between alms agencies of both countries. Through Baznas press release received by Antara in Jakarta on Saturday (10/2), Chairman of Baznas, Bambang Sudibyo and Vice Chairman of Baznas, Zainulbahar Noor met the invitation of Malaysian Deputy Prime Minister Ahmad Zahid Hamidi and Malaysian Religious Minister Jamil Khir bin Baharom. Zainulbahar Noor said, Malaysia really supports the alms movement implemented by Baznas in Indonesia. Not only the Malaysian Pungutan Zakat Center, Deputy Prime Minister and Minister of Religious Affairs of Malaysia are also very enthusiastic to assist Baznas in realizing the program of collection, distribution and accountability of the obligatory management. According to him, the relationship between Indonesia and Malaysia in the field of alms is very close// Ant/Trs.Alika 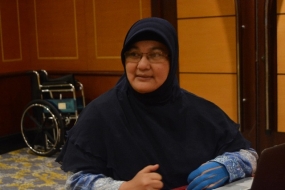 The Department of Pulmonology and Respiratory Medicine (DPKR), Faculty of Medicine of the University of Indonesia and Persahabatan Hospital held the 15th Scientific Meeting of Pulmonology and Respiratory Medicine (PIPKRA). Thi was an annual scientific event aimed at improving the quality of people’s life, by improving the quality of service. On the occasion, medical practitioners expected the government to take part in the prevention of respiratory diseases in Indonesia. This was conveyed by the Head of Pulmonary InfectionDivisionand Head of Indonesia Society of Respirology of Jakarta branch DR. Erlina Burhan at the Indonesian Scientific Respiratory Meeting (PIPKRA) 2018, in Jakarta on Saturday (10/02).

“We need the government’s participation in terms of making policy. for example we forbid our patients to smoke, but if the government do not support with the rules, the effort will fruitless. So academicians or professionals cannot work alone, we should be assisted by the government for its implementation,” DR. Erlina Burhan said.

Furthermore Erlina Burhan also said that there is also need to form public awareness such as an appeal to cover the mouth when coughing, which must be informed to the public// (VOI/Egi/trs.alika/NT)