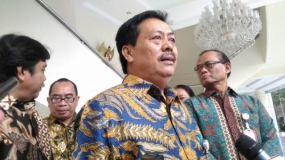 “…Reviewing current challenges of library in digital area, library must change its paradigm that library is not rows of dusty books but library must be designated as good as possible with the help of information technology. Therefore, the library can reach whole society. The parameter of library in the future is not only how many people visit the library but also how further library can build information technology application that can be accessed by the people,” Syarief Bando said.

In the meeting, Vice President Jusuf Kalla proposed the design of library programs such as book review competition in the library and storytelling to improve loving books. In this occasion, Syarif Bando invited Vice President Jusuf Kalla to attend the Library Coordination Meeting of Indonesia in the National Library Building on the 3rd or 4th of March 2018. (KBRN/Rizki/Trans:Dhyka) 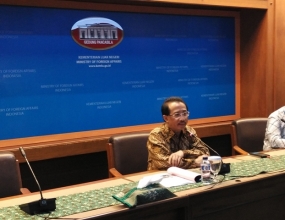 Related to Indonesia's plan to bring home advanced Russian-made aircraft, Sukhoi Su-35, Indonesian Ambassador to Russia, Wahid Supriyadi said that Indonesia will bring home the Russian combat aircraft through counter trade scheme with export commodities. Besides, in his press conference at the Ministry of Foreign Affairs, Jakarta, Friday (February 23), Ambassador Wahid Supriyadi also stated that Indonesia is certainly to participate in producing some components of the Sukhoi Su-35.

“…We plan to indeed buy 11 Sukhoi 35 jet fighters, advanced aircraft and  this is generation 4.5 in accordance with Idhan (Defense Industry) Act and there is a 50% counter trade. Well, this is 50% amounting to $550 million dollars which will be bartered with Indonesian commodities. Then, there will be 35% offset and some components of the aircraft are produced in Indonesia,” Ambassador Wahid Supriyadi said.

Referring to the payment of Sukhoi Su-35 and the use of offset schemes or the presence of components that must be produced domestically, Ambassador Wahid Supriyadi affirmed that the real amount of cash to be paid by Indonesia is only 15% or about $165 million dollars. In addition, he also expects the production of Sukhoi Su-35 aircraft components in Indonesia. The Russian side can consider Indonesia as one of the central states of service and improvement for all Sukhoi aircraft in the world. The Sukhoi Su-35 is a sophisticated fighter aircraft of the Sukhoi Corporation, Russia which is regarded as Russia's answer to the fifth-generation US-made fighter, the F-22 Raptor. Indonesia is the second country to be the owner of the aircraft equipped with electronic weaponry and aviation systems, radar systems with Irbis, phased array antenna, and the latest engine coded AL-41F-1S capable of maneuvering at high speed. (VOI/Rezha/Trans by Rhm) 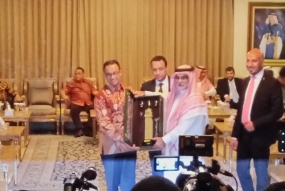 Upon its victory in the final of the President Cup on Saturday (February 17), the Jakarta Football Club -Persija was invited to have a dinner by Saudi Arabian Ambassador to Indonesia  Osama Bin Mohammed Abdullah Al-Shuhaibi at his residence on Friday (23/02). The event was attended by Governor of Jakarta, Anies Baswedan, as the guest of honor. In his speech, he agrees to what the Chairman of Persija's suggestion for the Persija football club to compete with the Saudi Arabian club and hopes to strengthen the relationship between Jakarta and Saudi Arabia.

"…And this is an example that hopefully can be a reminder to us how an ambassador feels having very close ties with Jakarta and I agree with what is disclosed by Chairman of Persija, Mr. Syafrudin. God’s willingness! (Insha-Allah), later Persija can compete with clubs from Saudi Arabia and this will strengthen the relationship between thetwo cities and the two nations,” Governor Anies Baswedan said.

In addition, Governor Anies Baswedan further said that this dinner signifies not only the Ambassador's personal feelings of being close to Indonesia and Jakarta, but this is also a friendly message between Saudi Arabia and Indonesia, as many people from Saudi Arabian embassy were celebrating the success of Persija in the President Cup event. (Egi/Trans by Rhm) 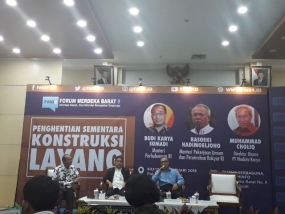 LRT Palembang to be Completed before the Asian Games

The Indonesian government decides to temporarily suspend elevated infrastructure projects. This temporary suspension is the impact of several accidents that have occurred in recent times. Director General of Railways at the Ministry of Transportation Zulfikri said that in railway, the temporary suspension is done in 5 cities. In Merdeka Barat 9 Discussion Forum held on Thursday (22/2) in Jakarta, Zulfikri said the suspension was made to give understanding to consultants and contractors on the work safety. He believes that the temporary suspension of the elevated infrastructure projects will not affect the project's targets, one of which is Light Rapid Transit-LRT in South Sumatra for Asian Games transportation.

“So now we are still focused on the completion because it has already ben completed 86 percent and the overpass structure is almost 100 percent. So now we focus on creating tracks over the overpass. It is for the South Sumatera LRT so we hope it can be completed and utilized for our great event, the Asian Games. Hopefully it can be operational in June,” Zulfikri said.

Zulfikri further explained, the LRT trials will be conducted next March on the tracks ready for the trials such as in zone 5. He hopes the LRT development in Jakarta namely Kelapa Gading - Velodrome line can be used as the operational line for the Asian Games. He said the temporary suspension on the infrastructure development will not last long. (VOI/SEKAR/AHM)