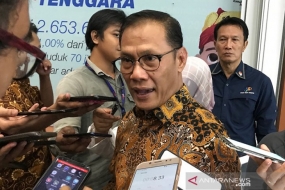 Indonesia's Inflation under Control, at 0.10 Percent in March 2020

"The figure is below three percent, so I can conclude that inflation in March 2020 was under control," BPS Head Suhariyanto remarked while holding a video press conference in Jakarta on Wednesday.

Inflation occurred due to price hikes, including the prices of food, beverage, and tobacco that went up by 0.10 percent; cost of clothing and footwear that surged by 0.12 percent; housing, water, electricity, and household fuels, by 0.02 percent; and household appliances, equipment, and routine maintenance, by 0.28 percent.

However, deflation was experienced in transportation services, notably by 0.43 percent, and information, communication, and financial services, by 0.09 percent. On the other hand, education services remained unchanged.

The Consumer Price Index (CPI) monitored by BPS in 90 cities indicated that 43 cities had experienced inflation, while 47 cities witnessed a deflation.

Lhokseumawe, Aceh Province, clocked the highest inflation rate, at 0.64 percent, mainly due to a sharp surge in the prices of fish and gold.

The highest deflation rate occurred in Timika, Papua Province, at minus 1.91 percent, caused by a plunge in the prices of air tickets, contributing 0.77 percent to the deflation rate. (ANTARA) 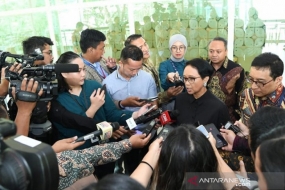 As many as 14 Indonesian nationals who were undergoing treatment in Japan, Spain, Singapore, and the Netherlands after testing positive for the coronavirus disease (COVID-19) have made a complete recovery, the Foreign Ministry said.

Nine Indonesians have recovered from the deadly virus in Japan, one in Spain, three in Singapore, and one in the Netherlands, the ministry said in a statement released via its Instagram account (safetravel.kemlu) on Tuesday.

As of 8 a.m. on Tuesday (March 31, 2020),133 Indonesian nationals have tested positive for the coronavirus outside the country — 34 in Malaysia, 34 in Singapore, four in Italy, five in Vatican, three in Vietnam, three in the Netherlands, one in Ireland, one in the United Kingdom, two in Qatar, six in Saudi Arabia, two in the United Arab Emirates, 14 in India, two in Cambodia, one in the Philippines, two in Australia, three in Brunei Darussalam, one in Macau, and three in Taiwan. All nine Indonesians who contracted the coronavirus infection in Japan are reported to have recovered, according to the ministry. (ANTARA) 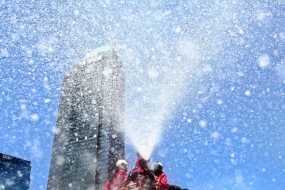 Indonesia will issue a government regulation in lieu of law (Perppu) that will boost state spending by up to Rp 405.1 trillion (US$24.6 billion) as the budget deficit is anticipated to widen to 5.07 percent of GDP in the nation’s fight against COVID-19.

President Joko “Jokowi” Widodo said Tuesday the Perppu would serve as a foundation for the government and banking and financial authorities to carry out “extraordinary measures to ensure the people’s health, safeguard the national economy and financial system stability”.

Of the extra spending, the government will allocate Rp 75 trillion for healthcare spending, Rp 110 trillion for social protection and Rp 70.1 trillion for tax incentives and credit for enterprises. The biggest chunk, Rp 150 trillion, will be set aside for economic recovery programs including credit restructuring and financing for small and medium businesses.

“I have just signed a Perppu on state finance policy and financial system stability,” Jokowi said in a telebriefing. “We will issue the Perppu to anticipate the possibility of a state budget deficit that is estimated to reach 5.07 percent.”

The relaxation of the state budget deficit limit from the current legal limit of 3 percent of gross domestic product (GDP) will apply for three years until 2022. “Afterwards, we will return to imposing fiscal discipline of below 3 percent of GDP starting 2023,” he added.

Indonesia’s fiscal discipline has been lauded, as the country has never exceeded its self-imposed state budget deficit limit of 3 percent of GDP introduced after the 1998 Asian financial crisis. The move to widen the state budget deficit, the first time in history, comes as Indonesia declared a public health emergency that involves imposing large-scale social restrictions as stipulated in the Health Quarantine Law.

COVID-19 cases in Indonesia reached 1,528 on Tuesday with 136 deaths, just a month after the nation declared it had zero cases. (The Jakarta Post)