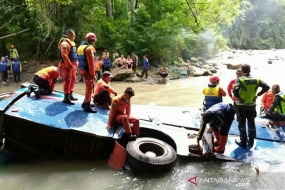 Search and rescue workers will continue to conduct their search and evacuation operations on Wednesday morning, as death toll in the Sriwijaya Bus accident rose, from 24 to 28, Tuesday, at 8 p.m. local time."The death toll possibly goes up since the evacuation process will be continued on Wednesday at 7:30 a.m. local time," Head of the Palembang Search and Rescue Agency's Operational and Preparedness Division Benteng Telau stated.The ill-fated passenger bus plying on the Bengkulu-Palembang route plunged into an 80-meter-deep ravine and crashed in the Lematang River, Pagaralam City, South Sumatra, on Monday evening.Consequently, no less than 28 people lost their lives, while 13 others survived the accident. The survivors were largely residents of the provinces of Bengkulu and South Sumatra, Telau remarked.Among the dead passengers were children named Rayhan Ghani (3), Ayu Intan (9), and Fadhil (10), as well as the bus driver, Fery, and his assistant, Yuda Sanjaya. So far, 25 of the 28 bodies could have been identified, he stated.As reported earlier, the Sriwijaya Bus that crashed into the ravine carried onboard 37 passengers. However, the actual passenger count was yet to be precisely known in the absence of an official manifest.According to Telau, those surviving this accident generally suffered injuries. The survivors included Basarudin, Hepriadi, Hasanah, Sukiyem, Aisyah Awaliah Putri, Ariri, Lukman, Aldi, Riduan, Darusalam, Riki, Haris Krisyanto, and Khadijah.The real causes of this fatal accident have yet to be publicly disclosed since the local police's investigation is still underway.In the past fortnight, Indonesia has borne witness to several fatal traffic accidents.On Saturday evening (Dec 21), for instance, the Agro Parahyangan passenger train hit a van that was making its way at a railway crossing on Bosih Road in Wanasari Village, Cibitung Sub-district, Bekasi District, West Java Province, killing seven passengers in the car."All of them died at the site of the accident," Bekasi Metropolitan Police spokesman Adjunct Commissioner Sunardi stated.According to eye witnesses, the ill-fated van's driver, Bahrudin, crossed the railway line despite being warned by local residents of the shortly arriving Agro Parahyangan train heading to Jakarta, he remarked.The traffic accident resulted in the deaths of the 51-year-old driver and six other people in the van: Watinah (50), Santi (30), Didit (12), Yanto, Syarufudin (49), and Yanda (32).They were residents of the Utan Kayu Selatan Village, Matraman Sub-district, East Jakarta 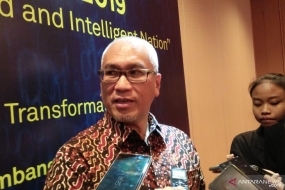 Indonesia's government will launch two special economic zones in Batam Island, Riau, in 2020, the Coordinating Economy Ministry stated in Jakarta, Monday, while it awaits the free trade and port zone (KPBPB) regulation’s revised version. "The draft revision has been completed, and we await the president (Joko Widodo) to ink the document. Once it is signed, the two special trade zones will be operational," the ministry's infrastructure acceleration and region development deputy, Wahyu Utomo, stated in Jakarta, Monday. While awaiting the revised version of the government's regulation (PP), the chairman of the special trade development/the Coordinating Minister of Economy Airlangga Hartarto had contacted officials and stakeholders to prepare for the launch of two special trade zones in Batam Island. In 2019, the authority approved the construction of two special trade zones, including a maintenance and repair facility for aircraft at the Hang Nadim International Airport and a digital hub in Nongsa. "At the Nongsa digital park, we will collaborate with the US smartphone manufacturer Apple," the deputy remarked. Once a thriving free port and bonded industrial zone, Batam Island had attracted investment reaching billion dollars regulated by an independent Batam Development Authority. Under the authority's rule, investors enjoy tariff cuts as well as a facility to acquire lands and licenses for business. However, since the regional election was launched in 2001, Batam was ruled by a local government that stripped parts of the authority's power over the island. The dualistic administrative authorities in the island has led to years of confusion and uncertainty among investors. Since President Joko Widodo took office for a second term in 2019, his administration had planned to merge the two authorities and change the status of the island, from a free trade zone to a special economic zone. (ANTARA) 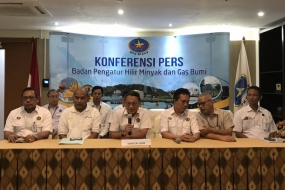 Minister of Energy and Mineral Resources (ESDM) Arifin Tasrif has assured adequate supply of fuel oil ahead of the Christmas and New Year celebrations. "We have seen the availability of available stocks in these areas. Indeed there are one or two whose stocks must get attention. But, it can be sent and it seems that it is close to those areas, "Arifin told the press when reviewing national coordination center at the office of The Downstream Oil and Gas Regulatory Agency (BPH Migas), Jakarta, Monday.The areas where the majority of the population celebrate Christmas also received priority for the allocation of fuel, Arifin said.In addition, Arifin who is also the former Indonesian Ambassador to Japan urged the officials from State-Owned Enterprises to coordinate with others in an attempt to meet the fuel needs of the community."We ask state-owned electricity firm PLN, State-owned gas distributor PT Perusahaan Gas Negara (PGN) and State-owned oil and gas holding company Pertamina to cooperate and synergize with different agencies," the minister said.So far, there have been no significant obstacles, bearing in mind the various challenges that can be anticipated, according to Arifin."So far, it can be seen that we anticipated correctly," he said.A National Coordination Center of Energy and Mineral Resources sector has also been arranged on every island in Indonesia, Head of The Downstream Oil and Gas Regulatory Agency (BPH Migas) Fanshurullah Asa said."We have arranged for a national coordination center on each island. We send officers to check the supply of fuel," he said.

Indonesia People’s Consultative Assembly (MPR RI) Chairman Bambang Soesatyo put forth the suggestion to establish a world Muslim consultative assembly association, especially for member countries of the Organization of Islamic Cooperation (OIC)."We hope the MPR RI and Shura Council of Saudi Arabia would be the pioneers," Soesatyo noted in a statement received in Jakarta, Tuesday.Soesatyo along with several vice leaders of MPR, Hidayat Nur Wahid, Ahmad Muzani, Jazilul Fawaid, Arsul Sani, and Fadel Muhammad had paid an official visit to Saudi Arabia.In the company of Indonesia Ambassador to Saudi Arabia Agus Maftuh Abegebriel, the leaders met King Salman bin Abdul Aziz, chairman of Shura Council Muhammad Ibrahim al-Sheikh, as well as General Secretary of World Muslim League, and other stakeholders.The official government visit between the two countries, including inter-parliamentary visits, is a form of good diplomacy and can intensify relations between both leaders to implement all the inked partnership agreement, Soesatyo stated.Responding to the suggestion, Ibrahim al-Sheikh welcomed it as part of parliamentary diplomacy to bolster partnership relations between Indonesia and Saudi Arabia.The MPR RI was urged to formally put forth its suggestion to form the world Muslim consultative assembly association through a written proposal, so it can later be followed up by the Shura Council of Saudi Arabia.The Council is the Saudi Arabia parliament institution, with some 150 members of experts and senior figures inaugurated by the King, of which 30 are women.Its authority encompasses giving suggestions to the King and his ministers, review and interpret the laws, as well as improve the laws and international contracts.