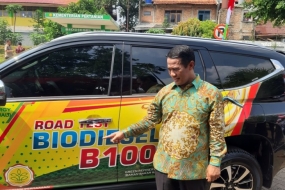 B100 is Answer to Indonesian Palm Oil Discrimination by EU

Indonesia’s Minister of Agriculture Amran Sulaiman had affirmed that B100 Biodiesel from crude palm oil (CPO) that was tested on Monday was the key to fighting the European Union (EU)’s discrimination against palm oil.“This is the right answer to the protests by the EU,” said Sulaiman in Jakarta on Monday.He stated that with the EU claiming palm oil was environmentally unfriendly, palm oil exports could be diverted to new and renewable energy by using it for domestic needs.Sulaiman added that Indonesia exports CPO to around 140 countries, including India, the European countries, China, Pakistan, Bangladesh, and several other major countries.“At present, we have reached 6.01 million kiloliters B20. Later on, for B30, let’s say it could reach 13 million kiloliters. Then with B100, maybe we will also reduce CPO exports overseas to fulfill domestic needs. We just have to see which countries need Indonesian palm oil,” he said.During the soft launch and first trial of B100, the minister filled up a four-wheeler tractor with B100 while demonstrating its eco-friendly advantages, such as not producing smoke, to the media.B100 products are one of the innovations introduced by the Ministry of Agriculture through the Agricultural Research and Development Agency (Balitbangtan). The agency’s researchers developed a multifunctional biodiesel reactor that had reached its 7th generation.This machine can process 1,600 liters of raw material every day. All this time, biodiesel was being mixed with petroleum fuels in certain amounts. However, with this new technology, the B100 contains 100 percent natural ingredients, without being mixed with other substances.Previously, the EU had considered palm oil as a risky commodity through the issuance of a “Delegated Regulation” which is derived from the “Renewable Energy Directive (RED) II”.This regulation will be applied if it is approved by the European Parliament for a maximum period of two months since the draft regulation was submitted on March 13, 2019.The palm oil discrimination by the EU had invited strong criticism from the Indonesian government, including Vice President Jusuf Kalla who threatened retaliation if the region boycotted Indonesian palm oil products. (ant) 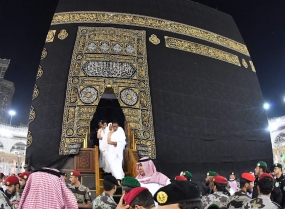 The President Joko Widodo and first lady Iriana Joko Widodo alongside his two sons Gibran Rakabuming Raka and Kaesang Pangarep has been on going for ' umrah worship on Monday morning, April 15, 2019.  On that occasion, President, First lady and groups of limited opportunity to go inside the Kaaba. After entry into the Kaaba, President Joko Widodo joint groups of performing circumambulation which then continued with the Fajr pray in front of Multazam. (News and photos: BPMI Setpres) 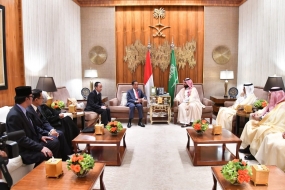 The Foreign Minister Retno Marsudi who accompanied the President during the bilateral meeting said that Indonesia-Saudi Arabia agreed to establish a leader-level consultation mechanism and hold meetings once a year.

Saudi Arabia is interested in collaborating in the fields of energy and petro chemistry. This was conveyed again by the Crown Prince.

President Jokowi also said that Indonesia wanted to be part of the implementation of Saudi Arabia's Vision 2030.

In the meeting, the Crown Prince conveyed the decision to add 10,000 pilgrimage quotas to Indonesia. 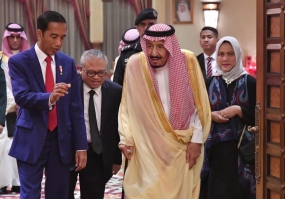 "President Jokowi and King Salman agreed in the future, economic cooperation will continue to be improved, especially in the fields of energy and tourism," said Foreign Minister Retno Marsudi after the meeting.

Foreign Minister Retno Marsudi who accompanied President Jokowi at the bilateral meeting said that King Salman also appreciated Indonesia for its leadership in the Islamic world. "From the discussion, there was a very close relationship between the two heads of state," Retno said. (biro pers )