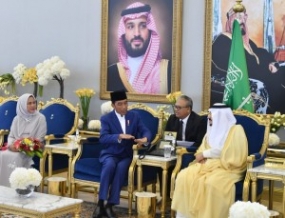 President Arrived in Riyadh Will Meet King and Crown Prince

At the airport the President and Mrs. Iriana were welcomed among others by the Indonesian Ambassador to the Saudi Arabian Kingdom Agus Maftuh and the Governor of Riyadh Prince Faisal bin Bandar Al Saud and the Minister of Trade and Investment Majid Bin Abdullah Al Qasabi.

The plan at noon local time, the President will attend the invitation of King Salman bin Abdulaziz Al-Saud for a lunch together and continued with a meeting at the Palace in Riyadh.

After meeting with King Salman, later in the evening, the President will meet with Crown Prince Muhammad bin Salman. 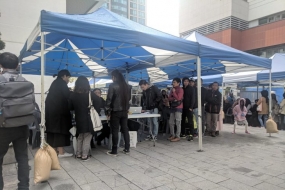 Thousands of Indonesians in Korea Enthusiastic to Vote

Thousands of Indonesian citizens living in South Korea have come to the Embassy of the Republic of Indonesia in Seoul to participate in the presidential and legislative elections on Sunday, although they had to queue long and some did not necessarily get voting rights.They came from various regions of Korea, including Daejeon, a distance of hundreds of kilometers from Seoul and small industrial cities like Ansan on the outskirts of the capital."The voting today is safe and under control. Not only in Seoul but also in other polling stations," said the chairman of the Seoul Overseas Election Committee (PPLN), Huda Ulinuha.At the Indonesian Embassy, there are around 3,000 people registered in the final voter list. The figure has not counted hundreds of other Indonesian citizens who register in the place (special voter list - DPK) and have to wait for the rest of the ballots. They are those who are not certain yet to get the right to vote.Some of those who have included in the special voter list have previously claimed to have been registered in the final voter list at other polling stations. However, because the polling stations set by PPLN were too far from the initial domicile, they finally asked to move the polling stations to Seoul which is easier to reach."I am domiciled in Incheon (Seoul's western suburb - ed), but my polling station is in Daegu, which is too far (more than 200km - red). Finally I asked to move to the polling station in Seoul," Christian Ho said.In addition, many residents also sent ballots directly to the embassy for fear of not arriving. Actually they can send ballots by post to the embassy.Overall, there are around 26,000 permanent voters in South Korea. As many as 8,000 of them chose to use the direct voting method to polling stations in four cities. Around 13,000 people use the postal method, while the rest are waiting for mobile polling stations in the outer cities of Korea. (ant) 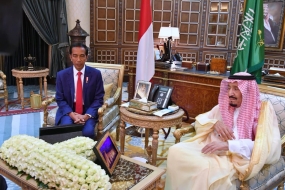 Saudi Arabia Appreciates Indonesian Leadership in Regions and the World

This was one of the points of discussion when President Joko Widodo received a courtesy call from the Minister of Foreign Affairs of the Kingdom of Saudi Arabia, Adel Al Jubeir. The meeting took place at the Royal Guest House, Riyadh, Sunday (4/14).

"The meeting discussed, among other things, how the two countries increased bilateral cooperation. From the Saudi side stressed a lot more or less the same position that Indonesia and Saudi Arabia have had on various issues, "said Foreign Minister Retno Marsudi after the meeting.

Retno said, during the meeting President Jokowi and the Saudi Minister of Foreign Affairs also discussed cooperation in the framework of broadcasting peaceful Islam, tolerant Islam, and also cooperating in the context of counter-terrorism.

In addition, President Jokowi and the Saudi Minister of Foreign Affairs also discussed the issue of how the two countries could increase cooperation in helping support the Palestinian cause.

"It is known that the future of Palestine becomes more difficult and becomes an obligation for Saudi Arabia and Indonesia to continue to improve cooperation and to support the Palestinian cause," said Retno.

Also accompanying the President at the meeting were Minister of Foreign Affairs Retno Marsudi, Chief of Staff of the President of Moeldoko, and Indonesian Ambassador to the Kingdom of Saudi Arabia Agus Maftuh Abegebriel. (biro pers ) 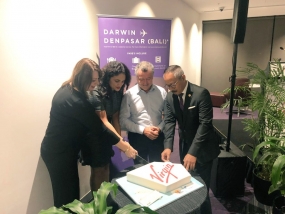 Consul Dicky Soerjanatamihardja and Indonesian Consulate team attended the ceremony launch of Darwin to Denpasar, Bali of Virgin Airlines on 10th April. It is part of Virgin Australia’s first flight from Darwin to Bali.