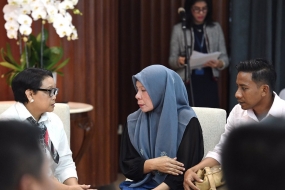 Return of Indonesian Citizens from Philippines

Minister of Foreign Affairs, Retno Marsudi officially submit on Thursday ( 11/ 4 ) Heri Ardiansyah to the family. At the same time, Mme. Marsudi also submit it symbolically corpse of Hariadin who died in the process of liberation in Southern Philippines.

On behalf of the Government, Mme. Retno Marsudi convey deep condolences over the death of Hariadin and hope the family can be resilient in the face of this ordeal. Both the Indonesian citizens taken hostage by armed groups in the southern Philippines since December 2018. (twitter menlu) 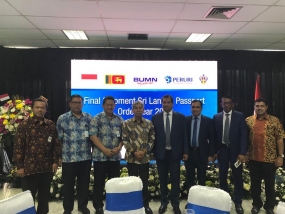 Vice Minister of Foreign Affairs, M. Fachir attended the inauguration of the second stage of delivery of 500 thousand Sri Lankan passport produced by Peruri, by the Minister of State Owned Enterprises of Indonesia and Minister of Internal Affairs of Sri Lanka, in Wisma Peruri, Karawang, West Java early this week.

The success of Peruri entered the market of Sri Lanka demonstrated the ability of RI competing in global markets". Delivery was part of the total orders 1 million Sri Lankan passport values USD 2 million, in line with the results of the visit of President Joko Widodo to Colombo, January 2018.

Mr. Fachir make sure that economic diplomacy by the Ministry of Foreign Affairs will continue to support national businessmen to penetrate potential non-traditional markets. (mofa) 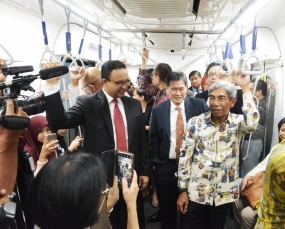 Vice Minister of Foreign Affairs M. Fachir along with Jakarta's Governor, Anies Baswedan inaugurated the name of ASEAN on the one Mass Rapid Transport station that is located on Jalan Sisingamangaraja. (10/4). Mr. Fachir convey that the inauguration of the ASEAN MRT station is showing the importance of ASEAN for Indonesia as Jakarta's position solidified and Capital for ASEAN. With the MRT, connectivity is becoming more efficient in time, easy and convenient. Mode of transportation is an important investment for the progress of the nation. One of the efforts to reduce dependence on private transport in Jakarta is to realize the MRT Jakarta which can be accessed by all the people. (mofa)

Women are not only part of the solution, but also a source of peace and security ", said the Indonesian Minister of Foreign Affairs, Retno Marsudi, when officially opening the Regional Training on Women, Peace and Security (WPS) event held in Jakarta, Indonesia on 8 - April 10, 2019.

Furthermore, the Indonesian Foreign Minister delivered 3 (three) suggestions to ensure that women's involvement in security and peace. First, it emphasizes the importance of the role of women as agents of peace and tolerance. Second, doubling efforts to mainstream the role of women in the peace agenda in the Region. Third, build and foster a network of female negotiators and mediators in the Region.

To realize these three things, the Ministry of Foreign Affairs has held a Training on Women, Peace and Security for around 60 female diplomats from ASEAN member countries, Timor Leste and Papua New Guinea. The activity aims to be a place for learning and sharing best practices for young female diplomats in building capacity to analyze and prevent conflicts, and build post-conflict peace.

The training also seeks to align with Indonesia's commitment to being a non-permanent member of the UN Security Council and ASEAN commitments as stated in the "Joint Statement on Promoting Women, Peace and Security in ASEAN" adopted by ASEAN leaders on November 13, 2017 at the ASEAN Summit 31st in the Philippines.

In a broader context, women also play a key role in maintaining peace through their role in the economic, social and cultural fields. Moreover, the UN Women research shows that women's participation in peace negotiations increases the possibility of sustainable peace by 20%.

However, despite the important contribution of women in peace and security, women's representation and role is still inadequate in various phases of the peace process. Seeing this, there is a crucial need to actively support women's participation in the ongoing peace process before, during and after the conflict.

For three days, the regional training participants had discussed and shared best practices with panelists who were full of experience in issues of peace & security. The panelists consisted of figures from the military and police, government, think tanks and non-government organizations. Participants will also be invited to visit the Social Rehabilitation Center for Children in Need of "Handayani" Special Protection (BRSAMPK) and the Indonesian Peace and Security Center (IPSC) Region.

With this activity, Foreign Minister Retno hoped that the role of women in peace and security should not be extraordinary, but rather became the norm. (mofa indonesia)