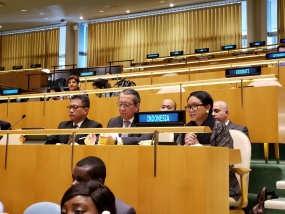 No country is free from racism, intolerance, and hatred". It was stated by the Indonesian Foreign Minister, Retno Marsudi, during the signing of the resolution of UN General Assembly (GA) on combating terrorism and acts of violence motivated by hatred against religion in New York Monday.

In response to the growing phenomenon, Minister Marsudi reiterated that “There is a demand for joint actions to encourage global dialogues promoting tolerance and peace".

The efforts include promoting inter-religions and inter-civilizations dialogues, in the world. As a country of various races, ethnic groups, and religions, Indonesia claims its readiness to share its experiences in living the cultural diversity that has become a part of the daily lives of Indonesian people.

Indonesia is one of the co-sponsors of the resolution that firmly address the terrorist acts in Christchurch, New Zealand, on 15 March 2019. Indonesia strongly condemns the action that claimed 50 lives, including one Indonesian citizen, as well as dozens of other injured victims.

On 15 March 2019, Indonesia and Kuwait sponsored a Press Statement of the UN Security Council condemning this vile incident. With the adoption of the UN GA Resolution through consensus, Indonesia's efforts to respond the acts of terrorism in Christchurch, quickly and firmly, have succeeded in gaining wider support from the states all over the world.

At the same time, the Indonesian Foreign Minister emphasizes the importance of the government's role in creating and maintaining the culture of tolerance among its people.

Therefore, Minister Marsudi expressed her appreciation to the leaders and people of New Zealand who reacted quickly and showed their solidarity for Muslims after the terrorist act broke in Christchurch. (kemlu) 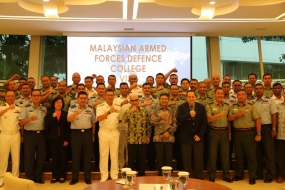 Malaysian Officers on Visit to Indonesia

The discussion focus priority Polugri pd role Indonesia & amid increasing competition in the Indo-Pacific as well as the improvement of various bilateral kjsm RI-Malaysia. Officers students were enthusiastic to get deeper into the role of Indonesia in ASEAN centrality of strengthened cooperation Indo Pacific.

The visit of the Malaysian Armed Forces Defense College to Indonesia during March 31 – April 5, is part of the Regional Field Study (SFR) of the College. The visit aims to raise trust and cooperation of the two countries, especially in the field of Defense. Students of the College also visited, among others Ministry of Defense , and the national resilience Institute, Lemhannas, & National Planning Agency, Bappenas. (kemlu) 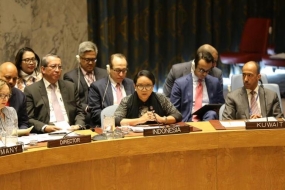 Indonesia will always place the issue of nuclear disarmament as one of its prioritized agenda and consistently support the NPT implementation". Indonesia's Minister for Foreign Affairs stated at the High-Level Briefing on Supporting the Non-Proliferation Treaty Ahead of 2020 Review Conference in New York, the United States on Monday (2/4).​

Indonesia encourages that the main goals of the NPT need to be achieved through consistent implementation of its three pillars: pillars of disarmament, non-proliferation, and the use of nuclear for peaceful purposes, in a balanced, comprehensive, and non-discriminative manner. So far, the NPT agreement implementation is still considered impartial and has yet provided sufficient attention towards developing countries' access for the peaceful use of nuclear technology.

The year 2020 will become the milestone for the five-decade commemoration of the NPT agreement officiation. Indonesia plays an important role in the process by acting as the Chair of the Non-Aligned Movement Group for non-proliferation and disarmament, and thus represents the voices of the developing countries.

Indonesia emphasizes that the results of the 2020 NPT Review Conference has to perform progressive steps, especially to ensure the rights of all countries to use nuclear energy for peaceful purposes. Indonesia also affirms its commitment to constructively engage with all parties in the issue of nuclear disarmament as an attempt to establish a safer, more peaceful, and prosperous international world.

Indonesia's Minister for Foreign Affairs stated, "The survival of humanity will depend on our courage to abolish the nuclear weapons, forever". (Min. Foreign Affairs) 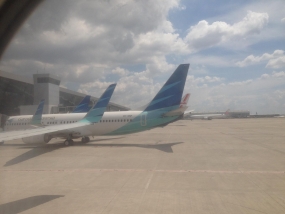 A Garuda Indonesia GA 972 flight, en route from Banda Aceh to Jeddah, Saudi Arabia, made an emergency landing at the Bandaranaike International Airport, Colombo, Sri Lanka, Tuesday (Apr 2), at 9 local time.Garuda Indonesia's Vice President Corporate Secretary Ikhsan Rosan gave confirmation on the incident through a text message service received by Antara on Wednesday. Rosan noted that the aircraft was left with no option but to make an emergency landing owing to a drop in the cabin air pressure."The flight had to make a landing in Colombo due to a decrease in the cabin pressure," Rosan noted.Rosan added that currently, a replacement aircraft had taken off from Denpasar, Bali, to Colombo at 12:30 local time. For the interim period, passengers had been accommodated in Colombo, Rosan revealed."To ensure that the safety and comfort of passengers is not compromised, the pilot took the decision to make a landing in Colombo and replace the aircraft. All passengers are safe and will continue their trip to Jeddah," he stated.The wide-bodied aircraft was carrying 338 passengers onboard. Fire trucks and ambulances were readied at the Colombo Airport prior to the emergency landing. An investigation is still underway into the incident.  (ant)