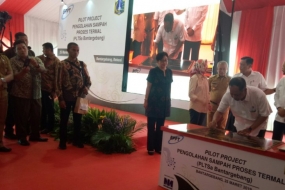 A pilot project of a waste-to-energy power plant (PLTSa) in Bantargebang landfill in Bekasi, West Java, is now ready for operation after it was launched here on Monday.The waste-to-energy plant was built by the Agency for the Assessment and Application of Technology (BPPT) and the Jakarta Government."Now, the plant is in commission, and of course it will need further enhancement by BPPT and the Jakarta Government," head of the agency Hammam Riza said at the inauguration of the Bantargebang PLTSa pilot project.The Coordinating Minister for Maritime Affairs, Luhut Binsar Pandjaitan; Minister of Research, Technology and Higher Education Mohamad Nasir; and Riza pushed the siren button to mark the inauguration of the power plant.It took only one year to complete the project that cost Rp98 billion after its groundbreaking ceremony on March 21, 2018, and it is expected to become fully operational within the next few weeks."Within the next few weeks, it will be fully functional, and thus, it can function as a research and development center," he said.The waste-to-energy plant has the capacity to process 100 tons of garbage per day, and produce 700 kilowatts of electricity per hour as a bonus."The electricity produced by the PLTSa will be used to meet the facility's needs," he said.  (ant) 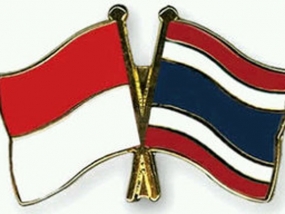 Indonesia's direct bilateral trade with Thailand, under the local currency settlement framework, reached Rp121 billion during the period from January to February, a fourfold increase compared to Rp30 billion during the same period in 2018.Indonesia's central bank (BI) Governor Perry Warjiyo noted in a statement on Monday that the bilateral trade, on an average, has reached Rp58 billion per month."Since its implementation on December 11, 2017, the total trade transaction, under the local currency settlement framework, has shown an increase," Warjiyo remarked.The local currency settlement (LCS) is a framework of bilateral trade transaction using local currencies.Indonesia and Thailand had first implemented the LCS framework in December 2017. The framework is aimed at reducing both countries' dependency on the US dollar and increase the bilateral trade volume.Implementation of the LCS became the main topic of discussion at the bilateral meeting between BI Governor Warjiyo and Governor of Bank of Thailand Veerathai Santiprabhob in Jakarta."The strategic meeting has discussed the development of both countries' economy, direction, and implementation of the central banks' policy, especially regarding the payment system," Warjiyo remarked.He said the two central banks had emphasized the importance of economic and digital financing development with the latest innovations in technology, including the implementation of the quick response code (QR Code), to boost both countries' economic growth.BI and the Bank of Thailand have mitigated the potential risk of the development of the payment system regarding the stability of the financial system as well as anti-money laundering and prevention of funding for terrorism."The (central banks') governors have enhanced commitment to strengthening mutual cooperation between the two central banks and continuing the bilateral meetings at the level of the central banks' leaders as well as technical meetings," he added.  (ant) 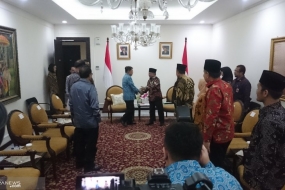 Vice President Jusuf Kalla and leaders of the Indonesian Ulema Council (MUI) on Monday discussed the plan to build the Indonesian Hospital in Hebron, the West Bank, Palestine."This is because the area, with a population of 800 thousand people, of which some 200 thousand are Jews and 600 thousand are Arabs, has yet to have a special trauma healing hospital," Muhyidin Junaidi, chairman of the committee for construction of the Indonesian Hospital in Hebron (RSIH), noted.Speaking to journalists after the 60-minute meeting with the vice president in Jakarta on Monday, Junaidi, who is also head of MUI's head of international relations, noted that the hospital will serve all residents in Hebron."Currently, the Arabs have received discriminative treatment by Israelis in the hospital in Hebron," he noted.The Indonesian Hospital is expected to relieve the suffering of the Arabs in Palestine, he added.The hospital will be built on an endowment land measuring four thousand square meters, with a total cost of some US$7 million.Muhyidin noted that the local government will help the MUI to check the legal documents of the land.Vice President Kalla has fully supported the plan to build the RSIH."He (Jusuf Kalla) said, (this plan) should be well-executed, and he shared his optimism for this humanitarian mission," Muhyidin added.(ant) 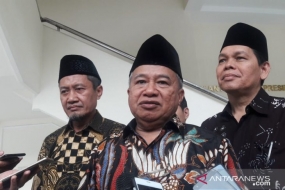 MUI calls on people to cast votes in elections

The Indonesian Ulema Council (MUI) has called on the people to cast their votes in the general elections scheduled to be held on April 17."We should use the legislative election and presidential election as a medium to show our maturity, and to think with common sense," the council's Head of International Relations Muhyidin Junaidi said in Jakarta on Monday.He called on people to maintain unity and not be divided because of different political choices.People should behave maturely to recognize the results of the election. "Do not use the legislative and presidential elections as a medium to divide people. Differences in choices are inevitable, but this should not divide the nation.""The Indonesian Ulema Council will pray for smooth and peaceful elections, Insya Allah (God willing)," he said.Muhyidin reiterated that people should not abstain from voting, as it is not allowed in Islam.(ant)