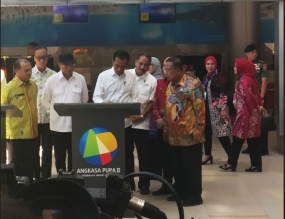 The Government on Thursday (14/3) inaugurated Tanjung Kelayang Special Economic Zone (SEZ) in Bangka Belitung province. This special economic zone is built on a ​​324-hectare land and is expected to attract Rp10.3 trillion investments and provide employment for around 23,645 people.

Coordinating Minister for the Economy Darmin Nasution said that Tanjung Kelayang Special Economic Zone is expected to transform economy in Bangka Belitung province from tin mining based economy into the one based on world-class tourism.

“This special economic zone is strategically located between Jakarta and Singapore and has a good potential for future captive market,” he added.

Several investors including international hotel networks such as Starwood Asia Pacific and Accor Asia Pacific, he added, have also expressed interest to make investment at this special economic zone.

President on his visit to Bangka Belitung Province also inaugurated the extension of Depati Amir airport, visit to the market and distributed land certificate (kemenko perekonomian and other source) 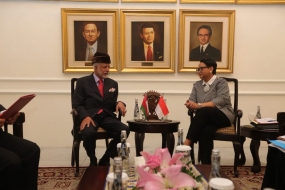 On behalf of the Indonesian Government, Foreign Minister Retno Marsudi expressed her appreciation for the facilitation of the Omani Government towards Indonesian citizens living in Oman, including the release of an Indonesian citizen detained by armed group in Yemen since November 2018. Both Ministers also discussed the issue of Middle East region, especially the issue of Palestine. Indonesia reiterated that the Palestinian issue is one of the special focuses in Indonesia’s foreign policy. 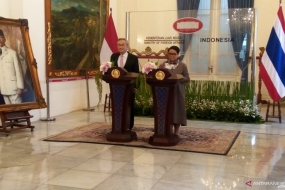 Indonesia Offers to Cooperate with Thailand to Stabilize Rubber Price

"Indonesia, Thailand, and Malaysia are three major rubber exporting countries. Hence, Indonesia has emphasized the need to strengthen cooperation in stabilizing the rubber price, because the three nations are the most affected by the global decrease in rubber price," Indonesian Foreign Affairs Minister Retno L.P. Marsudi stated here, Wednesday, following a bilateral meeting with her Thai counterpart, Don Pramudwinai.The decrease in rubber price has become a cause of common concern for Indonesia and Thailand, both of which are major producers of the commodity.The two ASEAN member countries have agreed to discuss common efforts to stabilize the rubber price, which has decreased over several months.Meanwhile, the bilateral trade balance between Indonesia and Thailand had reached US$17.77 billion in 2018.Indonesia's exports to Thailand included machines, electricity equipment, food, paper products, and vehicle accessories.Thailand has mainly exported motor vehicles, metal products, steel, textiles, and food to Indonesia. (ant) The fish market is always identical to the smell, dirty and disorganized. This negative image to become one of the reasons the Government to build a fish market with the concept of clean, hygienic and modern as the Modern fish market (PIM) Muara Baru. President Joko Widodo inaugurated the first modern fish market at Muara Baru, North Jakarta.

After inaugurating the Modern fish market New Estuary, Wednesday (13/3) night, the President Joko Widodo who was accompanied by the Minister of marine and Fisheries Susi Pudjiastuti as well as groups, reviewing at once bought fish from one of the traders in the market.