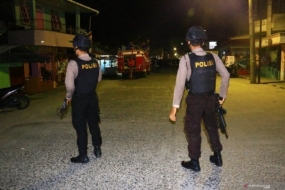 Remains of Bombs in Sibolga Attack to be Destroyed on Thursday

The remains of the homemade bombs that the Indonesian police found inside the home of a terror suspect in Sibolga, North Sumatra Province, on Wednesday would be destroyed at the backyard of the Central Tapanuli police office on Thursday, a police spokesman said.For safety reasons, the police investigators warned local residents to avoid entering the terror suspect's home as the bomb’s remains were still found inside, North Sumatra Police Chief Inspector General Agus Andrianto told journalists in Medan on Wednesday.The wife and child of Husein, alias Abu Hamzah, a terror suspect, were killed inside the house, located in front of Al Mukhlisin Mosque at Cendrawasih Street, Sibolga, the capital city of Central Tapanuli District, North Sumatra Province, on Wednesday.According to Andrianto, the remains of the bombs would be destroyed at the backyard of the Central Tapanuli police precinct, considering the local residents' trauma after the bomb blasts.The bodies of Husein's wife and child had been evacuated to Sibolga Public Hospital for being checked and identified by the police's Disaster Victims Identification (DVI) team members, he stated.In the meantime, National Police Chief General Tito Karnavian noted earlier that the suspected terrorists arrested in North Sumatra Province's Sibolga and Lampung Province were part of the networks affiliated to the Islamic State of Iraq and Syria (ISIS) group."They belong to the networks affiliated to ISIS," he remarked, after attending a get-together at the Al Kautsar Islamic boarding school in Medan, North Sumatra, on Tuesday night.(ant) 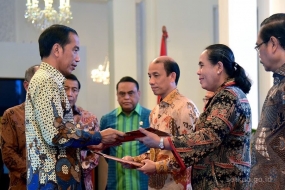 President Joko Widodo received the documents corruption prevention Action of the year 2019 and 2020 – report of the implementation of the national strategy for prevention of Corruption the year 2019, at the Istana Merdeka, Jakarta, Wednesday (13/3) afternoon.

The President highly appreciated the hard work of all parties in the last four years, with his vigorous, continuous pressing corruption. 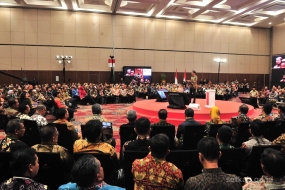 To further improve the investment realisation, there is nothing in the investment coordination meeting that was held today (12/3), President launched the Coordination control of Investments utilizing applications (KOPIMANTAP). As many as 1,200 local apparatus will have access the application of investment to ensure the control of qualified investment can be realized and the positive impact towards job creation and the improvement of people's income. (setkab) 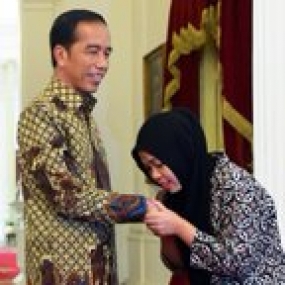 President Jokowi: This is a Form of Government Concern

After the meeting which lasted around 15 minutes, President Jokowi told reporters to express his gratitude because Siti Aisyah had been able to be freed from the threat of a very heavy sentence, and had been able to rejoint her family.

President Jokowi explained that the release of Siti Aisyah was the result of a long legal assistance process from the government. Among others, by hiring a lawyer, which was done since Siti was arrested in Malaysia, about 2 years ago. "This is a manifestation of the government's concern for its citizens," he said.

Officially, the President continued, the government represented by the Minister of Foreign Affairs  Retno Marsudi had handed Siti Aisyah to her family. The Head of State advised that for the time being, Siti Aisyah would be at home first until later she was rather calm and could plan her life again.

Also accompanying President Jokowi on this occasion was Minister of Foreign Affairs Retno Marsudi, Minister of Law and Human Rights Yasonna Laoly, Minister of State Secretary Pratikno. While Siti Aisyah came to the Merdeka Palace accompanied by her parents and sister.

As is known, Siti Aisyah was released by the Malaysian High Court from the charges involved in the murder of Kim Jong-nam. The Public Prosecutor at the Selangor High Court, Darul Ehsan, Malaysia, Muhammad Iskandar bin Ahmad, has withdrawn charges against Siti Aisyah, from a trial that has been going on since March 1, 2017. (setkab)