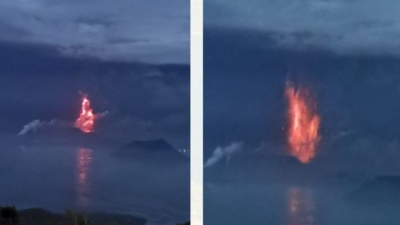 A volcano in the Philippines has begun spewing lava, as authorities warn that a "hazardous eruption" is possible "within hours or days".

In the early hours of Monday, a weak flow of lava began seeping out of Taal volcano - located some 70km (45 miles) south of the capital Manila.

Taal had earlier emitted a huge plume of ash, triggering the mass evacuation of 8,000 people from the area.

Taal is the Philippines' second most active volcano.

Situated on an island in the middle of a lake, it is one of the world's smallest volcanoes and has recorded at least 34 eruptions in the past 450 years.

Authorities in the surrounding province, Batangas, have declared a "state of calamity", signifying major disruption.

On Sunday, the volcano emitted a giant plume of ash, with rumbling sounds and tremors also reported.

A total of 75 earthquakes have occurred in the Taal region, with 32 of these earthquakes ranking 2 and higher on the earthquake intensity scale, said Phivolcs.

"Taal volcano entered a period of intense unrest... that progressed into magmatic eruption at 02:49 to 04:28... this is characterised by weak lava fountaining accompanied by thunder and flashes of lightning," the Philippine Institute of Volcanology and Seismology (Phivolcs) said in a statement. (BBC)

More in this category: « A Swinging Success: Hong Kong Open Draws the World’s Top Players, Strong International Turnout for the 61st Edition Bad Air in Melbourne Stop the Australian Open 2020 Qualification Match for One Hour »
back to top
INTERNATIONAL NEWS