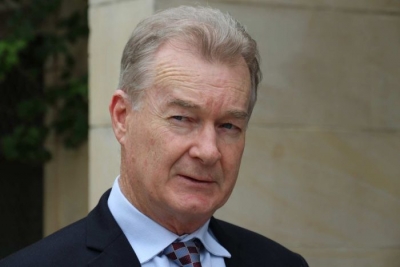 PHOTO: Dr Paul Armstrong said there were no alarming reasons to increase the risk of travel to Bali. (ABC News: Eliza Laschon)

The West Australian Government says there is no reason for Australian tourists to avoid travelling to Bali, despite reports of the first case of coronavirus being linked to the popular holiday island. WA Health Minister Roger Cook said Indonesian authorities were aware of a Chinese national who travelled through Bali who may have tested positive for coronavirus. He said health officials were closely monitoring the situation.

"Now obviously we need to monitor carefully the spread of this disease outside China," Mr Cook said.

"This is a new situation because obviously Bali represents the playground for a lot of West Australians."

It was unclear whether the person potentially contracted the virus in China and then travelled to Indonesia, or whether they may have been exposed to the virus in Indonesia. The Chinese national is understood to have returned to Shanghai, where the positive diagnosis was made. Mr Cook said people should not cancel travel to Bali as a result of the development. "We are not saying that people have to curtail their trips to Bali," he said. "At the moment DFAT [the Department of Foreign Affairs and Trade] has the same travel advisory for Bali, so people shouldn't be alarmed.

"We are simply providing this information in the interests of transparency to make sure that we continue to provide people with the most up-to-date information as possible." Prime Minister Scott Morrison today confirmed a travel ban from China to Australia would be extended for another week. Mr Cook said Border Force officers would continue to meet all flights arriving into Perth Airport and nurses would continue to be stationed at the Airport around the clock to manage people who may require testing. WA health officials had tested about 10 people per day for the virus over the past week. In total, 81 people have so far been tested in WA and all had returned a negative result. Communicable Disease Control director Paul Armstrong said there were no confirmed cases of coronavirus in Bali.

"Officially, Indonesia doesn't have any cases at all," Dr Armstrong said.

"Neighbouring countries of Indonesia of course have got several cases each but nothing alarming, nothing that would really elevate the risk of people travelling there." Dr Armstrong said Australia had offered support to Indonesia for increased testing if required. (ABC)

More in this category: « Singapore Confirms Three New Cases of Coronavirus, Bringing Total Number of Cases to 50 Russian Ambassador Reiterates Russia Stance On US President Donald Trump’s “Deal Of The Century” »
back to top
INTERNATIONAL NEWS