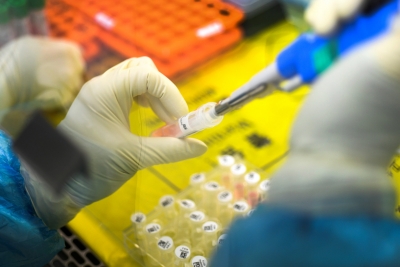 Samples in a lab which are being tested for coronavirus. Chinatopix, via Associated Press

Fears that the novel-Coronavirus may be spreading at a faster rate than previously estimated have arisen after a new diagnosis technique uncovered far more suspected cases since Tuesday.

According to CNA’s Beijing correspondent Olivia Siong, in their studio on Wednesday, Medical staff using CT scans in Hubei Province, China, say diagnoses of pneumonia and possible novel-Coronavirus cases have elevated sharply since Tuesday (11/02/2020), with up to 15,000 new infections discovered.

Following the outbreak in December 2019, the virus has infected an estimated 60,000 people and claimed the lives of 1,300. The increase in infections comes as a blow to the province, which has experienced shortages in medical supplies since transport lockdowns came into effect at the end of January and quarantining an unprecedented 50 million people in the province, according to The New York Times. The global infection rate sits at just above one per cent while the infection rate in Hubei hovers around four per cent, raising concern about the effectiveness of Chinese authority’s efforts to slow the spread.

Ms Siong explained the discontent within Mainland China over methods officials used to deal with the issue. The punishment of doctors who initially sounded the alarm of a “SARS-like” virus early on sparked anger among the Chinese people. Ms Siong said they believe authorities could have prevented the emergency sooner had they not ignored the doctor’s warnings.

"With the case of Dr Li, he was one of the first to sound the alarm of a SARS-like virus but if you recall, eight people in Wuhan were reprimanded for spreading so-called rumours and false information. And so many people feel that if they had been taken seriously, the situation may not have gotten to this stage that we are seeing today," Ms Siong told CNA.

She mentioned the further fallout China was facing following the end of the Lunar New Year celebrations. 160 million Chinese people’s travel has been disrupted following the Lunar NY break, alongside fears that China’s slowing economy, at its lowest point in 30 years, will be unable to recover from the losses they are feeling in tourism, trade, and labour-power. Many countries, including Indonesia have begun placing harsh travel restrictions and bans on Chinese citizens. (VOI/LAURA GREEN)

More in this category: « BP Boss Plans To 'Reinvent' Oil Giant For Green Era Indonesia - Australia will Implement IA-CEPA in April »
back to top
INTERNATIONAL NEWS