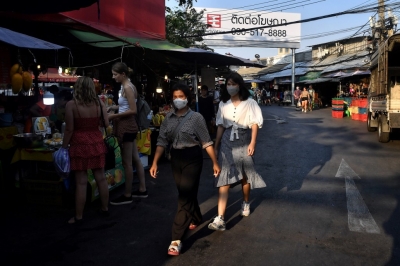 Thailand's confirmed coronavirus cases rose by a third to nearly 600, the kingdom announced Sunday, as fears of a full-blown crisis take hold in a country largely spared until now.

Thailand's health ministry announced the spike was mainly in the capital, but warned residents of Bangkok not to leave and risk spreading the virus around the country.

"We would like you to stay home. Do not travel upcountry," said health ministry official Taweesin Visanuyothin.

Southeast Asia has so far been spared the worst of the pandemic that has swept the world, confining nearly one billion to their homes and killing more than 13,000.

But that could be about to change.

With a boxing stadium and night club among the likely transmission sites, Bangkok has now imposed tough restrictions.

Virtually all public spaces have been shuttered, from shopping malls and beauty parlors to golf courses and swimming pools.

Residents packed out supermarkets over the weekend to stockpile food, fearing a full lockdown.

Bangkok Airways and Thai AirAsia have cancelled all international flights while Thai Lion Air has grounded its fleet entirely.

Yet elsewhere in the tropical tourist destination, life continued unabated with beaches in Pattaya and Phuket thronged with sun-seekers.

One doctor at Bangkok's Chulalongkorn hospital warned tougher measures were needed -- even calling for three weeks of martial law to force people to self-isolate.

The nation is "on the verge of a crisis" and heading for the Italian model, a doctor told AFP, adding hospitals are already straining under the pressure.

Meanwhile Vietnam on Saturday imposed a blanket ban on all foreigners entering the country, even though the number of confirmed cases still hovers below 100.

In under-developed Myanmar and Laos, there is increasing skepticism about claims of zero cases as fears grow for the their decrepit healthcare systems and fragile economies.