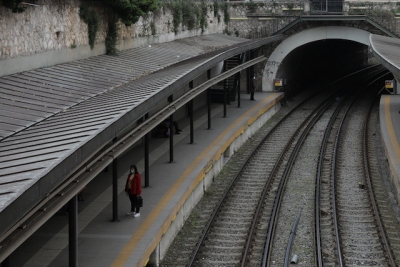 Greece announced a lockdown on Sunday, restricting movement from Monday morning with only a few exceptions, to combat the spread of coronavirus.

"It is maybe the last step, one that must be taken promptly and not in vain," Prime Minister Kyriakos Mitsotakis said in a televised address. "We have to protect the common good, our health."

Greece confirmed 94 new cases on Sunday, its largest single-day jump, taking its total to 624, with 15 deaths, up two.

Citing Italy, which reported almost 800 new deaths on Saturday, Mitsotakis said it was his duty to prevent such a tragedy hitting Greece.

"We must not get to the point where we will have to choose who lives and who dies," he said.

Only those going to or returning from work, shopping for food or medicines or visiting a doctor will be allowed onto the streets from Monday.

Public gatherings were restricted to 10 people and authorities subsequently ordered hotels across Greece to close until April 30, stepping up measures to prevent the spread of the COVID-19 respiratory disease.

Greeks have for the most part heeded the government's call to stay home and practice social distancing. But some opted to flee to the islands or head to their countryside homes, defying official warnings of contagion risks.

This prompted the government to ban such trips on ferries and allow them only for island residents.

Mitsotakis said he would not allow a frivolous few to undermine the safety of most.

"Staying at home is essentially the most profound demonstration of our collective duty," he said.

Effective from Monday, people venturing out of their homes to head to or return form work will have to carry a completed form detailing their residence, work address and working hours or otherwise face a 150 euro fine if stopped by the police.

All other allowed reasons to be on the streets - to visit a pharmacy, doctor, bank, food store or supermarket as well as to walk a pet and for physical exercise - will require a completed form or notifying the civil protection ministry via text messaging and mentioning the reason one has to be outside.

"We do not circulate outside for no reason. We stay at home," crisis management minister Nikos Hardalias told reporters.