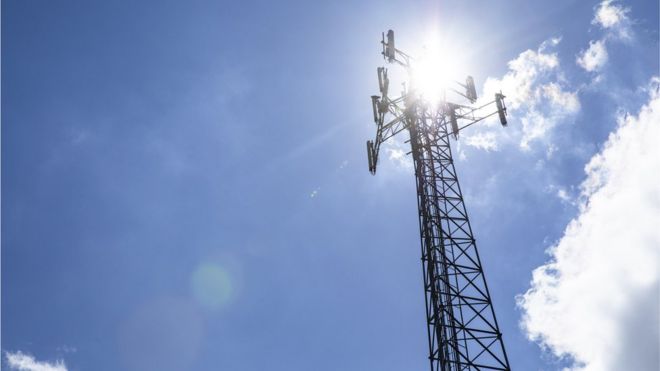 Mobile phone mast fires are being investigated amid conspiracy theories claiming a link between 5G and coronavirus.There have been fires at masts in Birmingham, Liverpool and Melling in Merseyside. A video, allegedly of the blaze in Aigburth, was shared on YouTube and Facebook, claiming a link between the mobile technology and Covid-19. Cabinet Office minister Michael Gove said it was "dangerous nonsense". The Department for Digital, Culture, Media and Sport said on Twitter "there is absolutely no credible evidence" of a link, while trade body Mobile UK said such rumours and conspiracy theories were "concerning".  Merseyside Police said an investigation is under way after the telecommunications box in Aigburth caught fire on Friday. A video of what appears to be the incident, which happened shortly after 22:00 BST, was shared on YouTube.Verification from the BBC's disinformation team suggests the video is authentic, however, it is unclear whether the box has anything to do with 5G technology. Merseyside Fire and Rescue Service said it is also investigating a blaze it extinguished at a 5G mast in the village of Melling, north of Liverpool, on Friday night. West Midlands Fire Service said the fire in Birmingham involved a 70ft tower on a telecommunications site. However, it said the cause was yet to be identified and it could not confirm the mast was 5G//BBC