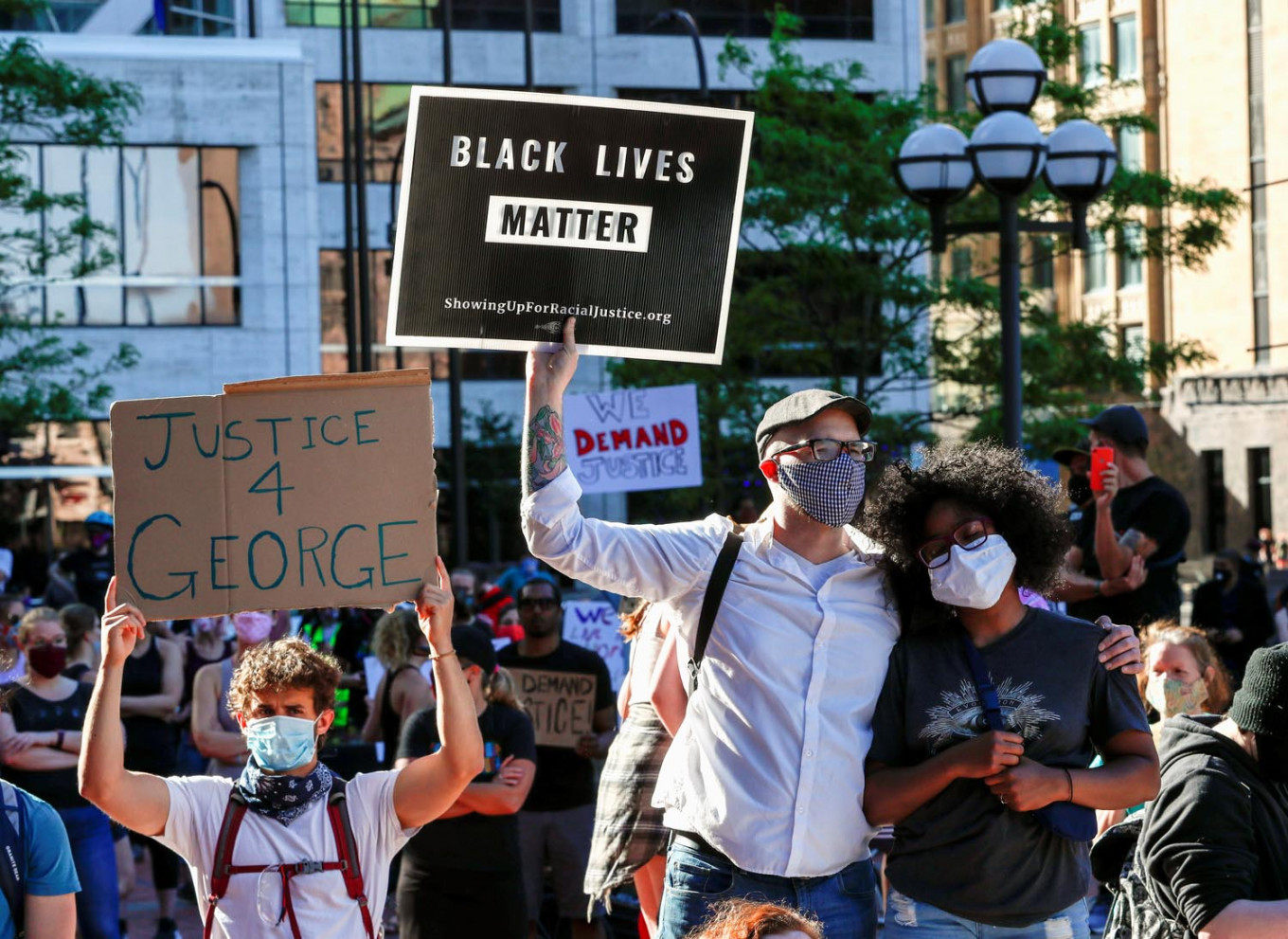 People gather outside the Hennepin County Government Center to protest the death of George Floyd, an unarmed black man, arrested by police officers in Minneapolis, Minnesota, US. May 28, 2020. (Reuters/Eric Miller)

be "futile" as he denounced the death of a black American that has led to violent protests across the US.

Mohammad-Bagher Ghalibaf, a former commander of the Revolutionary Guards' air force, was elected speaker on Thursday of a chamber dominated by ultra-conservatives following February elections.

The newly formed parliament "considers negotiations with and appeasement of America, as the axis of global arrogance, to be futile and harmful," he said in his first major speech to the chamber.

Ghalibaf also vowed revenge for the US drone attack in January that killed Qasem Soleimani, the commander of the Guards' foreign operations arm.

"Our strategy in confronting the terrorist America is to finish the revenge for martyr Soleimani's blood," he told lawmakers, pledging "the total expulsion of America's terrorist army from the region".

Ghalibaf has also slammed the US over the death of George Floyd, an unarmed black man, during an arrest in Minneapolis which has led to widespread protests across the country.

Tens of thousands of protesters have taken to the streets from New York to Seattle demanding tougher, first-degree murder charges and more arrests over the death of Floyd, who stopped breathing after Minneapolis police officer Derek Chauvin knelt on his neck for nearly nine minutes.

Decades-old tensions between Tehran and Washington have soared in the past year, with the sworn arch enemies twice appearing to come to the brink of a direct confrontation.

The tensions have been rising since 2018, when President Donald Trump withdrew the US from a landmark nuclear accord and began reimposing crippling sanctions on Iran's economy.

That was followed by the US drone strike near Baghdad airport in January that killed Soleimani, a hugely popular figure in the Islamic republic.

Days later, Iran fired a barrage of missiles at US troops stationed in Iraq in retaliation, but Trump opted against taking any military action in response.

Ghalibaf called for ties to be improved with neighbours and with "great powers who were friends with us in hard times and share significant strategic relations", without naming them.

The 58-year-old Ghalibaf is a three-time presidential candidate who lost out to the incumbent Hassan Rouhani at the last election in 2017.

The newly elected speaker had also served as Tehran mayor and the Islamic republic's police chief before taking up his latest post.

In a tweet on Saturday, he slammed what he called the United States' "unjust political, judicial, and economic structure".

This had been "pumping war, coups, poverty, indiscrimination, torture, fratricide and moral corruption to the world, and racism, hunger, humiliation, and 'choking by knee' in its own country for hundreds of years", Ghalibaf said.

"What can one call it if not the Great Satan?" he added, using Iran's term for its arch enemy.

"Some don't think #BlackLivesMatter. To those of us who do: it is long overdue for the entire world to wage war against racism. Time for a #WorldAgainstRacism," he said.

The post was accompanied by an image of a 2018 statement by US Secretary of State Mike Pompeo in which the text was changed to be critical of the United States instead of Iran.

The altered text read: "The US government is squandering its citizens' resources.

"The people of America are tired of the racism, corruption, injustice, and incompetence from their leaders. The world hears their voice."

Pompeo responded to Zarif by tweeting that "you hang homosexuals, stone women and exterminate Jews", without elaborating further. (JP)

More in this category: « F1 season to open in Austria after government backs Spielberg double act Clashes outside White House as US cities under curfew »
back to top
INTERNATIONAL NEWS