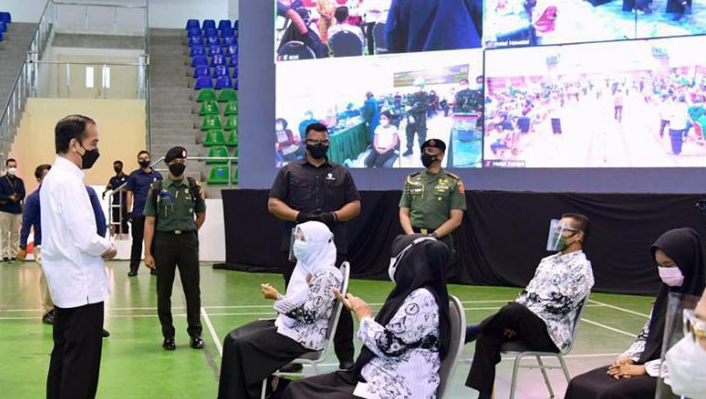 President Joko Widodo (Jokowi) has called on all regional government heads to support the realization of the central administration's daily vaccination target of 700 thousand to one million doses by conducting mass vaccination activities.While reviewing a mass vaccination campaign in Tangerang, Banten Province, Wednesday, the head of state attached significant importance to the local governments' support in the realization of the national vaccination target."This afternoon, I just saw the mass vaccination process in Tangerang District, Banten, for some 10 thousand members of the general public, including the elderly and those from the other age brackets, as well as educators, every one of them," the president noted in a virtual press statement posted on the Presidential Secretariat's YouTube channel here on Wednesday.The head of state witnessed that the vaccination activities on the field were running smoothly. The president is keen that the mass event in Tangerang is also conducted in other areas."Thus, we can catch up with (the target to vaccinate) up to 700 thousand people per day for the month of June and 1,000,000 per day (in July)," he affirmed.The president thanked the Banten governor, Tangerang district head, and health minister for their persistent efforts in conducting the COVID-19 vaccination program."We are optimistic of this protecting us all from the spread of COVID-19," he remarked.Earlier, while reviewing the implementation of mass vaccination at the University of Indonesia Hospital, Depok, on Wednesday morning, Jokowi had also stressed on the significance of achieving the vaccination target of 700 thousand doses per day in June and one million doses per day in July.While reviewing the implementation of mass vaccinations at RSUI Depok, the president witnessed firsthand the implementation of vaccinations applying a drive-through system for two- and four-wheeled riders. (Antaranews)