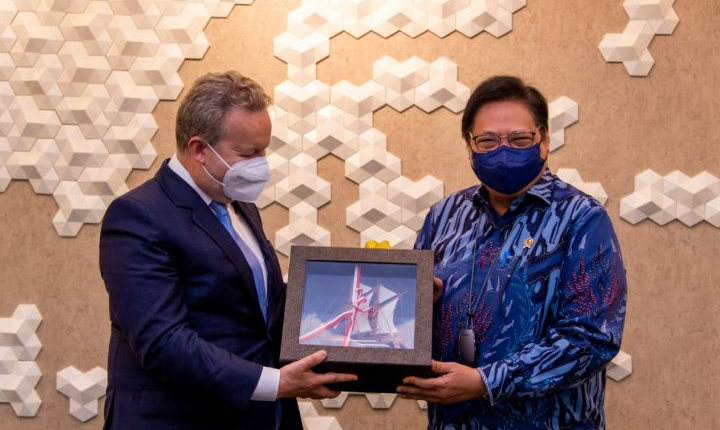 Czech Environment Minister Richard Brabec has assured that the European Union (EU), under the presidency of the Czech Republic, will support Indonesia’s efforts to develop sustainable palm oil.He also stressed that the EU will, by no means, impose any import ban on Indonesian palm oil.To that end, the Czech Republic will continue to coordinate and consult with the European commission and parliament to support Indonesia’s efforts, he said following a meeting with Indonesia’s Coordinating Minister for Economic Affairs, Airlangga Hartarto, in Jakarta.Czech Ambassador to Indonesia, Jaroslav Dolecek, Vice Minister of Industry and Trade, Martina Tauberová, and president of the Czech Republic Industrial Confederation, Jaroslav Hanák, also attended the meeting.During the meeting, the two countries decided to intensify cooperation in environmental conservation, including the handling of urban garbage and the management of plastic waste, in which the Czech Republic has excellence, experience, and expertise.They also identified several areas of cooperation in the field of renewable energy, including geothermal and solar energy, to lower gas emissions and the development of battery technology for electric cars.As a fellow coal producer, the Czech Republic is ready to assist Indonesia in the use of clean and environmentally friendly coal, Brabec said.During the meeting, the two countries also agreed on an exchange of experts in the field of mineral resources through the creation of a working group under the bilateral cooperation mechanism.Indonesia has made persistent efforts to meet the nationally determined contributions (NDC), in accordance with the target of the Paris Agreement and the Sustainable Development Goals (SDGs), Hartarto said.Indonesia is strongly committed to achieving the target of reducing gas emissions by 29 percent on a self-reliant basis and by 41 percent with international support and collaboration, he added.During the meeting, the Czech Republic lauded Indonesia’s efforts to lower the deforestation rate in the country and reiterated its readiness to support and work more closely with Indonesia in the field of forestry. (Antaranews)