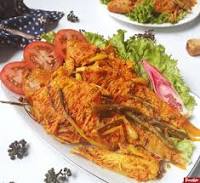 Indonesia is well- known with its culinary which is delicious and rich of taste. Without the exception in North Sumatera, there is Batak typical food, called ‘Arsik’ which is very delicious and arousing appetite. Arsik is Batak typical food which is very delicious because the food is rich of various kinds of ingredients. Another name of the food whose raw stuff is golden fish is called ‘Na Niarsik’. The name is taken based on cooking process. Na Niarsik means its cooking process by dimarsik or being dried. So, the fish is cooked continuouslyuntil its sauce dries and its ingredients are absorbed into the fish. Arsik is very important in Batak tradition. According to people’s belief, fish which is cooked wholly is a symbol of the unity of human life. Thus, Arsik is a very common dessert because it is closely related to the indigenous philosophy of the Batak community. In certain traditional ceremony, there is special way in serving Arsik. Besides, the fish must be intact from head until tail; its scales cannot be thrown away. Besides, the position of the fish head to be served is facing to someone who receives it. The number which is given must be odd such as one, three, five and seven. One fish is given to new brides. Three fishes are for a pair of wife-husband who has kid. Meanwhile, five fishes are for a couple or old people who have grandchildren and seven fishes are for the leader of Batak people. The number of Arsik, which is given in variety, has a meaning in it. Take for example; three fishes are given to a pair of husband and wife who have kid. It is to symbolize that their family’s member has added one person.  One for father, one for mother and another is for kid who was just born.  Meanwhile, for a couple who just married, the number of fish which is given by the parent of the girl is only one because it is to symbolize that the two persons, who got married, have become one.