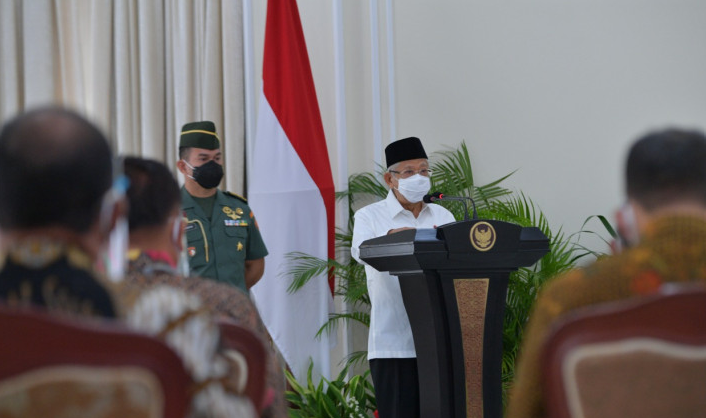 Vice President Ma'ruf Amin has assured that the government is still able to guarantee food availability for the public with the "promising" production of 11 main food commodities.

"Alhamdulillah (praise be to Allah), the government can secure the availability of 11 main food commodities for 273 million Indonesians," the vice president remarked at the Vice President's Palace here on Monday.The 11 food commodities are rice, corn, onions, garlic, large chili, cayenne pepper, beef, chicken, chicken eggs, granulated sugar, and cooking oil.Amin affirmed that national rice production is "very promising" so food availability for the public is guaranteed."National rice production in the last two years has also been favorable. Until the third week of August 2021, rice stocks reached 7.6 million tons," he revealed.The condition of food stocks in the country is quite conducive as it is followed by an increase in the performance of agricultural exports from Indonesia, Amin said.Citing data from Statistics Indonesia (BPS), the vice president said agricultural exports in January-July 2021 reached US$2.24 billion, an increase of 8.72 percent compared to the same period last year.Meanwhile, Agriculture Minister Syahrul Yasin Limpo stated that his ministry would continue to strengthen cooperation with local governments and create policies to fulfill people's needs for food."Stimulus and action plans must continue to be carried out so that the sector keeps growing positively until it becomes a savior for the country to be not trapped in a prolonged economic recession," Limpo explained.The Agriculture Ministry has established five measures for increasing agricultural production: enhancing production capacity through mechanization, building efficiency and using appropriate technological approaches, local food diversification, strengthening food reserves and logistics systems and the Triple Export Movement (Gratieks), he noted."Synergy between the center and the region is important so that there is no more development inequality between them, or with one to the other region," he said.  (Antaranews)