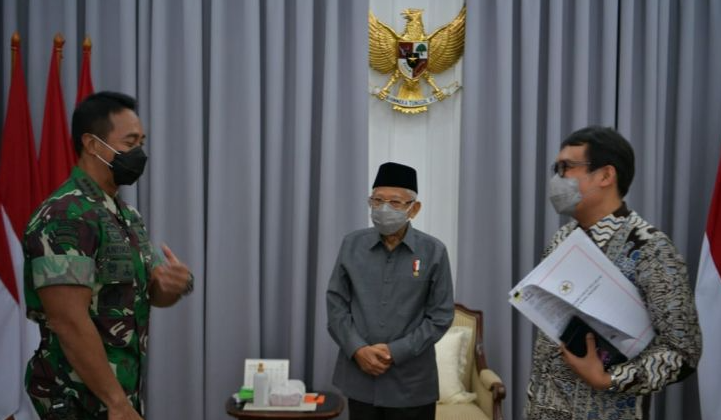 Vice President Ma'ruf Amin has called on Indonesian Military (TNI) Chief General Andika Perkasa to intensively monitor development of the people's welfare in Papua.Vice President's spokesman Masduki Baidlowi remarked that the message was conveyed directly by Ma'ruf Amin to Andika during their meeting at the Vice President's official residence here on Wednesday.Amin also called on the former Army Chief of Staff to continue to monitor the situation in Papua and West Papua with regard to accelerating development in the provinces."The vice president urged (Andika) to continue to monitor development of the national conditions, especially in Papua, as the vice president has the responsibility to improve the welfare of Papua," he expounded.Earlier, on Tuesday (Nov 23), Andika Perkasa and the Indonesian Police (Polri) Chief General Listyo Sigit Prabowo discussed security handling measures in Papua.During the discussion at the National Police Headquarters, Andika spoke of his intent to soon visit Papua to deliver the strategy for handling the Papua issue."Later, hopefully, next week, I will go to Papua, and I will announce it there," Andika stated at the Jakarta Police Headquarters.The meeting also discussed the security situation in Papua to avoid the overlapping of tasks between the TNI and Polri. (Antaranews)