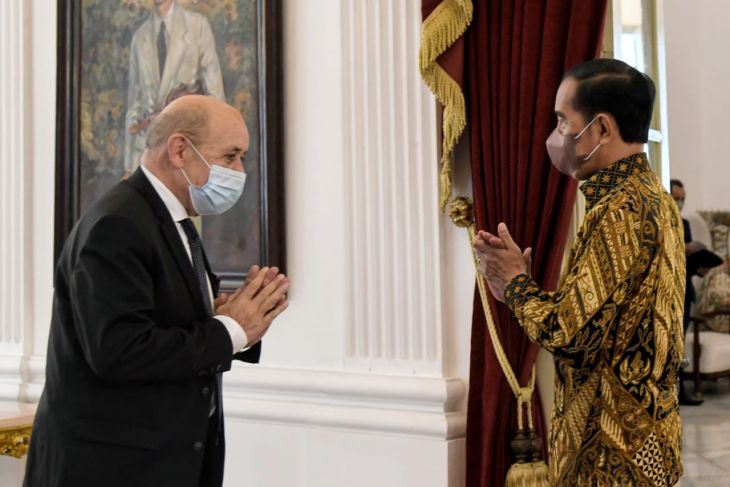 President Joko Widodo (Jokowi) received France's Minister for Europe and Foreign Affairs, Jean-Yves Le Drian, at the Merdeka Palace in Jakarta on Wednesday to discuss cooperation between the two countries.“I would like to convey several messages. First, we agree to increase communication next year when Indonesia becomes the G20 chair and France becomes the European Union president,” he said.He expressed the hope that during France’s Presidency of the EU, negotiations on the Comprehensive Economic Partnership Agreement (CEPA) between Indonesia and the EU would be expedited to achieve concrete results.President Jokowi also said he hoped that France would become Indonesia’s partner in the struggle for open, fair, and non-discriminatory trade, adding he supports sustainable trade.“I highly support sustainable trade but I object to (any effort to) misuse environmental issues as trade barriers,” he remarked.The President warmly welcomed the effort to enhance the partnership between the two nations through the new dialog mechanism and the 2+2 meeting (foreign and defense ministerial meeting).He then thanked France for its vaccine assistance of 4.8 million doses to Indonesia.At the meeting, President Jokowi was accompanied by Foreign Minister Retno Marsudi and Cabinet Secretary Pramono Anung, while Le Drian arrived with the French Ambassador to Indonesia, Oliver Chambard.  (Antaranews)