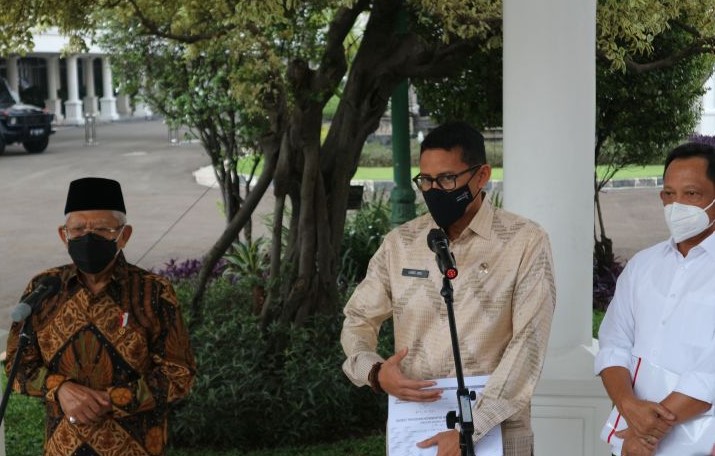 Tourism and Creative Economy Minister Sandiaga Salahuddin Uno has said that his ministry has been asked to create national and international recreational sports festivals to encourage the advancement of Indonesian sports human resources.He delivered the statement at the Vice President’s Palace in Jakarta on Thursday after attending a meeting on the Great Design of National Sports (DBON) implementation, led by Vice President Ma'ruf Amin."Sports-based tourism has become one of the sectors which are currently developing amid the pandemic,” he noted.Sports tourism and recreational sports activities are in line with the implementation of DBON, he added.Hence, to increase Indonesian people’s enthusiasm for sports activities, described as "sports fever" by Vice President Amin, the minister said that recreational sports such as jogging and cycling can be developed as competitive sports."Recreational sports are a major part of the implementation of DBON as we see that running and other activities have become very popular recently,” he noted.He said that currently, the public’s enthusiasm toward recreational sports has not yet had any direct impact on the improvement in national sports achievement.However, he acknowledged that the initiatives have encouraged more people to take physical exercise.Hence, it is expected that more talents in various sports can be identified through the implementation of recreational sports activities.Furthermore, Uno said that a number of competitive and recreational sporting events have been initiated by the Tourism and Creative Economy Ministry, for instance, the Pertamina Grand Prix of Indonesia, which was hosted at the Pertamina Mandalika International Street Circuit from March 18–20, 2022.“We also have several open water swimming activities, such as ‘Oceanman,’ which will be held in July 2022 in Bali province. Furthermore, the Samosir Ultra Run will be implemented at Lake Toba, which is a super-priority tourism destination," he informed.Since the events are nature-based activities, there is no need to build many sporting venues as swimming competitions can take place in lakes or seas, while running competitions can be held as trail runs, he noted."This is interesting. We have the potential natural landscape for hosting such events, thus we will develop it to encourage our tourism and economic revival as well as to create jobs," he added.  (Antaranews)