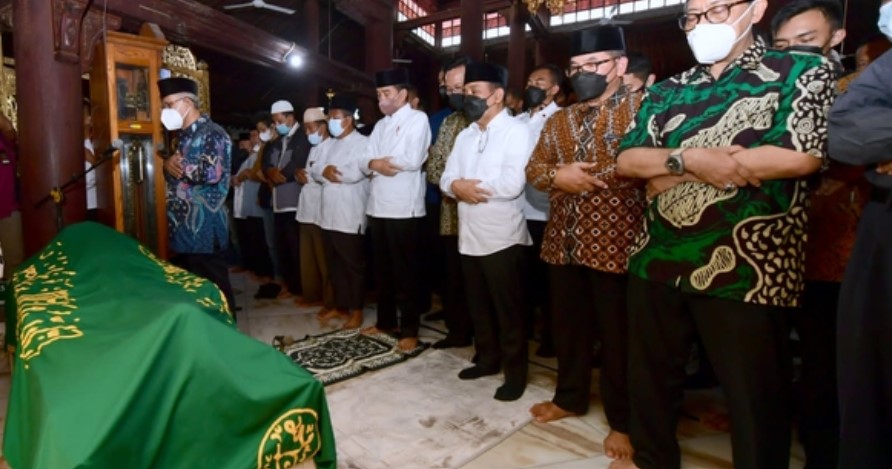 President Joko Widodo said that the figure of Buya Syafii Maarif was a national teacher who lived in simplicity.

This was conveyed by the President, after paying homage and conveying his condolences directly for the death of the deceased, at the Gedhe Kauman Mosque, Yogyakarta, Friday (27/5/2022).

"He is the best cadre of Muhammadiyah who always voices about diversity and always speaks about religious tolerance and he also always conveys the importance of Pancasila for the glue of the nation," said the President in a press statement received by RRI.

President Jokowi also invited the Indonesian people to pray for the deceased to get the best place in the sight of Allah SWT.

"We all belong to Allah and only to Him will we return. Let's pray together that the late Buya Syafii Maarif is given the best place by His side and all sins are forgiven, amen, rabbal alamin," he said.

The President arrived at the location at around 15:05 WIB. After arriving, the Head of State immediately performed the congregational Asr prayer.

After that, the President performed a funeral prayer in the congregation with the imam of the General Chairperson of PP Muhammadiyah Haedar Nasir. President Jokowi also attended the procession of final respect for the deceased.

Furthermore, President Jokowi said goodbye to the wife of the deceased, and helped escort the body out of the mosque to the hearse. After that, the President together with his entourage headed to the Adi Sutjipto Air Force Base to return to Jakarta.

Also accompanying the President during the pilgrimage was Minister of State Secretary Pratikno and Governor of the Special Region of Yogyakarta Sri Sultan Hamengkubuwono X. (RRI)