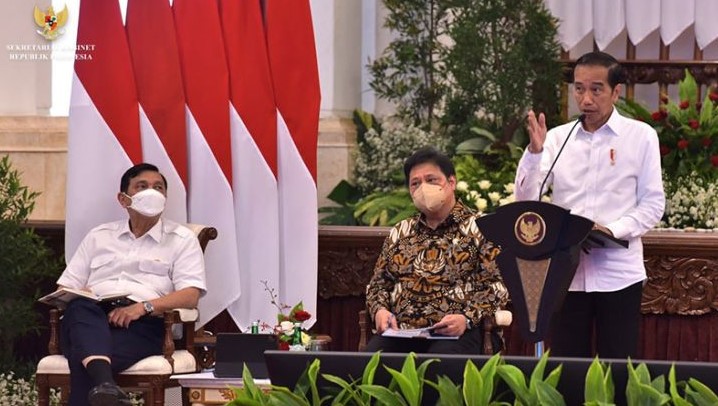 President Joko Widodo (Jokowi) has asked his ministers to ensure that the utilization of this year's food resilience budget of Rp92.3 trillion (US$6.2 billion) produces concrete results."This is a huge amount. What are the results every year? What are the concrete (results)? It must be clear. Otherwise, we will spend Rp92 trillion to buy rice for stock," the President remarked during a plenary meeting with his cabinet members at the State Palace, here on Monday.Of the total Rp92.3 trillion, Rp36.5 trillion has been earmarked for relevant ministries and agencies, namely the Ministry of Agriculture (Rp14.5 trillion), the Ministry of Maritime Affairs and Fisheries (Rp6.1 trillion), the Ministry of Public Works and Public Housing (PUPR) (Rp15.5 trillion), and other ministries (Rp0.6 trillion), he informed.At the PUPR Ministry, the budget will be used to complete the construction of nine dams, among other things. They will add to the 29 dams that have been completed out of the 61 dams that are currently under construction, he noted.Jokowi asked the PUPR Ministry to also use the budget for building infrastructure that can be directly utilized by the people, such as small reservoirs and irrigation systems.Amid the current global food crisis, Indonesia must use opportunities for strengthening the food resilience program as there is not much time, he added.He further said that Rp 33.8 trillion of the 2022 food resilience budget will be allocated for providing fertilizer subsidies amounting to Rp25.3 trillion, funding rice reserve expenditure of Rp3 trillion, food price stability spending Rp2.6 trillion, and fertilizer subsidy reserves Rp2.9 trillion."This is huge. It must be clear where it is going, what its benefits are. Once again, we are in an uncertain and unfavorable world atmosphere," he added.The remaining Rp21.9 trillion will be transferred to the regions in the form of a special allocation fund (DAK).President Jokowi reminded that the threat of a food crisis from the long-term impact of the COVID-19 pandemic and the prolonged Russian military invasion in Ukraine should be responded to carefully and the existing opportunities must be utilized optimally.These opportunities exist because Indonesia still has a large area of land and the support of human resources, in this case, farmers, to produce food.He also informed that several countries have asked Indonesia to export at least 100 thousand tons of rice per month, or up to 2.5 million tons for the rest of this year.  (Antaranews)