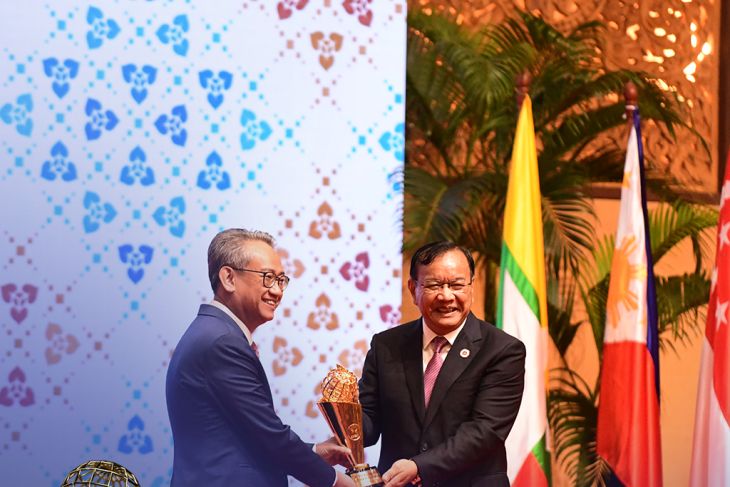 The ASEAN Prize 2021 was officially awarded to Mekong Institute by the ASEAN in recognition of its long-standing contributions to promoting ASEAN awareness and strengthening regional cooperation towards driving sustainable development and economic growth.Cambodian Deputy Prime Minister and Foreign Minister Prak Sokhonn and Secretary General of ASEAN Lim Jock Hoi presented the ASEAN Prize trophy to the Mekong Institute Executive Director Suriyan Vichitlekarn, as noted in a release issued by the ASEAN Secretariat and received here on Thursday.The trophy was presented during the 55th ASEAN Ministerial Meeting and Related Meetings in Phnom Penh, Cambodia, on Wednesday (August 3).Due to the COVID-19 restrictions in place, the official announcement was made separately during the 38th and 39th ASEAN Summit and Related Summits in Bandar Seri Begawan last year.Mekong Institute, a research institute and community development centre based in Khon Kaen, Thailand, also received a monetary prize of US$20 thousand sponsored by the Temasek Foundation and Yayasan Hasanah.Established in 1996, Mekong Institute has been acknowledged as one of the region’s driving forces in accelerating and promoting prosperous and harmonious sub-regional development, particularly in the areas of capacity building and sustainable community development.The institute’s aspiration and long-standing commitment radiating through multi-institutional engagement as well as cross-sectorial cooperation are deeply aligned with an inclusive, cohesive, and resilient ASEAN Community, the ASEAN Secretariat said in its statement.Administered by the ASEAN Secretariat, the ASEAN Prize is an annual regional premier award that recognises outstanding and inspiring achievements of individuals or organisations based in the ASEAN that have significantly contributed to community-building efforts.Since 2018, the ASEAN Prize has bestowed the award to four exemplary recipients.Erlinda Uy Koe, a Filipino autism advocate, received the inaugural ASEAN Prize in 2018 for her contributions to foster an inclusive ASEAN Community.In 2019, Malaysian humanitarian leader Dr Jemilah Mahmood was selected as the ASEAN Prize recipient in recognition of her dedication in providing emergency needs and humanitarian response to the marginalised and affected population in the region.In 2020, the ASEAN Studies Centre of ISEAS – Yusof Ishak Institute, a Singapore-based regional research centre, was awarded the ASEAN Prize for long-standing contributions in promoting ASEAN awareness through academic outreach and engagement with stakeholders.  (Antaranews)