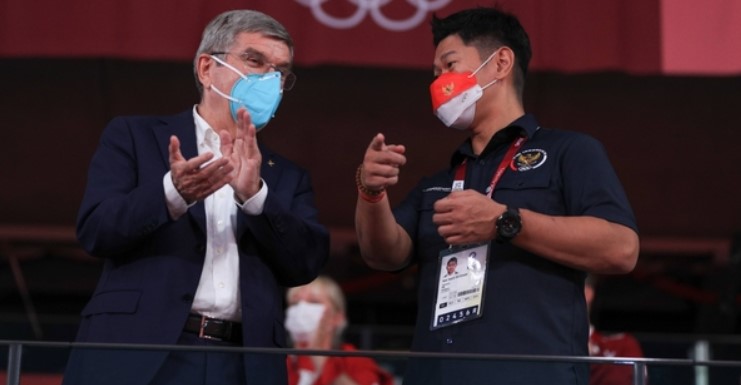 The Indonesian Olympic Committee (NOC Indonesia) welcomes the nomination to host the 2036 Olympics in the National Capital City (IKN) of the Archipelago, East Kalimantan. The nomination is a directive from President Joko Widodo and NOC Indonesia is committed to working hard to make it happen.

"We welcome the direction of the President to continue bidding for the 2036 Olympics with the location at IKN. We will carry out this task and work hard so that Indonesia will emerge as the first ASEAN country to host the Olympics," said the Chairman of the Indonesian Olympic Committee Raja Sapta Oktohari, Thursday (4/8/2022).

Through the Minister of Youth and Sports (Menpora) Zainudin Amali, Indonesian President Joko Widodo conveyed that Indonesia would continue the bidding process for the 2036 Olympics in the State Capital (IKN). This was said by the Minister of Youth and Sports after accompanying President Joko Widodo who met PSSI Chairman Mochamad Iriawan, Wednesday (3/8/2022).

On that occasion, the government also plans to build a sports training center with complete facilities, both main and supporting. Including soccer practice facilities which will later be used as a training center.

Oktohari said that the plan to build a sports training center would be submitted to the Future Host Commission, part of the International Olympic Committee (IOC), which is tasked with selecting the bidding process for the country that would host the Olympics.

Indonesia has been involved in the bidding process because previously it was aiming to become the organizer in 2032. The bidding for the Olympic host was made by the NOC as stated in Point 4 of NOC's Tasks in the Olympic Charter.

“We have a continuous dialogue status in the bidding process, and we will continue it because the current IOC format prioritizes permanent, ongoing dialogue. This was said by IOC President Thomas Bach when I met at the 2020 Tokyo Olympics, according to him, Indonesia should continue the bidding process for the Olympics because the process is still ongoing," said Oktohari.

"With IKN as the venue, we are optimistic because one of the points being assessed is the venue for the master plan to sustainability and legacy."

Oktohari assessed that the 2023 ANOC World Beach Games in Bali, August 5-12, could be a positive momentum to realize the mission to host the Olympics. Because there will be 1,200 athletes from more than 100 countries. This is the largest water and beach sports multi-event from the number of contestants from participating countries.

Not only that, 205 NOCs around the world will also be on the Island of the Gods to participate in the ANOC General Assembly. Also attending were high-ranking international sports organizations, such as IOC President Thomas Bach, ANOC President Robin Mitchell, and WADA President Witold Banka.

"The AWBG will be an important momentum for Indonesia to approach it directly so that we can get support and prove that Indonesia is ready to host the Olympics," said Oktohari. (RRI)