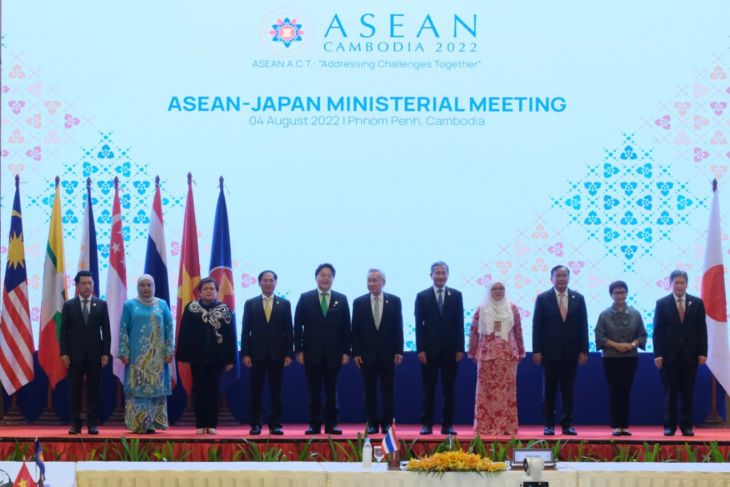 Indonesia supports the strengthening of cooperation between the Association of Southeast Asian Nations (ASEAN) and Japan in the Indo-Pacific region, Indonesian Foreign Minister Retno Marsudi has said."Indonesia hopes that mutually beneficial and inclusive concrete cooperation in the Indo-Pacific can be put forward in the future ASEAN-Japan partnership," Marsudi said at the ASEAN-Japan Ministerial Meeting in Phnom Penh, Cambodia, on Thursday.In a statement issued the same day, the Indonesian Foreign Minister said that ASEAN already has the ASEAN Outlook on the Indo-Pacific, which accords priority to four areas of cooperation— maritime, connectivity, achievement of sustainable development goals (SDGs), as well as trade and investment.It is hoped that this concrete and inclusive cooperation would contribute to peace, stability, and prosperity in the Indo-Pacific.In addition to cooperation in the Indo-Pacific, Indonesia has also emphasized the importance of ASEAN and Japan continuing their cooperation for building regional health resilience.Japan has collaborated with ASEAN to establish the ASEAN Center for Public Health Emergency and Emerging Diseases (APCHEED) in Indonesia, Thailand, and Vietnam. Further cooperation is needed to run the three health centers.Some of the priorities that can be carried out to achieve this end include investment, research, training for health workers, and strengthening the health industry.Marsudi also welcomed the celebration of 50 years of ASEAN-Japan relations next year. She said she hopes that the celebrations will be used as a momentum to strengthen cooperation.Along with Indonesia's chairmanship of ASEAN in 2023, the ASEAN-Japan Summit, which will mark 50 years of their relations, will also be held in Tokyo and will be themed “Golden Friendship, Golden Opportunities.”The ministerial meeting adopted a concept paper for the summit marking the 50th year of ASEAN-Japan friendship and cooperation. (Antaranews)