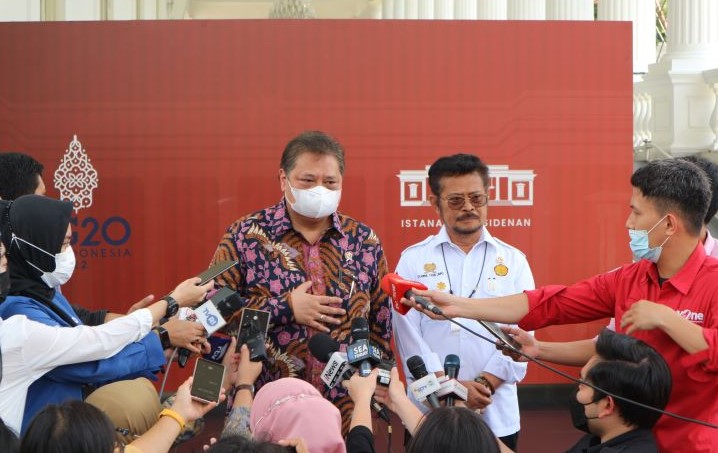 Coordinating Minister for Economic Affairs Airlangga Hartarto highlighted President Joko Widodo's directives to no longer rely on imports for domestic soybean stocks."Mr President wants to not be 100-percent dependent on imports (for domestic soybean stocks), because of almost all the demand for 2.4 (million tons, source from) national production continues to decline," Minister Hartarto stated at the Presidential Palace here on Monday.Hartarto made the statement after attending a meeting at the Merdeka Palace, led by President Jokowi, to discuss governance and boost soybean productivity.To this end, President Jokowi urged State-Owned Enterprises (BUMN) to purchase the commodity from farmers at a predetermined price."Hence, to reach that price, there will be an assignment for SOEs, so that farmers can produce. That is (set) at a price of Rp10 thousand (per kilogram)," he remarked.The price being unappealing to farmers was one of the reasons behind their hesitation to plant soybeans lately.He pointed out that farmers found it unfeasible to grow soybeans if the price was below Rp10 thousand per kg, as the product imported from the United States was priced at only Rp7,700 or even cheaper."Hence, in 2018, for example, we produced 700 thousand hectares, and now, it is at 150 thousand hectares. Hence, if farmers are urged to choose if they rather grow corn or soybeans, then they all (choose) corn. Now, we want everything to be mixed, not only corn but also soybeans (production) can go up," he elaborated.The head of state also gave the second directive in which he encouraged farmers to use superior seeds that have been genetically modified (GMOs). Using these seeds is expected to aid in multiplying soybean production per hectare."By using GMOs, the production per hectare can increase, from the current 1.6-2 tons per hectare, to 3.5-4 tons per hectare," he remarked.The next measure was for the government to prepare a budget for the expansion of soybean planting areas, from the current 150 thousand hectares to 300 thousand hectares and to 600 thousand hectares next year. The government has been striving to pursue its target of one million hectares of production in the next few years."The budget has been prepared for around Rp400 billion, and next year, it will also be increased, from 300 (thousand) to 600 thousand hectares. The existing one is about 150 thousand hectares. Thus, the production target of one million hectares is pursued for the coming two to three years," the minister added.For other commodities, such as shallots, cayenne pepper, and curly red chili, Hartarto highlighted President Jokowi's request that production centers in Solok and Indragiri, West Sumatra Province, and Brebes in Central Java should continue to boost their production rate."Mr President asked for production to continue to be increased and for cold chain or cold storage to be provided, and it will also be assigned to SOEs to work on it. Hence, of course, hopefully, all of these farmers' production can be fully (absorbed)," he remarked.He also reminded the regional government of President Jokowi's directive which stated that they had to bear the costs of commodity transportation in order to contain the inflation rate."The current transportation distribution is conducted in accordance with the directions at the coordination meeting on inflation, transportation subsidies are applied by each regional government, but nationally, the National Food Agency and the Agriculture Ministry are assigned to pro-subsidy from transportation," he concluded. (antaranews)